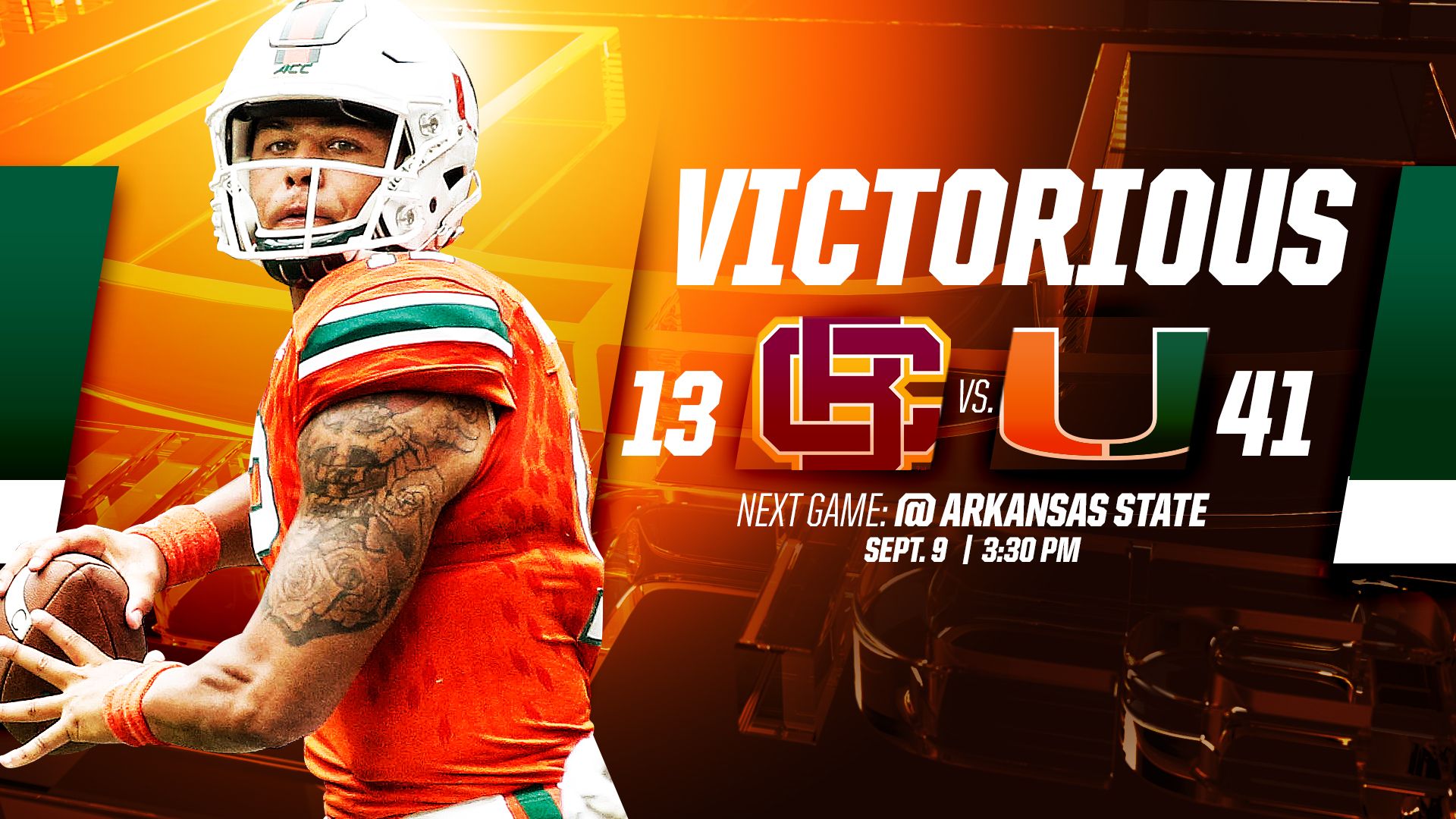 MIAMI GARDENS, Fla. – Big days by Malik Rosier and Mark Walton led the No. 18 Miami Hurricanes to a 28-point season-opening victory over Bethune-Cookman, 41-13.

Walton put on a show for the 50,454 fans at Hard Rock Stadium, rushing for a game-high 148 yards and two touchdowns on 16 carries. Saturday marked Walton’s seventh-career 100-yard rushing game, tying the Miami native for ninth all-time in career 100-yard games with Tyrone Moss.

“We ran the ball pretty darn good,” Miami head coach Mark Richt said. “Obviously, Walton had a big day, averaging over nine yards per carry and [Travis] Homer did the same. Trayone Gray had a pretty good average and Malik got in the action a little bit, which was nice. Overall, I thought they played well. The opening drive they [Bethune-Cookman] took most of the first quarter by making plays, methodically moving the ball down the field, putting points on the board. Their field goal kicker made every kick. They’re a good football team.”

Walton scored Miami’s first touchdown of the season, diving into the end zone to finish off a nine-play, 48-yard drive to put the Canes up, 10-3, with 13:31 remaining before the half. The junior’s second score came on a six-yard sprint to the left pylon, putting Miami up 31-6 just two and a half minutes into the second half.

“It felt great to go out there and run for 100 yards,” Walton said. “Coach Richt did a great job trusting us and the running backs. Our offensive line did a great job, picking up key blocks and giving us running lanes and we just took advantage of it and we just trusted our ability and ran hard.”

A powerful runner, Walton has 27 career touchdowns in 27 games with the Hurricanes – including 25 rushing scores. The junior, who played his first game since the passing of his mother in March, was able to focus on football despite missing his biggest fan in the stands.

“I mean to be honest, it was just regular preparation,” Walton said. “I haven’t let that [his mother’s passing] be on my mind. I just try to block it out throughout the course of the day from yesterday to today during the meetings. All the meetings just crossed everything out in my mind that I was thinking about. I saw my family today in the stands and that’s all that matters. I was missing one, but I wasn’t trying to get too emotional. I was just trying to go out there and play for my team.”

Rosier had an impressive home debut, completing 17 of 28 passes for 217 yards and a career-high three touchdowns. Making just his second career start, the redshirt junior connected with Lawrence Cager and Darrell Langham for five-yard touchdowns in the first half, while finding senior Braxton Berrios for a 22-yard strike late in the third quarter that gave Miami a 25-point lead, 38-13.

“It was a lot of fun,” Rosier said of his first home start. “For the last five, six months, we’ve been going against our defense. It was nice to see them bang against people besides us. They did a great job. Like Coach [Richt] said, it was great, but that’s not championship-level. That’s not what we need. We’re going to go back through, we’re going to fix the mistakes that we had and we’re going to get ready for Arkansas State. So, that’s the big thing; we’ve got to keep going forward now.”

Rosier made several impressive throws on the afternoon, including a 46-yard connection deep to Langham midway through the second that put Miami deep in the red zone at the Bethune-Cookman eight-yard line and set the Canes up for Cager’s second-career receiving touchdown. In addition to his strong day passing Rosier was a threat with his legs, carrying the ball four times for 41 yards – including a 23-yard sprint on Miami’s first play from scrimmage.

“He handled the game well and his decisions, I thought, were pretty darn good,” Richt said. “I thought the fact that he never put the ball in harm’s way was great. I thought he mostly made the right decision. We have different reasons why we might work this side of the field or that side of the field, or if we’re making a pure progression on a play, maybe he missed the first progression once or twice and went to the second, but I thought he was pretty good. His accuracy overall was good. He missed one or two [throws] that we’d like to have back, I’m sure. A little bit of hidden yards – one time they were getting ready to sack him and I think he got two yards. He probably gained 10 yards from the spot that he was in the pocket, and those add up. We ran a naked bootleg and actually one of our receivers fell down coming out of his break and Malik just ran. I don’t know how many yards he got on that, but I think he got a first down on that naked bootleg. Of course the first play of the game, he pulled it on a zone read play. I think he played well. There might have been one or two throws he could have hit. I thought one time rolling to his left, I think it was [Jeff] Thomas, he could have hit him on the run for a big play but he kind of overshot him a little bit. Overall, I thought he played good.”

“It felt amazing,” Langham said of leading the team in receiving. “But I feel like as a receiver corps we can probably do more, put some more yards up.”

Homer more than doubled his career rushing total, running for a career-high 103 yards on 11 carries to give the Hurricanes two 100-yard rushers in the same game for the first time since Walton (155) and Joe Yearby (121) on Sept. 10, 2016 against FAU. As a freshman a year ago, Homer rushed for 44 yards on seven carries.

Michael Badgley hit both of his field goal attempts on Saturday, converting from 27 and 50 yards, and added five PATs.

Defensively, Miami (1-0) was active in the backfield, recording seven tackles for loss – including a sack by redshirt junior Demetrius Jackson on Bethune-Cookman’s opening drive of the game that helped hold the Wildcats to a field goal.

“I think we did pretty well just running around,” Quarterman said. “Nobody was nervous. Nobody was really second-guessing themselves. You know running around today we swarmed to the ball, which was good. I think that’s the best thing that we did today.”

Malek Young had a tackle for loss and snared his second career interception with 12:38 remaining in the game, picking off Wildcats quarterback, Larry Brihm, Jr., who finished the day 22-for-35 for 212 yards and an interception.

Following the big play, the sophomore cornerback donned a “U” chain on the sidelines in recognition of his achievement. The chain was the brainchild of Miami defensive coordinator Manny Diaz, who has emphasized the importance of creating turnovers to his players all spring and fall camp.

“He told us this morning about the turnover chain,” Quarterman said. “It goes to whoever gets the turnover. You get to rock that huge Miami-style chain… it was just another incentive. We didn’t really need much, but that was definitely an incentive. Seeing Malek get it was amazing because we all wanted to know who was going to be the first guy to get it. Malek did his thing and he earned it, so congrats to him.”

A pair of Uriel Hernandez field goals bookended 24 consecutive points by Miami in the first half, as the Hurricanes entered the locker room with an 18-point lead, 24-6.

But the Hurricanes scored 10 more points to go up 28 points, their largest lead of the day.

With the Wildcats threatening to score late in the fourth quarter, freshman Amari Carter delivered a big hit on Bethune-Cookman’s Demetrius Weaver at the Hurricanes’ 30-yard line to force a fumble that was recovered by Miami’s Ryan Fines and secured the 28-point win for Miami.

“I thought they were an outstanding football team – very well-coached,” Richt said. “They did a lot of great things on both sides of the ball. If you look at their depth chart, they have a lot of redshirt seniors, fourth-year juniors, four-year seniors. I think they are going to win a lot of games and I thought they played very well. We are thankful for the victory and a lot of really good things happened.

With the victory on Saturday, Miami has won six straight games dating back to a 51-28 victory over Pitt on Nov. 5, 2016. It is the first time the Hurricanes have won six consecutive games since they won nine straight from Nov. 17 2012 through Oct. 26, 2013.

Miami is back in action next Saturday, traveling to Arkansas State for its first road trip of the 2017 season. Kickoff is set for 3:30 p.m., ET.