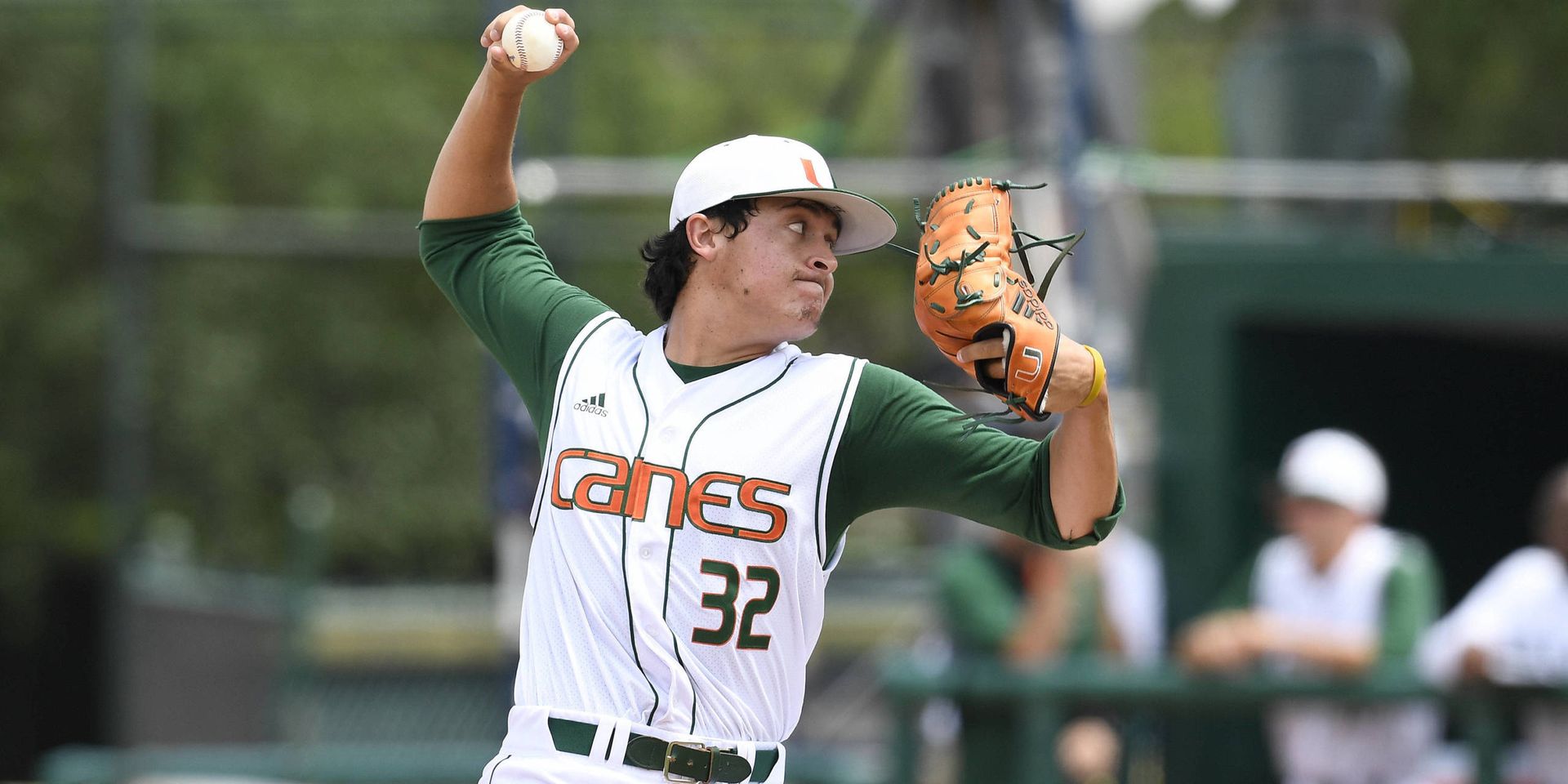 Offense Comes Up Short in 5-2 Loss to UCF

CORAL GABLES, Fla. – Freshman Evan McKendry overcame a difficult first inning to deliver a solid outing, but the Miami offense could not capitalize on its opportunities in a 5-2 setback to UCF Wednesday night at Mark Light Field.

McKendry (3-2), who allowed two runs in the first but just one over the remainder of his outing, set a career high with seven strikeouts across six innings.

The Hurricanes brought the game-tying run to the plate in the ninth inning, but UCF closer Bryce Tucker struck out freshman Nico Baldor to strand two runners and seal the win.

After the first three Knights batters of the game reached base, McKendry retired 11 of the next 12 he faced.

Miami (24-24) stranded a pair of runners in three of the first four innings and 12 total on a night where the visitors used five pitchers.

“It’s frustrating. We had a lot of guys on early and we were [2-for-14] with guys in scoring position,” head coach Jim Morris said. “We did a good job at the end battling to come back…it’s frustrating. There’s no question about it.”

Tucker allowed one walk and two hits, including an RBI double to junior Hunter Tackett, but finished off his ninth save with a strikeout of Baldor in front of 2,416 fans.

Following a single from Brennan Bozeman, McKendry struck out back-to-back batters and induced a groundout from Kam Gellinger to end the inning.

McKendry retired the side in the second and did not allow another hit until a two-out double by Bozeman in the third. But McKendry buckled down, striking out Rylan Thomas to strand a runner in scoring position.

Miami had its share of early scoring opportunities, loading the bases in the second on a single and two walks. But UCF starter Trent Thompson induced a comebacker from James Davison that jumpstarted a 1-2-3 double play to end the threat.

A fourth-inning solo homer from Kyle Marsh made it 3-0 in favor of the visitors.

The Hurricanes threatened again in the home half of the fourth, putting two runners in scoring position with no outs after a hit batter, walk and two wild pitches.

But Knights pitcher Thaddeus Ward (4-0) struck out the next two batters and induced a flyout from Davison, keeping the Hurricanes off the scoreboard.

“We have to come up clutch. We can’t strike out in situations where we need to put the ball in play and get those runners in,” junior Carl Chester said.

McKendry threw a career-high 108 pitches in the outing.

The Hurricanes finally cracked the scoreboard in the eighth when sophomore Romy Gonzalez and Tackett singled to open the inning.

Two batters later, Chester connected an RBI single through the left side off reliever Jason Bahr to cut the UCF lead to 3-1.

Bahr retired the next two batters in order to strand a pair and keep the Knights ahead heading into the final inning.

The Knights put the game away with two runs in the ninth off reliever Frankie Bartow to push their lead to 5-1.

Redshirt senior Christopher Barr reached base for the 20th straight game with his second-inning single.

Miami next travels to Charlottesville, Va., for a weekend series with host Virginia beginning Friday, May 12. First pitch for the series opener, slated for broadcast on ACC Network Extra and WVUM 90.5 FM, is set for 6 p.m.