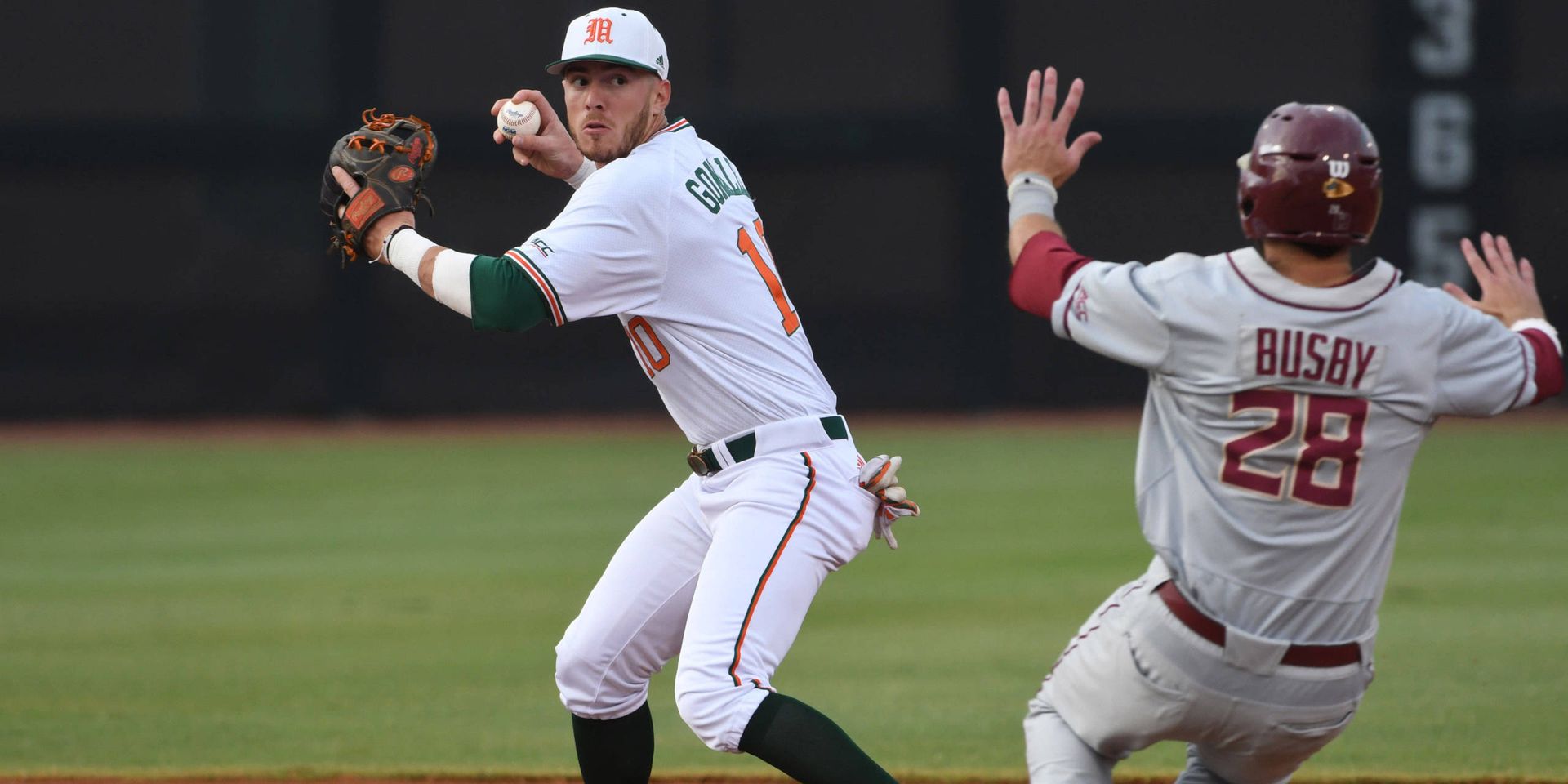 Making his first Friday night start after bumping up a day in the rotation, junior lefthander Jeb Bargfeldt cruised through the game’s early innings. But the Seminoles took the lead with a four-run fifth and held on to capture the opener in front of 3,523 fans.

“It was a tough loss for us. We had a couple opportunities there to win the game and didn’t get it done,” head coach Jim Morris said. “We left the bases loaded twice, and in close games, those things get you.”

Bargfeldt (4-3) surrendered a career-high five runs in 6.1 innings. He struck out three and walked one across 95 pitches, picking up a loss for the first time since March 25.

The Owasso, Okla., native needed just 52 pitches to get through the first four innings Friday. But the Seminoles (25-15, 10-9 ACC) forced him into 29 pitches in the fifth, tagging him for four runs to take a lead they would not relinquish.

“I felt good. They definitely put some balls in play pretty hard, but I have confidence in the defense behind me,” Bargfeldt said. “That’s when I get into a groove, when I feel like my defense is playing at a top level, which they always do.”

Following a home run-robbing catch by junior Carl Chester to lead off the second, sophomore Romy Gonzalez opened the scoring with his team-leading seventh home run of the year.

Gonzalez, who leads Miami in extra-base hits this season, belted a no-doubt blast off Florida State righthander Cole Sands over the fence in left to put Miami ahead 1-0 early.

Sands struggled with a high pitch count, departing after just 4.1 innings. Though he tied a career high with seven strikeouts, Sands allowed five hits and one walk before exiting 87 pitches deep into the outing.

Bargfeldt’s scoreless streak, which dated to his March 25 start at North Carolina, ended at 22 innings when Matt Henderson connected on a sacrifice fly in the fifth to tie the game 1-1.

“It’s part of the game. We’re always pulling for our guys, and we just didn’t things done today,” Gonzalez said.

The Seminoles took their first lead of the game at 4-1 on a two-out, three-run home run by Dylan Busby off Bargfeldt that snuck inside the foul pole in left.

“Just one pitch…wind blowing, he did a good job of keeping his hands back and put a good swing on it,” Bargfeldt said.

But with Miami (18-20, 9-10 ACC) threatening, Seminoles relievers Alec Byrd and Jim Voyles combined to skirt any further damage in the inning with a strikeout and a groundout.

Bargfeldt pitched a quick sixth inning and departed with one out in the seventh to a standing ovation.

The Seminoles added an insurance run in the inning on a sacrifice fly from Taylor Walls off reliever Albert Maury, Jr.

The Hurricanes scored a run in the eighth on a bases-loaded walk issued by Florida State reliever Drew Carlton, but Busby helped the visitors get the run back with an RBI double in the top of the ninth.

Voyles (3-0) tossed 3.0 innings of relief for the Seminoles to pick up the win.

“Right now we’re just focused on coming out tomorrow with the same attitude and the same intensity,” Bargfeldt said.

The two teams return to Alex Rodriguez Park at Mark Light Field Saturday for the second game of the three-game series. First pitch for the contest, slated for broadcast on ACC Network Extra and 560 WQAM, is set for 7 p.m.