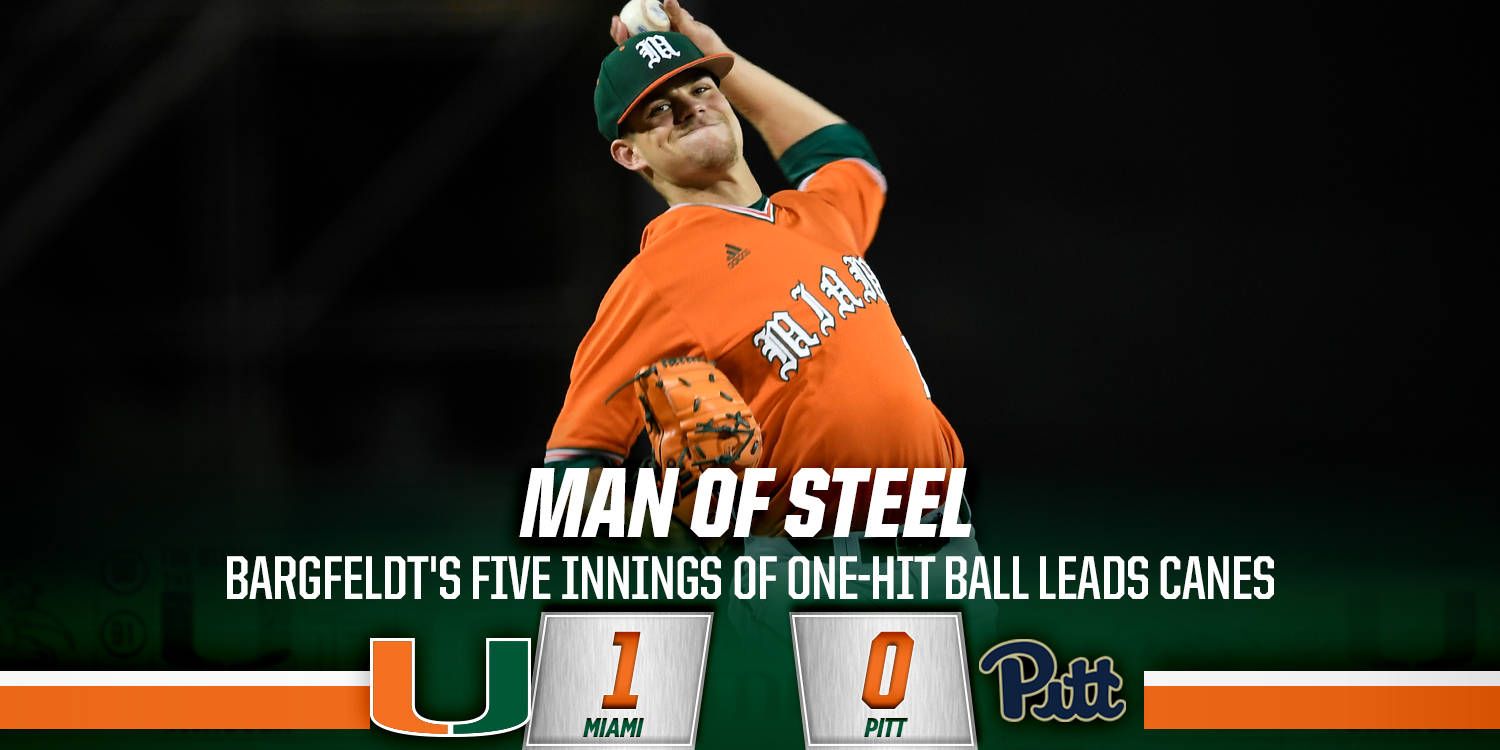 PITTSBURGH – Junior Jeb Bargfeldt continued his run of dominance on the mound, Miami’s bullpen shined, and the Hurricanes topped Pittsburgh, 1-0, Friday night to split a doubleheader.

Pitching on just four days’ rest – two short of the normal six days off – Bargfeldt delivered another gem in his first season as a Hurricane.

He allowed just one hit – a two-out bloop single to center in the fifth – and walked two batters with six strikeouts.

Miami got all the offense it needed on a solo home run from redshirt senior Edgar Michelangeli in the fifth. The Hurricanes out-hit the Panthers 4-2 in Miami’s third shutout of the season.

Closer Frankie Bartow pitched a scoreless ninth to cap four shutout innings by the bullpen and set up a rubber match Saturday at 2 p.m.

Bargfeldt (4-2) lowered his ERA in conference play to an eye-popping 1.19. For the third straight start spanning his last 17.0 innings, the southpaw held the opponent without a run. Over that stretch, the Owasso, Okla., native has 19 strikeouts compared to just five walks.

In nine starts as a member of the weekend rotation, Bargfeldt has a team-best 1.69 ERA.

Miami took a 1-0 lead in the fifth on the second home run of the season from Michelangeli.

With two outs in the frame, Michelangeli crushed a pitch from Pitt starter Dan Hammer well over the wall in left to put the visitors ahead.

Other than the mistake to Michelangeli, Hammer delivered 5.2 effective innings for the hosts. He scattered three hits and four walks with five strikeouts before being removed with the bases loaded in the sixth.

Bargfeldt didn’t allow a hit until a shallow single to center from Pitt’s Manny Pazos with two outs in the fifth. But he punctuated his impressive outing with a strikeout of Nico Popa, departing after 83 pitches on his sixth and final punchout.

Freshman Evan McKendry pitched a quick sixth but ran into trouble in the seventh when he walked the first two batters of the inning.

Sophomore Andrew Cabezas entered in relief and skirted any damage, inducing a sacrifice bunt and two groundouts to end the inning.

The two teams return to Cost Field Saturday for the series finale. First pitch for the contest, slated for broadcast on ACC Network Extra and WVUM 90.5 FM, is currently set for 3 p.m.