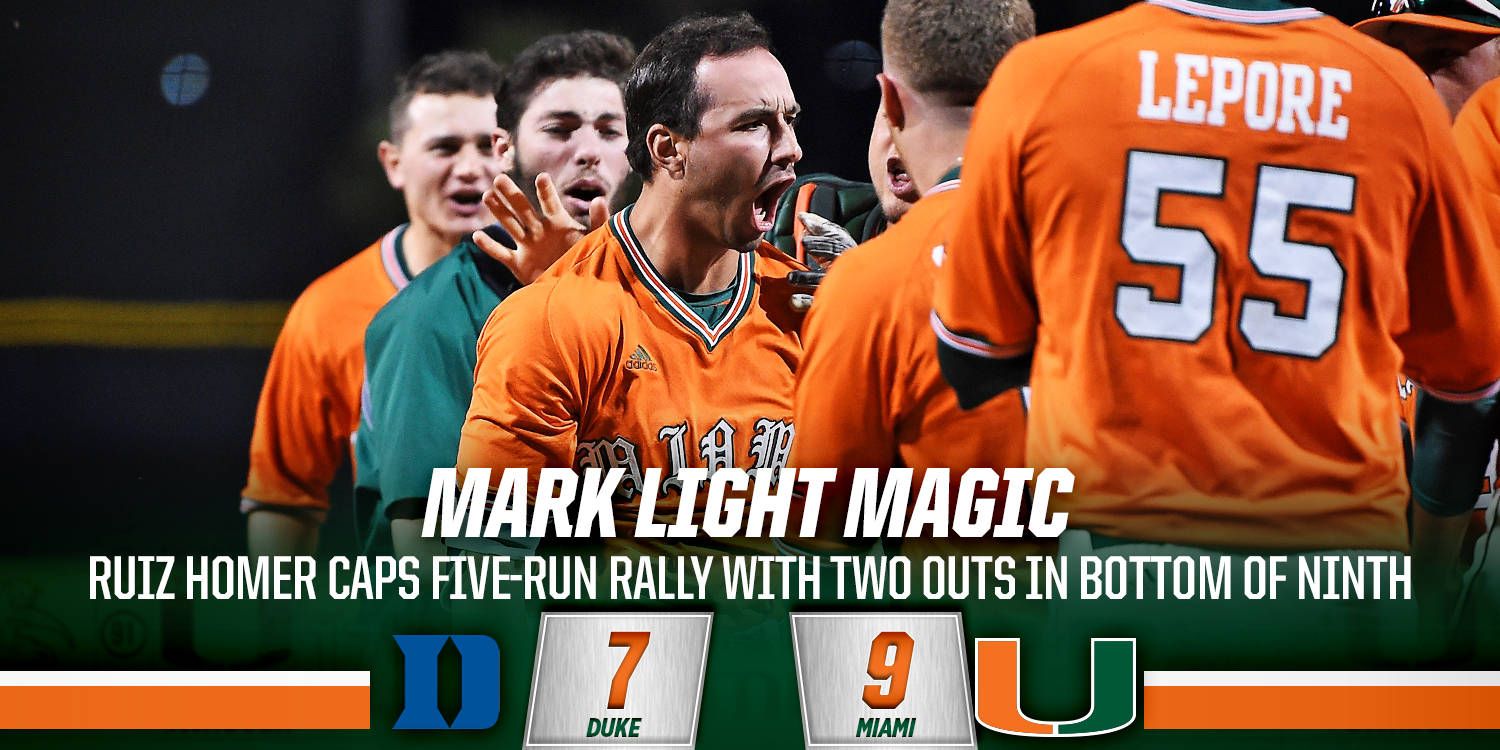 CORAL GABLES, Fla. – There was magic in the air Saturday night at Mark Light Field.

A three-run, walk-off home run by senior Johnny Ruiz capped a furious Miami rally over the game’s final three innings, as the Hurricanes topped Duke, 9-7, in a thrilling series opener.

Trailing 7-0 and with the scoreboard flashing just one hit through six innings, the Hurricanes (14-16, 6-7 ACC) plated four runs in the seventh and five more in the ninth to complete the improbable comeback.

No hit was bigger than the no-doubt blast from Ruiz, who crushed a full-count offering from Duke closer Jack Labosky well over the fence in right, sending the remainder of the 2,839 fans in attendance into jubilation.

The home run was the second of the season for the team captain, who entered as a pinch hitter and delivered his first career walk-off home run. Ruiz was appropriately mobbed by teammates at home plate, and gave a teary-eyed hug to his father after the enthusiastic celebration.

“It’s an awesome feeling,” an emotional Ruiz said afterwards. “I haven’t been playing well the last couple of weeks, so when coach [Morris] gave me the opportunity to get an at bat, I didn’t want to let my team down.

“I feel like a lot of guys look up to me. I wanted to be that guy to get the job done.”

Batting just .183 entering the game, Ruiz went down 0-2 in the count, battled back to 2-2 and took a close pitch for ball three before the homer.

“I was trying to give a good at bat,” Ruiz said. “Whether I got a hit or not, I was going to go out fighting…a lot of times when you go down 0-2, you battle back and get yourself in a better count. That’s what I was trying to do.”

The odds looked bleak for Miami, who had just a runner on first with two outs in the ninth.

But back-to-back walks from redshirt senior Christopher Barr and junior Alex Sanchez from Duke reliever James Ziemba loaded the bases for the Hurricanes and prompted a Duke pitching change.

Senior Randy Batista set the table for Ruiz with a two-RBI double off Labosky (1-2) down the left field line that plated Barr and junior Hunter Tackett, cutting the deficit to one at 7-6.

“We were down three runs in the last inning, and I believed we could do it,” Ruiz said. “I think everybody else did too. I have to give a lot of credit to Randy. That was a really big hit to even give me the opportunity to come up there. A lot of credit to him – that was a great, great, great at bat. He never gave up.

Junior righthander Jesse Lepore was tagged for four hits and six runs in just 3.2 innings. He struck out two batters and walked two before being relieved by freshman righthander Evan McKendry in the fourth.

Blue Devils rightfielder Griffin Conine connected on a two-run home run off Lepore open the scoring in the fourth. The visitors then took advantage of two miscues with the bases loaded – one coming on a hit batsman, the other a wild pitch – to push their lead to 4-0.

An RBI single by James Herron off McKendry capped the inning’s scoring.

Duke lefthander Mitch Stallings tossed six shutout innings before the Hurricanes cracked the scoreboard. The Hurricanes’ four-run seventh inning was key to the comeback with the big hit coming on a bases-clearing, two-out double by Barr.

Junior Carl Chester connected on a one-out double and scored when sophomore Romy Gonzalez reached via infield single and a throwing error from Duke shortstop Zack Kone got past first baseman Justin Bellinger.

Back-to-back singles from Michelangeli and Tackett then loaded the bases, and Barr roped a double down the right field line to clear the bases and cut the deficit to 7-4.

The three RBI tied a career high for Barr.

Ruiz said a conversation with fellow veteran Edgar Michelangeli about another local sports team has helped the team refocus on the second half after a 12-16 start through the first 28 games.

“Obviously we haven’t done as well as we would have liked to early on, but we have a sign with a number in the locker room that says how many games we have left and what we’re going to make out of these last games,” Ruiz said. “We’ve only played half of the season. Me and Edgar were talking the other day, the Miami HEAT started off 11-30 and they’re one game out of the playoffs…you can never give up. Never give up.”

Ruiz smiled when asked about the return of “Mark Light Magic,” and suggested the repositioning of a sign on the outfield wall dedicated to Ron Fraser might have made the difference.

“I guess [the magic] had been gone a little while, but hopefully it’s back and here to stay,” he said.  “If you guys noticed, they moved The Wizard to where he was…he wasn’t in the right spot for the first half of the season. Hopefully that’ll get us going.”

The two teams return to Alex Rodriguez Park at Mark Light Field Sunday for Game 2 of the series. First pitch for the contest, slated for broadcast on ACC Network Extra, 560 WQAM and WVUM 90.5 FM, is set for 2 p.m.