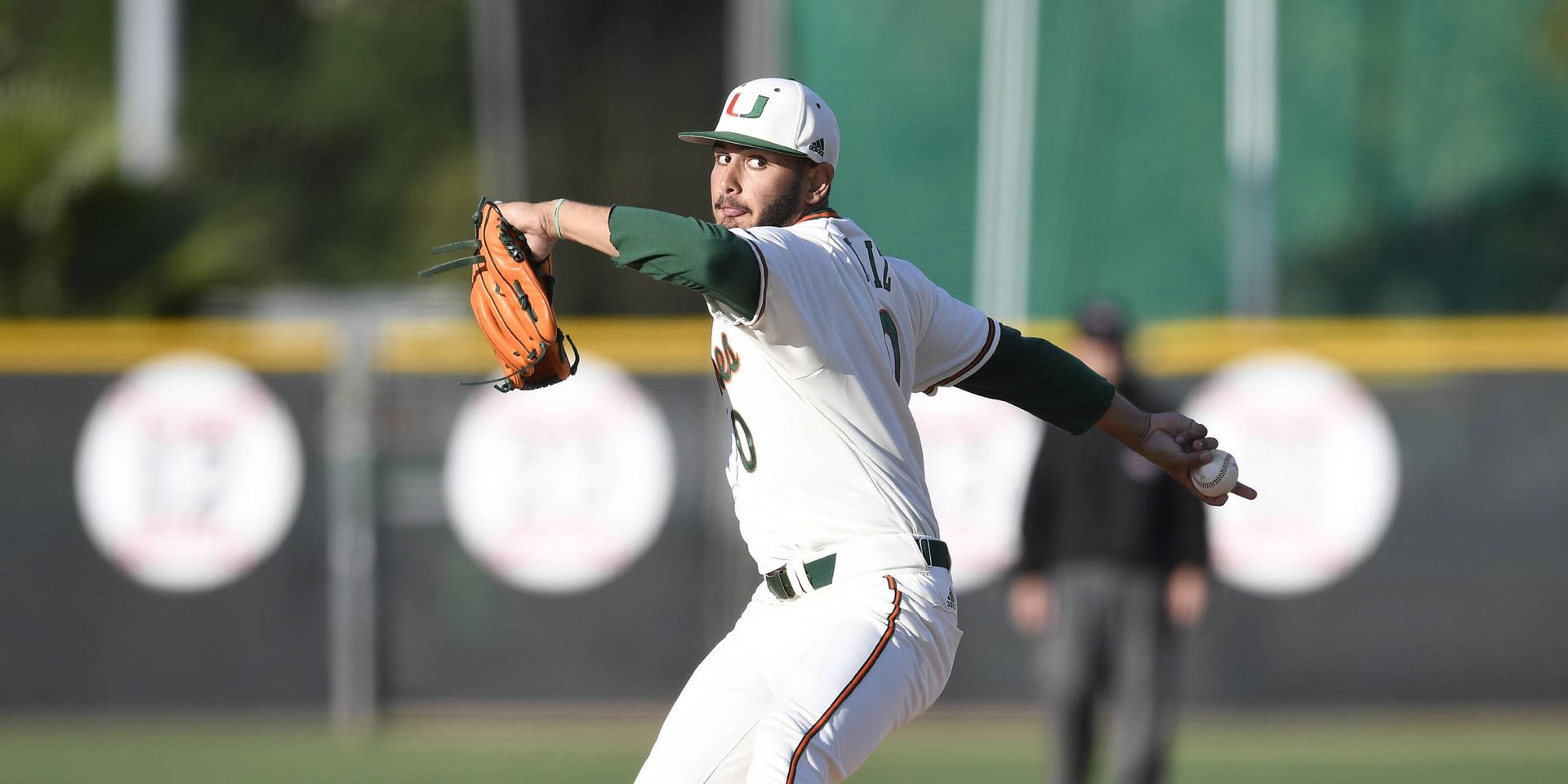 Miami Falls to No. 12 FGCU in Pitcher's Duel

FORT MYERS, Fla. – Freshman righthander Greg Veliz delivered a sparkling performance on the hill, but Miami faltered down the stretch in a 3-0 loss to No. 12 FGCU Wednesday night at Swanson Stadium.

Veliz allowed just one run on three hits in a career-long 6.1 innings. He struck out four batters and walked three in the fifth start of his collegiate career.

A three-run seventh for FGCU proved the difference Wednesday in front of a stadium-record sellout crowd of 2,074. The Eagles (23-3) tagged sophomore Andrew Cabezas for three hits and two runs in the decisive frame to surge to their ninth straight win.

After escaping a jam in the first inning where he struggled to locate his pitches, Veliz (2-2) shifted into cruise control from there. With one out and the bases loaded in the first, Veliz retired 10 batters in a row to keep the Hurricanes in contention in the early going.

A two-out single in the fourth by FGCU catcher Spencer Levine halted Veliz’ impressive run, but the Key West, Fla., native wouldn’t be deterred. Veliz struck out Marc Coffers to end that inning, beginning a streak of five more in a row set down before a one-out walk in the sixth.

Miami (11-14) nearly opened the scoring in the second when senior Joe Gomez walked, junior James Davison reached on an error, and both runners advanced a base on a passed ball charged to Levine.

But FGCU starter Mario Leon struck out senior Johnny Ruiz to strand a pair and maintain the deadlock.

After a 35-pitch first inning, Veliz needed just 66 to get through his next 5.1 innings. He allowed three batters to reach in the first inning and just three more for the rest of his outing before being relieved by Cabezas with one out in the seventh.

Unfortunately for Miami, Leon was up to the task.

Leon (3-1) struck out six batters and walked one before departing after 89 pitches.
The single extended Ruiz’ streak of reaching base safely to 19 straight games.

Veliz allowed a one-out single to Coffers in the seventh before the pitching change. The Eagles were unfazed by the decision, loading the bases on a single by Gage Morey and a walk from Matt Reardon.

FGCU’s Julio Gonzalez then connected on a two-out, two-RBI single to center to break the deadlock and put the Eagles ahead 2-0. An RBI double from Nick Rivera made it 3-0 in favor of the hosts.

The loss was Miami’s first to FGCU in a game played in Fort Myers; the Hurricanes entered the matchup 6-0 all-time against the Eagles on the road.

The Hurricanes open up an eight-game homestand Friday with their ACC series opener against visiting Wake Forest at Mark Light Field. First pitch for the contest, slated for broadcast on ACC Network Extra and WVUM 90.5 FM, is set for 7 p.m.