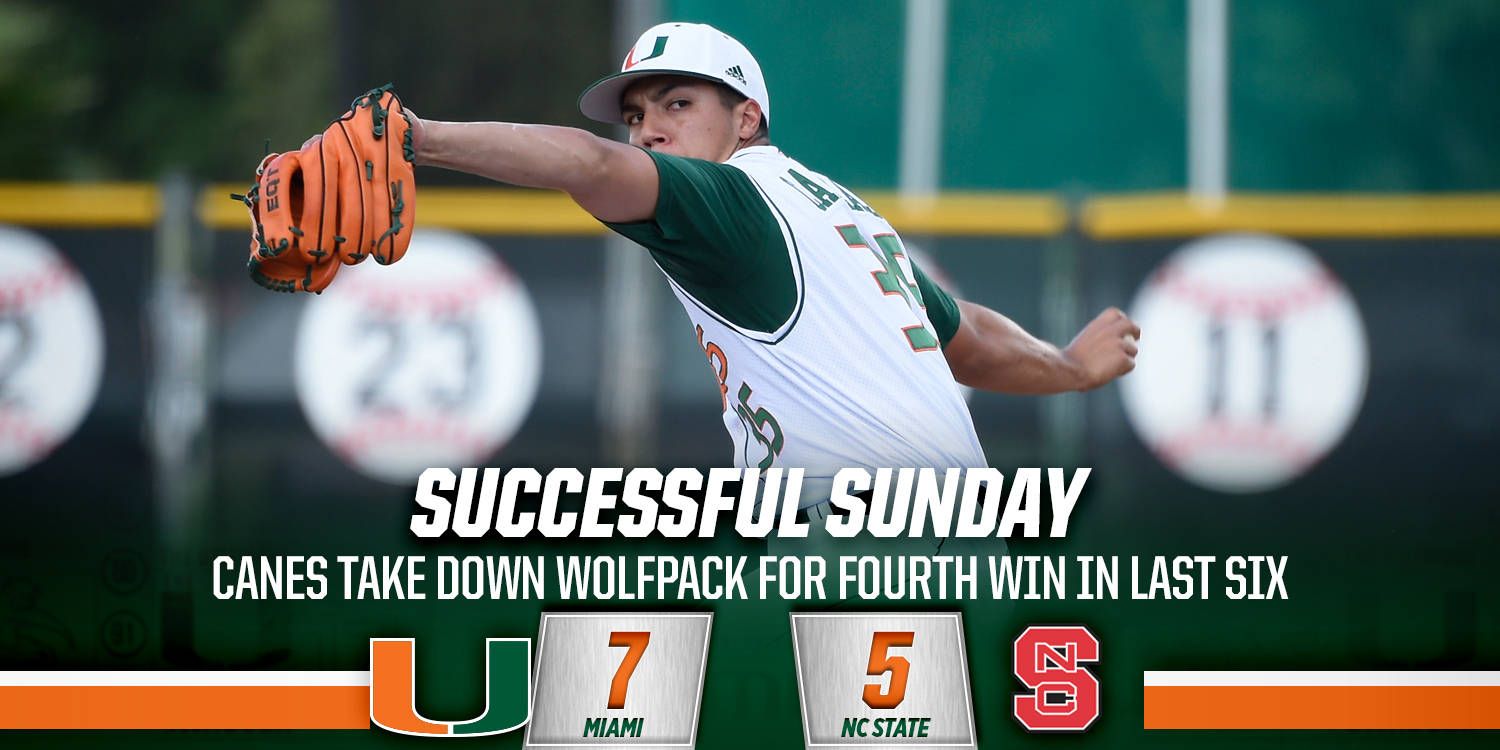 Canes Take Down Wolfpack, 7-5, in Finale

RALEIGH, N.C. – Miami scored all of its runs over the game’s first three innings and held on for a 7-5 win over NC State Sunday afternoon in the series finale at Doak Field.

The Wolfpack chipped away at the Hurricanes’ lead in the middle innings, but a strong showing from the bullpen, including the fifth save of the season from sophomore Frankie Bartow, clinched the win for the visitors in front of 2,987 fans.

On the hill in unfamiliarly low temperatures, Mediavilla said the early run support was crucial.

“I felt good. Starting off the game, it felt a little rusty, not having pitched in the cold like this in a while,” Mediavilla said. “It took me a little bit to get warm. I battled through it and my team helped me through it.”

Cabezas served as a bridge in relief, tossing three innings and allowing just one run before giving way to Bartow in the ninth. The sophomore struck out three batters and allowed just two hits.

“It was a huge win for us, particularly after losing the first two,” head coach Jim Morris said. “NC State has got a good club. We beat a good team on the road, and that makes it a huge win for us.”

Miami quickly erased the deficit by scoring seven runs over the next two innings to jump out to a 7-2 lead.

An RBI single from junior Brandon Gali halved the deficit to 2-1, and after back-to-back walks issued by NC State righthander Dalton Feeney loaded the bases, senior Joe Gomez delivered a two-RBI single to put Miami ahead 3-2.

Feeney allowed another RBI single – this one to junior James Davison – and walked senior Johnny Ruiz to load the bases once again, as the Hurricanes chased the freshman after just 1.1 innings.

Wolfpack reliever Evan Brabrand entered and retired junior Carl Chester on a groundout and sophomore Romy Gonzalez on a strikeout to hold Miami’s lead at 4-2.

Feeney (2-1) allowed four runs on three hits and three walks in his 35-pitch outing, as Miami handed him his first loss of the season.

The Hurricanes tacked on three more runs in the third. A single from junior Michael Burns, a hit batter and a walk loaded the bases, and a wild pitch from Wolfpack reliever Kent Klyman plated Burns from third.

An RBI groundout from Gomez deep in the hole at short padded Miami’s lead to 6-2, and a dropped fly ball in left scored Barr for a 7-2 lead.

The Wolfpack threatened to cut into Miami’s lead in the third when they loaded the bases on a walk, hit batsman and a single from Evan Mendoza.

But Mediavilla (2-3) retired Tommy DeJuneas on a fielder’s choice groundout to strand three runners and keep the Hurricanes ahead.

NC State scored a pair of unearned runs off Mediavilla in the fifth, aided by a throwing error in the frame.  The Wolfpack got another run back in the seventh on an RBI double from Will Wilson off Cabezas, cutting Miami’s lead to 7-5.

“It’s huge,” Morris said of the win that salvaged the series. “You come in here and get swept, and you’re leaving scratching your head, without any question. Mediavilla got the win and Cabezas was our player of the game.”

The Hurricanes return to Alex Rodriguez Park at Mark Light Field Wednesday for a midweek matchup with visiting FAU. First pitch for the contest, slated for broadcast on ACC Network Extra and WVUM 90.5 FM, is set for 6 p.m.