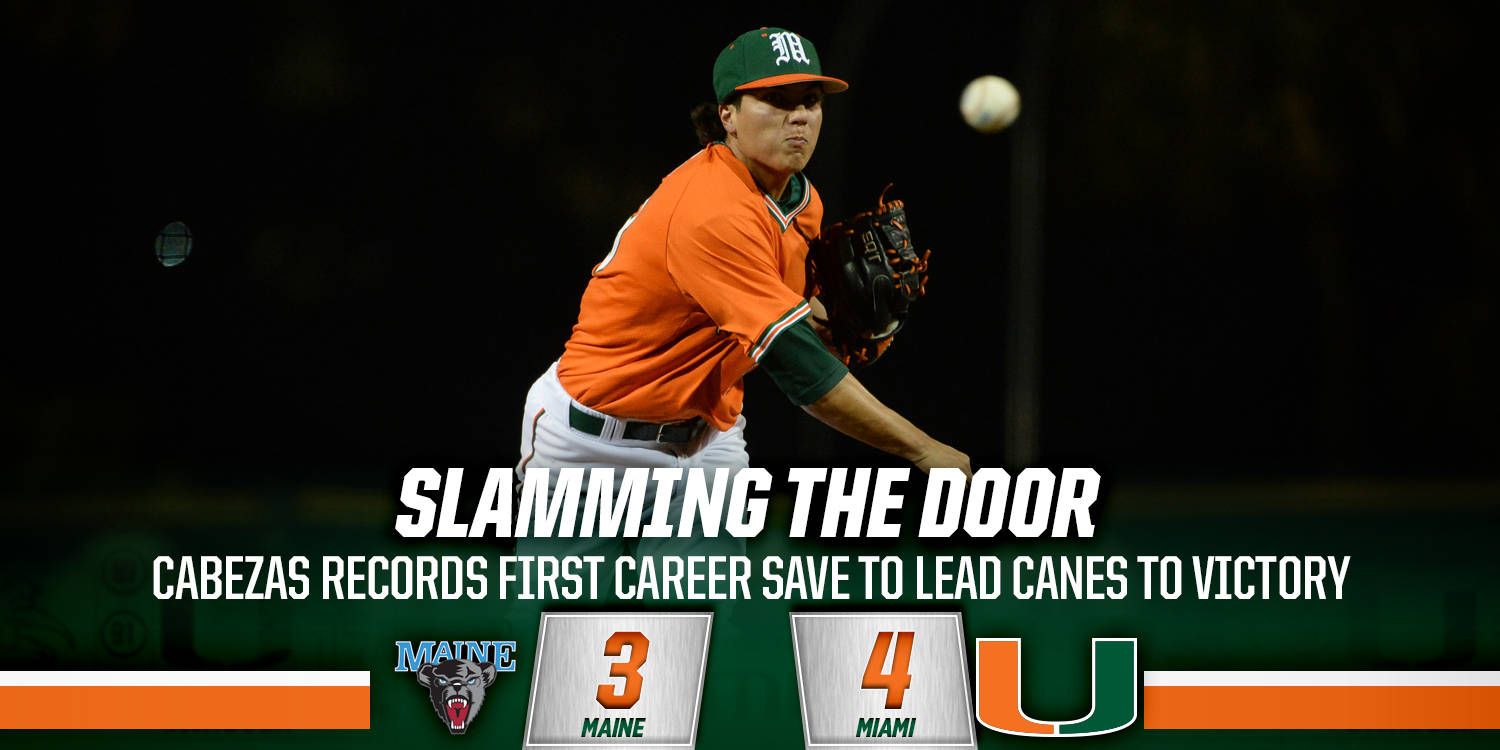 Sophomore Romy Gonzalez powered the offense with a two-run, three-RBI night at the plate that included his fourth home run of the season.

Freshman righthander Evan McKendry pitched seven innings in his first start at home to help Miami win for the third time in its past four games.

“I would have thought we would have scored more runs,” head coach Jim Morris said. “But we got the big home run from Romy, and he’s improved so much as a hitter.”

Cabezas entered in relief in the eighth inning after the first two batters singled off reliever Albert Maury, Jr. Poor execution by the Miami infield on a sacrifice bunt attempt resulted in a bases-loaded, no-out situation for the Black Bears, who were trailing by just a run late.

Cabezas would maintain his composure, retiring Brandon Vicens on a strikeout before Miami’s infield atoned on a suicide squeeze play by the visitors.

On a swing-and-miss from Jeremy Pena on a bunt attempt, catcher Joe Gomez fired to third baseman Edgar Michelangeli, who tagged out Christopher Bec after he prematurely took off for home, marking the second out.

Cabezas then got Pena on a flyout to right to maintain his team’s lead entering the final inning.

When asked if the eighth inning was nerve-wracking, Gonzalez answered “absolutely.”

“Bases loaded, no outs? It’s very nerve-wracking.” Gonzalez said with a smile. “But I have 100-percent confidence in [Andrew], and I know Coach [Morris] does and everyone else does.”

Cabezas pitched a scoreless ninth, needing just 14 pitches to retire the side, including a swinging strikeout of Miami native and dangerous Black Bears leadoff man Danny Casalas, to seal the first save of his career.

Cabezas helped McKendry (2-0) pick up his second win of the season in his first home start. McKendry tied a career mark with six strikeouts and tossed a career-long seven innings. He allowed five hits and scattered three runs (two earned) before departing after 99 pitches.

Miami won despite recording just three hits. Gonzalez finished 2-for-4, adding a double to the home run, for his team-leading seventh multi-RBI game of the year.

“We obviously didn’t hit like we did against Georgia Tech, but it was a great team win,” Gonzalez said. “McKendry really threw the ball well, and Cabezas was amazing out of the bullpen.”

The Hurricanes (7-9) plated a single run in the second inning and three more in the third to jump out to an early lead.

Gonzalez, who doubled to open the second, scored on a groundball from Hunter Tackett that split Black Bears first baseman’s Hernen Sardinas’ legs and rolled into right field.

Gonzalez was far from done. In the third, senior Johnny Ruiz singled to start a two-out rally, junior Carl Chester followed with a walk, and Gonzalez smashed the first pitch he saw from Maine starter Trevor Delaite (0-1) over the fence in right for an opposite-field, three-run home run.

“When [Romy] came here two years ago, he would not hit a ball out of the park to right field – I think he would agree with that,” Morris said. “He has really improved, to use the whole field. The ball really jumps off his bat.”

The home run was the fifth of Gonzalez’ career.

“It felt good,” Gonzalez said. “Home runs always feel good…we have a great coaching staff, and they’re really trying to simplify the game. I’m trusting the process and just staying with the coaches.”

McKendry allowed runs in the fourth and fifth, as Maine (6-9) began to claw back.

A sacrifice fly from Black Bears outfielder Brandon Vicens scored the visitors’ first run, and a solo home run to right an inning later by third baseman Danny Casals made it 4-2.

Maine cut deeper into the deficit when Casals singled in the seventh and Kevin Doody scored on the play. But Cabezas entered and shut down the door with two scoreless innings.

Chester reached base for the 12th straight game in the win, while Ruiz made it 10 straight games reaching base with a single in the third.

The Hurricanes and Black Bears return to Alex Rodriguez Park at Mark Light Field Wednesday for the second of a midweek pair. First pitch for the contest, slated for broadcast on ACC Network Extra and WVUM 90.5 FM, is set for 6 p.m.