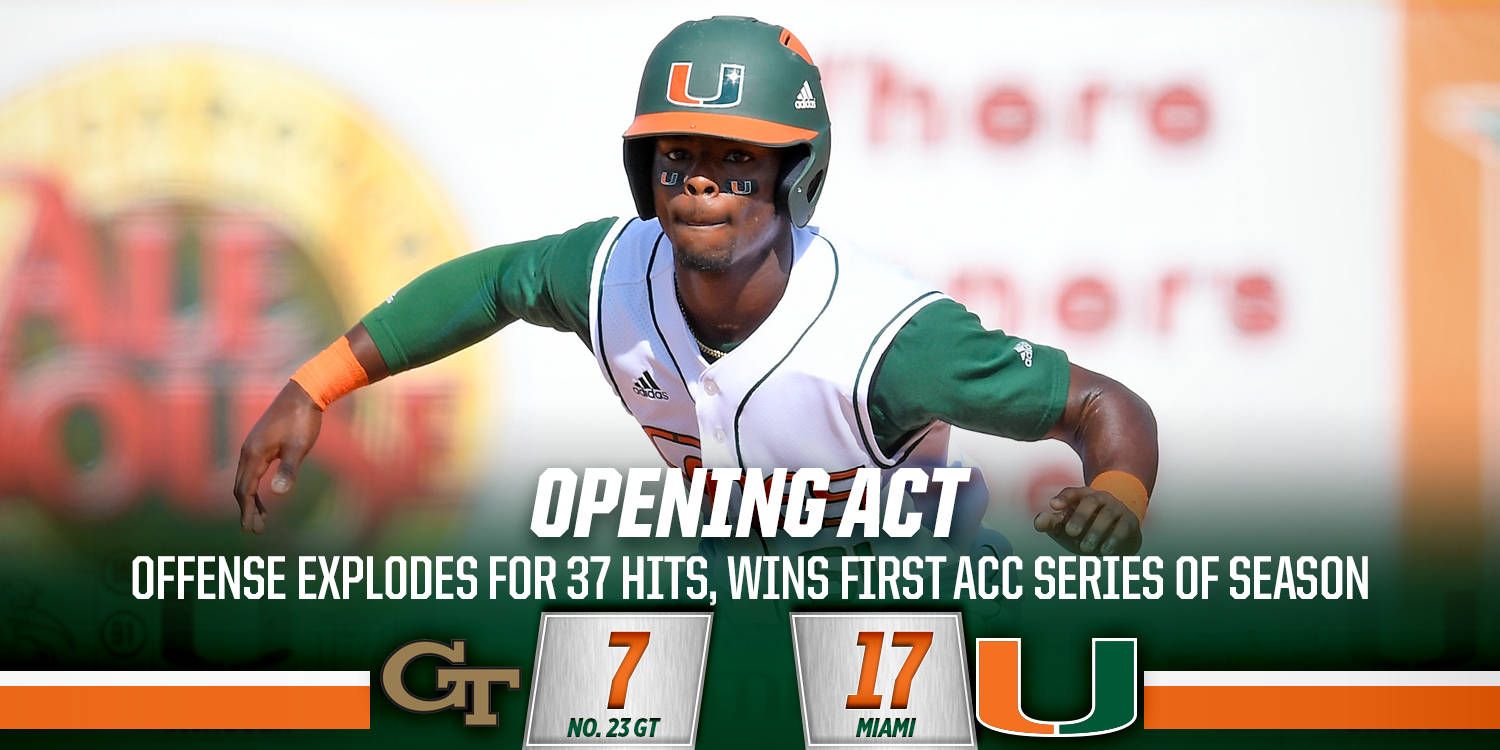 Junior lefthander Michael Mediavilla delivered his best start of the season, Miami pounded out a season-best 15 hits, and the Hurricanes (6-9, 2-1 ACC) captured their third straight series win over the Yellow Jackets in front of 2,957 fans.

Though they entered the weekend struggling at the plate, the Hurricanes recorded a double-digit hit total for the third straight game. Redshirt Edgar Michelangeli connected on his first home run of the season on a two-run shot in the third, and junior Michael Burns sealed the win with a grand slam in the seventh.

The Hurricanes totaled 37 hits across three games with the Yellow Jackets.

“First of all, the series win was a huge win for us, because we had been struggling coming into it,” head coach Jim Morris said. “We couldn’t score runs and couldn’t find ways to win. We didn’t seem to get any breaks.”

Junior James Davison had his first three-hit game (3-for-3) and reached base in all six plate appearances. Senior Johnny Ruiz (3-for-4, four runs), junior Carl Chester (2-for-5, two RBI, two runs) sophomore Romy Gonzalez (2-for-3, two runs, three walks) and Burns (2-for-5) all had multi-hit performances for the Hurricanes, who out-hit the Jackets 15-12 on the afternoon.

“Clearly we were hitting under .200 before this weekend,” Davison said. “But I knew from the work we put in every week, that the hits were going to come, as long as we kept playing at a team and having team at bats.”

Burns had a career-best seven RBI in the victory, Miami’s eighth in its last nine tries against Georgia Tech.

Mediavilla (1-3) struck out a career-best 11 batters over six innings to pick up his first win of the season.

“It feels good, everything was rolling for us,” Mediavilla said. “Coming into this weekend, we just kept the same approach, stayed positive. It was working out for us this weekend, and we came out on top. We won the series, and that’s always a positive.”

On a day when Miami coach Jim Morris needed him to be at his best with a depleted bullpen, Mediavilla scattered four runs and did not walk a batter in his longest start of the season.

“Mediavilla pitched an outstanding game,” Morris said. “[Georgia Tech] can really hit. They’re big, strong guys who can hit. He minimized the damage. When he got guys on base, he got them out.”

71 of Mediavilla’s 106 pitches went for strikes. The double-digit strikeout performance was the first by a Hurricane since Thomas Woodrey fanned 10 against Manhattan in March 2016.

“They’re a very aggressive team – just basically working backwards on them, off-speed and then setting them up with a fastball in,” Mediavilla said. “It worked out throughout the whole weekend. That’s what the whole mentality was.”

Miami tagged Jackets righthander for three runs in the first inning to take a lead it would not relinquish.

An RBI single from Ruiz scored Davison from third to tie the game 1-1, and a double from junior Carl Chester gave Miami two runners in scoring position with no outs.

Gonzalez came through with an RBI single to right to put Miami ahead, and Burns added on with a groundout that was mishandled by Georgia Tech shortstop Austin Wilhite to make it 3-1.

Another RBI single from Gonzalez in the second pushed Miami’s lead to 4-1, and a three-run third, including the long home run from Michelangeli, chased Lee after just 2.1 innings.

Lee was charged with seven earned runs. He allowed eight hits on 44 pitches before being relieved by Robert Winborne with one out in the third and his team trailing 7-1.

Three fourth-inning doubles by the Jackets’ potent lineup cut Miami’s lead to 7-3, but the Hurricanes retook a six-run lead with a pair of runs in the fifth on an RBI double from Ruiz and an RBI single from Burns.

Miami blew the game open in the seventh when Davison was hit by a pitch, Ruiz singled and Romy Gonzalez was intentionally walked to set up a forceout at any base. Burns made the Yellow Jackets pay, however, crushing a 2-2 pitch from reliever Micah Carpenter over the fence in left for his first career home run.

It was the first career grand slam at any level for Burns, he said afterwards.

“It was a good time for it to come, my first home run here,” Burns said. “It was a good feeling, just running around the bases and coming to the plate with all my teammates there. That’s a pretty cool thing, something I’ll never forget.”

The Yellow Jackets got two runs back on a two-run home run from Chase Murray off reliever Keven Pimentel in the eighth, but the hosts responded with four more runs in the home half. Chester connected on an RBI single, Burns drew a bases-loaded walk, senior Christopher Barr grounded into a double play to score a run, and Gonzalez scored on a wild pitch.

Ryan Guerra allowed one run in the ninth on a solo home run by Coleman Poje.

The Hurricanes will return to Alex Rodriguez Park at Mark Light Field for the first of two games against Maine on Tuesday, March 14. First pitch for the contest, slated for broadcast on ACC Network Extra and WVUM 90.5 FM, is set for 6 p.m.