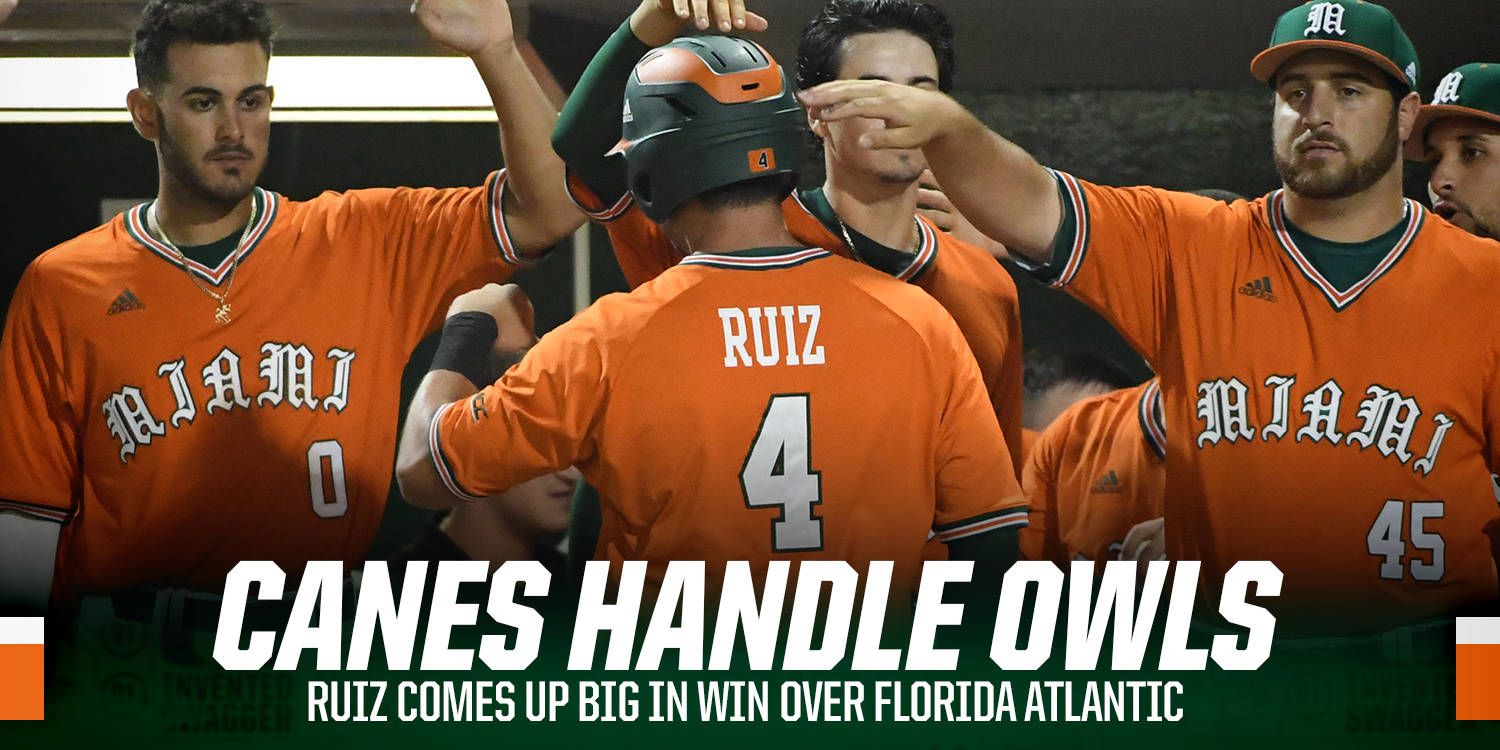 BOCA RATON, Fla. – No. 17 Miami used a four-run seventh inning to rally for a 5-2 win over FAU Wednesday night in a midweek matchup at FAU Baseball Stadium.

Freshman Evan McKendry (1-0) picked up the first win of his career, while sophomore closer Frankie Bartow recorded his second save of the season to snap a four-game losing streak.

“It’s big for us to get back on the winning side, trying to get a streak going, ” head coach Jim Morris said.

With his team trailing 2-1, junior Brandon Gali dropped a single in to shallow left off FAU’s Kyle Marman (0-1) to tie the game.

Miami kept the inning going after an FAU pitching change. With runners on the corners, junior James Davison dropped a beautiful drag bunt towards first to plate the go-ahead run on the first pitch he saw from FAU reliever Eric Keating. Another bunt – this one from junior Carl Chester – loaded the bases.

Senior Johnny Ruiz came through for the Hurricanes, connecting on a two-RBI single to deep left to push Miami’s advantage to 5-2.

“Not just for the game, but for the weekend coming up,” Chester said about the team’s offensive momenum in the seventh. “If you’re in a slump, getting that one bloop hit can really get you going.”

The Hurricanes (3-4) jumped out to an early lead when Chester cranked his first home run of the season over the left field fence in the third inning.

“I was looking fastball, like really every pitch until there’s two strikes,” Chester said. “He threw me a nice, juicy fastball that I put a good swing on.”

The homer was the eighth career long ball for Chester, who took a 1-1 pitch from FAU righthander Marc Stewart deep in front of 1,729 fans, many wearing orange and green in support of the visitors.

Making his mound debut, freshman Greg Veliz cruised through the first two innings, surrendering just one hit and one walk. The Key West, Fla., native ran into his first jam in the third, when he allowed two singles and a walk to load the bases.

But Veliz struck out FAU designated hitter Sean Labsan to end the inning and maintain his team’s 1-0 lead.

A scary moment happened in the fourth when Boca Raton Community graduate Michael Amditis beat out an infield single but lost his footing and was tagged out in the dirt. After trainers spent several minutes attending to Amditis, the freshman catcher was carted off the field and replaced by senior Joe Gomez behind the plate.

Veliz struck out five batters in his mound debut. He scattered five hits and two walks across 79 pitches.

A sticky situation for Maury got stickier when FAU freshman Eric Rivera reached on a bunt to load the bases with no outs. Maury fielded the bunt up the third base line, but his throw to third in an effort to get the lead runner was late.

Maury got slugger Esteban Puerta for the first out without allowing a run, but a bases-loaded walk issued to Stephen Kerr tied the game 1-1.

Miami nearly turned an impressive double play to end the inning and keep the game tied, but an RBI groundout by Labsan – who beat the return throw to first – gave FAU its first lead at 2-1.

Veliz was charged with two runs in 4.0+ innings.

Entering in the sixth, McKendry allowed a single and a walk but avoided any damage by getting back-to-back flyouts from FAU’s two- and three-hole hitters to strand a pair.

Davison reached base for the fifth straight game, while Chester recorded his second multi-hit game of the season (2-for-3).

The Hurricanes return to Alex Rodriguez Park at Mark Light Field Friday for their series opener against Dartmouth. First pitch for Game 1, slated for broadcast on ACC Network Extra and WVUM 90.5 FM, is set for 7 p.m.