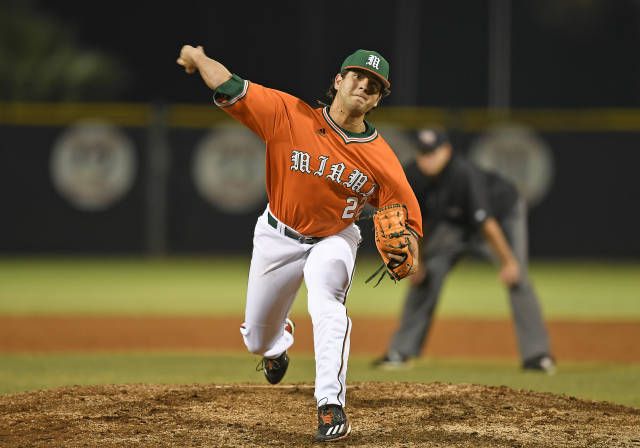 No. 17 Miami Drops Pitcher's Duel to No. 2 Florida

GAINESVILLE, Fla. – No. 17 Miami came out on the wrong end of a pitcher’s duel Friday night at Alfred McKethan Stadium, falling to No. 2 Florida 1-0 in the rivalry series opener.

The Hurricanes (2-2) had the tying run on second with two outs in the ninth, but Gators reliever Frank Rubio struck out Romy Gonzalez with two runners aboard to close out the game.

Facing a talented Gators lineup, junior Jesse Lepore delivered an impressive outing in the second weekend start of his career.

The righthander tossed six strong innings, allowing just one run on six hits and two walks. He struck out six before departing after 94 pitches.

Unfortunately for the Hurricanes offense, Gators righthander Alex Faedo was up to the task.

Faedo (1-0) allowed just two hits and one walk in a 119-pitch otuing. He struck out eight and departed with two outs in the ninth in front of 5,385 fans.

“It was a great pitching duel,” head coach Jim Morris said. “Both guys threw well, but Faedo threw better. We had a chance in the ninth to tie it up or win it, but Faedo pitched outstanding.”

Miami strung together a two-out rally in the final inning, as junior Michael Burns reached on an error and senior Johnny Ruiz battled his way on with a walk from Faedo, prompting a pitching change.

But Rubio struck out Gonzalez to finish off the opener.

Miami’s first hit off Faedo came in the fifth when senior Edgar Michelangeli lined a 1-0 pitch to right for a one-out double. A leadoff infield single from Burns in the seventh inning was just Miami’s second hit of the game.

“He was pitching really well,” Michelangeli said. “He pitched well throughout the whole game. I got a pitch I could drive, and I drove it into right field.”

It was the Gators (4-1) who struck first Friday night, as the hosts jumped out to a 1-0 lead on an RBI single from sophomore Jonathan India in the third inning.

With two runners in scoring position and one out, Lepore struck out cleanup hitter JJ Schwarz and induced a looping flyout to right from Gators’ second baseman Deacon Liput to limit the scoring to just one run.

“I felt great,” Lepore said. “Trying to make the pitches in that one inning, and it kind of got away from me. You live and learn from it. You just have to battle through it.”

Lepore did well to avoid any damage in the second inning when Liput opened with a triple over the outstretched glove of Carl Chester in center.

Lepore handled a comebacker cleanly for the first out. A heads-up play by Michelangeli, who fielded a slow roller from Mike Rivera and fired home to get Liput on a tag by freshman Michael Amditis, resulted in the second out.

The play was challenged by Florida Gators’ head coach Kevin O’Sullivan and was upheld after a video review.

Lepore then struck out Christian Hicks to end the inning and keep the game scoreless early.

In his final inning of work, Lepore quickly got the first two outs but hit a batter and allowed a single to give Florida a scoring opportunity. After a conference on the mound with pitching coach JD Arteaga, Lepore induced an inning-ending groundout from Blake Reese on the final pitch of his outing.

“All in all, it’s a team thing,” Lepore said. “We have to play better as a team. It’s a good guy who threw for them, Faedo – but we need to find a way in tough times. We’re going to be facing those tough pitchers.”

The two teams return to McKethan Stadium for Game Two of the series Saturday night. First pitch for the contest, slated for broadcast on SEC Network +, is set for 6:30 p.m.