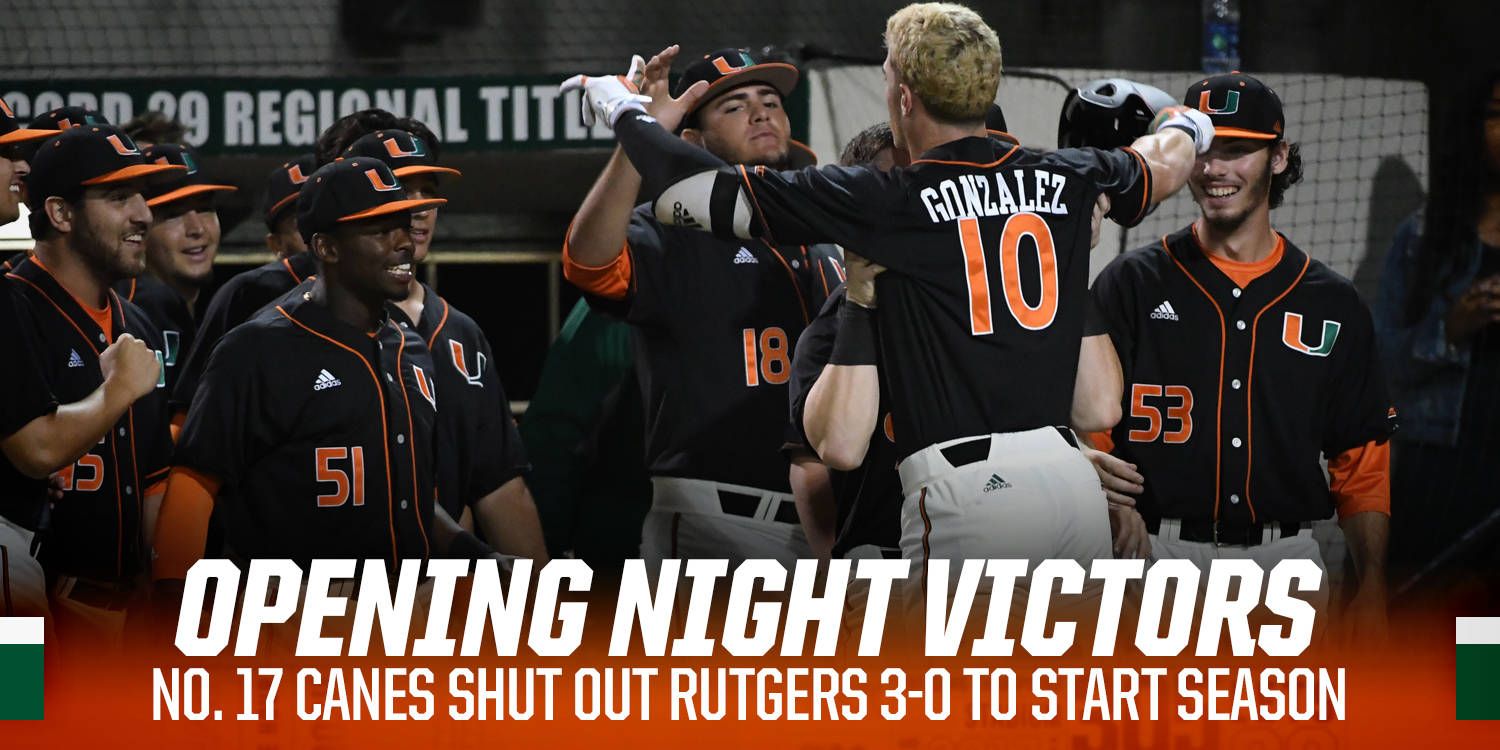 Lepore Leads No. 17 Miami Past Rutgers

CORAL GABLES, Fla. – Junior righthander Jesse Lepore shined in the first weekend start of his career and No. 17 Miami got all the offense it needed from sophomore Romy Gonzalez in a 3-0 win over Rutgers Friday night at Mark Light Field.

From there, Miami’s sophomore righthanded relief duo of Andrew Cabezas and Frankie Bartow pitched the three final innings, with Bartow earning the first save of his career in a scoreless ninth.

“Every win is big, but the opening game is special,” head coach Jim Morris said. “I thought we played a complete game. It was a very good team win, starting with pitching and defense.”

The Hurricanes (1-0) made no errors in the field compared to three made by Rutgers. The two teams combined for just seven hits on a night when offense was hard to come by.

“As Coach Morris always says, pitching and defense is the backbone of this team,” Lepore said. “We hope to prove that each and every game.”

The big righthander did not show any nerves after being named the Opening Day starter earlier in the week by Morris.

“From the beginning I thought I was locked in,” Lepore said. “I did the common routine and everything. I felt pretty comfortable.”

The Beverly Hills, Fla., native retired nine in a row to end his outing in front of 3,155 happy fans on Opening Day.

Rutgers’ righthander John O’Reilly was largely up to the challenge set by Lepore, save for a two-run home from Gonzalez in the second inning.

After a leadoff walk from senior Edgar Michelangeli, Gonzalez blasted the third pitch he saw from O’Reilly deep over the left field fence to give the Hurricanes a 2-0 lead.

“I thought I had a good game today – 2-for-4 isn’t bad,” Gonzalez said. “It was a great team win. There’s nothing better than starting the opening night with a ‘W.’”

Gonzalez said he wasn’t fazed by any concerns about a lack of team power after the loss of sluggers Zack Collins and Willie Abreu to the MLB Draft last spring.

“I think we’ll hit a couple home runs, but we lost a lot of guys like Willie and Zack– those guys are pretty hard to replace,” Gonzalez said. “We just have to execute the small ball game like we always do, which is a major part of the game. I think we’ll be alright.”

Lepore was relieved by Cabezas in the seventh, who immediately walked the leadoff batter and found himself in a jam when Jawuan Harris took third on a steal and wild pitch.

Cabezas worked himself out of it, however, getting a foulout, strikeout and groundout to escape any damage.

He tossed a scoreless eighth inning, punctuated by a strikeout of pinch hitter Christian Campbell to end the inning.

“Our pitching pitched outstanding,” Morris said. “Our bullpen was really good. I’m very pleased with that.”

O’Reilly (0-1) came out for the seventh and got the first two outs before surrendering a double to junior Brandon Gali. He struck out Carl Chester to end the threat.

“I think it’s a nice little push. It’s a good way to get comfortable with the game – all these bits and pieces are coming together,” Lepore said. “It’s going to continue throughout the season. I feel like it was a good team, and that boosted our confidence going further into the schedule.”

Miami returns to Mark Light Field Saturday for Game 2 of its series with Rutgers. First pitch for the contest, slated for broadcast on ACC Network Extra and WVUM 90.5 FM, is slated for 7 p.m.