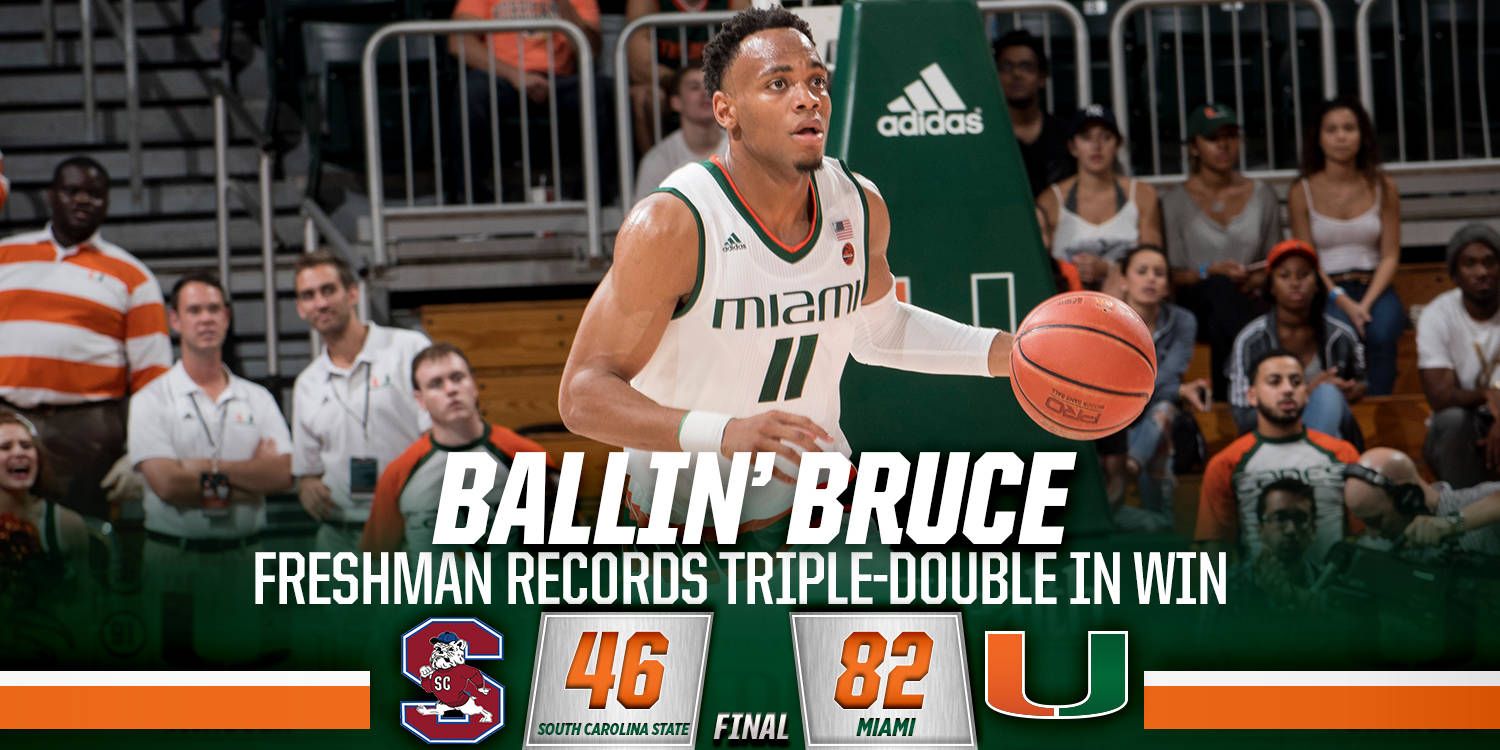 Days after being named ACC Freshman of the Week, Brown finished with a triple-double to lead Miami to an 82-46 win over South Carolina State Tuesday night. The triple double was Miami’s first since 2004 and second overall.

Brown scored 11 points and finished with 11 rebounds and 10 assists for the Hurricanes. The performance capped an emotional day for the guard, whose uncle, Edward Dillard, died earlier Tuesday.

“The game was for him,” Brown said. “I played every possession like if it was my last.”

Brown had nine rebounds in the first half and reached double figures 7:42 into the second half. But Brown didn’t reach double digit scoring until his dunk with 4:34 remaining. His final assist resulted in D.J. Vasiljevic’s 3-pointer with 2:59 left that gave Miami its largest lead at 81-42.

Midway through the second half, Brown pleaded for additional playing time with Miami coach Jim Larranaga in his attempts to reach the coveted mark.

“I went to coach L, please don’t take me out until I get three more assists and one more point,” Brown said.

“I think the greatest thing about Bruce is his personality, his enthusiasm, his smile and energy that he brings to practice every day and he brings to the court every game,” Larranaga said. “He’s such a hard worker.”

The Hurricanes (7-2) opened the game with an 18-0 run in the first 6:15. Davon Reed and Ja’Quan Newton scored four points each during Miami’s early surge.

The Bulldogs (2-6) missed their first 10 shots until Tashombe Riley’s jumper broke the scoring drought with 13:27 remaining in the first half.

“It speaks to the level of their athleticism and guys finishing plays,” Bulldogs coach Murray Garvin. “I don’t think we gave a lot of resistance.”

Vasiljevic scored a team-high 17 points for the Hurricanes. All of the Vasiljevic’s field goals were 3-pointers as he shot 5-of-11 from behind the arc.

Reed and Newton were Miami’s other double figure scorers with 15 and 11 points, respectively. Reed shot 6-of-8 from the field.

Anthony Lawrence’s 3-pointer at the buzzer gave the Hurricanes a 42-14 lead at halftime.

A day after being recognized as the Atlantic Coast Conference Freshman of the Week, Bruce Brown recorded only the second triple-double in Miami Hurricanes history and first ever by a freshman. Setting a career-high in both rebounds (11) and assists (10), Brown also recorded 11 points.

Hitting a career-high five shots from deep, freshman guard DJ Vasiljevic finished the game with both a game-and-career high 17 points.

Senior guard Davon Reed scored 15 points, shooting an efficient 75.0 percent (6-8) from the field and 60.0 percent (3-5) from long range, while pulling down six boards and dishing out six assists. Reed has scored in double digits seven times and grabbed five-plus rebounds in six outings this season. He has hit at least one shot from long range in every game, with multiple threes in five contests.

The Hurricanes dished out a season-high 24 assists on 31 made field goals and outrebounded the Bulldogs 45 to 31.

The Philadelphia native Junior Ja’Quan Newton finished the afternoon with five assists and 11 points, continuing his streak of scoring 11+ points in every game this year. In the first half, he shot a perfect 3-3 from the field, the free-throw line (2-2) and from beyond the arc (1-1).

The Hurricanes opened the game scoring 18 consecutive points and taking their largest lead of the half, 28 points, 34-6. The Bulldogs missed their opening 10 shots before Tashombe Riley hit a 2-point jumper at the 13:27 minute mark. Miami held SC State to only 14 first half points, the lowest point total allowed in a half since it held Maryland to 14 first half points on January 13, 2013.