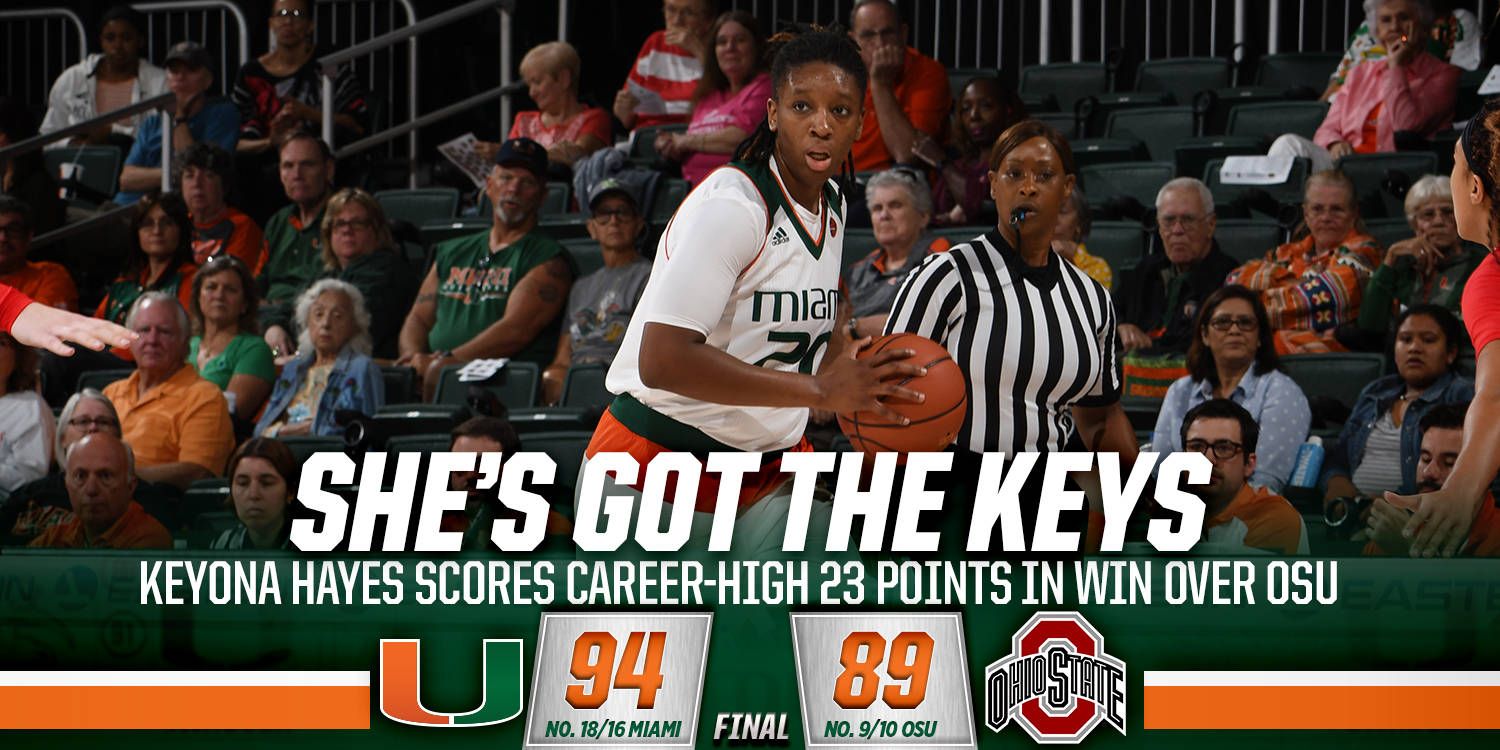 COLUMBUS, Ohio – Top-10 road wins are as rare as they are important.

In its first opportunity to post such a victory this season, the University of Miami women’s basketball team did just that, earning a scintillating 94-89 overtime triumph at No. 9/10 Ohio State Thursday night at Value City Arena.

Led by a career-high 23 points from redshirt senior forward Keyona Hayes and the first-career double-double by junior forward/center Erykah Davenport, No. 18/16 Miami (6-1) recorded its third straight triumph in the ACC/Big Ten Challenge.

“I specifically told them before the game, I didn’t want them to get overhyped, but if you want to be a legit team, you have to get top-10 road wins,” Miami head coach Katie Meier said. “I thought it was a good opportunity for us.  They had come off a tough tournament where they played some big-time opponents. I just thought we had good confidence and good rhythm. We were prepared, frankly, to win this game. We showed that in the first half. Then, when it got away from us, it was another thing we had to learn about our team [and we had] a heck of a response.”

Miami took an early 13-8 edge, the first of three times it would lead Ohio State (5-3) by five points in the opening period. The Buckeyes responded with a 10-0 run to close the frame and held a 22-17 advantage through 10 minutes of play.

The Hurricanes began the second period on a 16-2 run, including scoring 11 consecutive points in a span of one minute and 33 seconds to go in front, 33-24, with 3:50 on the clock before the break. Miami held Ohio State without a field goal for the first six minutes and 22 seconds of the period.

Miami outscored the Buckeyes by 16 points, 24-8, in the second period to take an 11-point lead, 41-30, in the intermission. Seven Hurricanes scored at least four points in the first half, led by nine from senior guard Nigia Greene.

Meanwhile, the Hurricanes limited Ohio State junior guard Kelsey Mitchell, the Big Ten Preseason Player of the Year, to 2-of-11 shooting in the opening 20 minutes. As a team, Ohio State shot 10-of-31 (32.3 percent) in the first half, including 1-of-13 (7.7 percent) from 3-point range.

The Buckeyes used a 13-2 run in the third period, during which they scored 10 points in a row, to go in front by two, 59-57. However, redshirt senior forward Keyona Hayes scored the final points of the session on a three-point play to give the lead back to the Hurricanes, 60-59, through three periods.

After a back-and-forth final frame, senior guard Adrienne Motley hit a pair of free throws to put Miami ahead by three, 84-81, with 2.3 seconds left. However, Ohio State redshirt sophomore guard Sierra Calhoun hit a 3-pointer at the buzzer to send the game to overtime.

“The thing is, the score was wrong. We didn’t lose,” Meier said of the scoreboard error showing Ohio State had won the game. “I’m going crazy, and I thought, ‘It’s just overtime.’ It’s tough, but I said, ‘We didn’t lose, y’all.’ They said, ‘We didn’t?’ I said, ‘No, the score is wrong. We made two free throws.’ It wasn’t deflating at all . . . we knew the worst thing that was going to happen was that they would tie it and we would go to overtime, and they did. It wasn’t all that deflating.”

Hayes, who shot 9-of-14 from the field and pulled down six rebounds, scored 17 of her points after halftime to help propel the Hurricanes to the win.

“We moved her around between different positions on the floor, so she had different matchups. A lot of times, when they were coming out of their presses and stuff, she was able to get mismatched on a guard,” Meier said. “That’s when we first started going to her. Then, it was just that she was so confident and so effective that, no matter, who was guarding her, we just kept going to her. We just kept feeding her.”

Davenport shot 5-of-7 from the floor and finished with 10 points and a season-high 10 rebounds, her third-career double-digit rebound performance. Senior guard Jessica Thomas logged 16 points, her seventh consecutive double-digit scoring game to open the season, and a season-high-tying five assists in a career-high 42 minutes.

Mitchell led all scorers with 29 points, finishing 9-of-21 from the field. Senior forward Shayla Cooper added 17 points and 11 rebounds and junior forward Alexa Hart logged 11 points for the Buckeyes, whose previous two losses both came against top-five opponents.

Needing to make free throws down the stretch of both regulation and overtime, Miami concluded the game 25-of-32 (78.1 percent) from the line.

The Hurricanes are now 2-1 in their last three games against top-10 opponents, as Miami knocked off No. 14/10 Florida State, 74-56, on March 4, 2016 in the ACC Tournament quarterfinals. Miami is now one of just seven teams in the nation with a top-10 victory, including one of just three with a top-10 road win, joining Maryland and South Carolina.

Miami will now return to Coral Gables, Fla., where it hosts Old Dominion at the Watsco Center Sunday at 2 p.m.

·         Junior forward Keyanna Harris connected on two 3-pointers in a game for the first time as a Hurricane, matching her total for made threes in the first two years of her career as a whole.