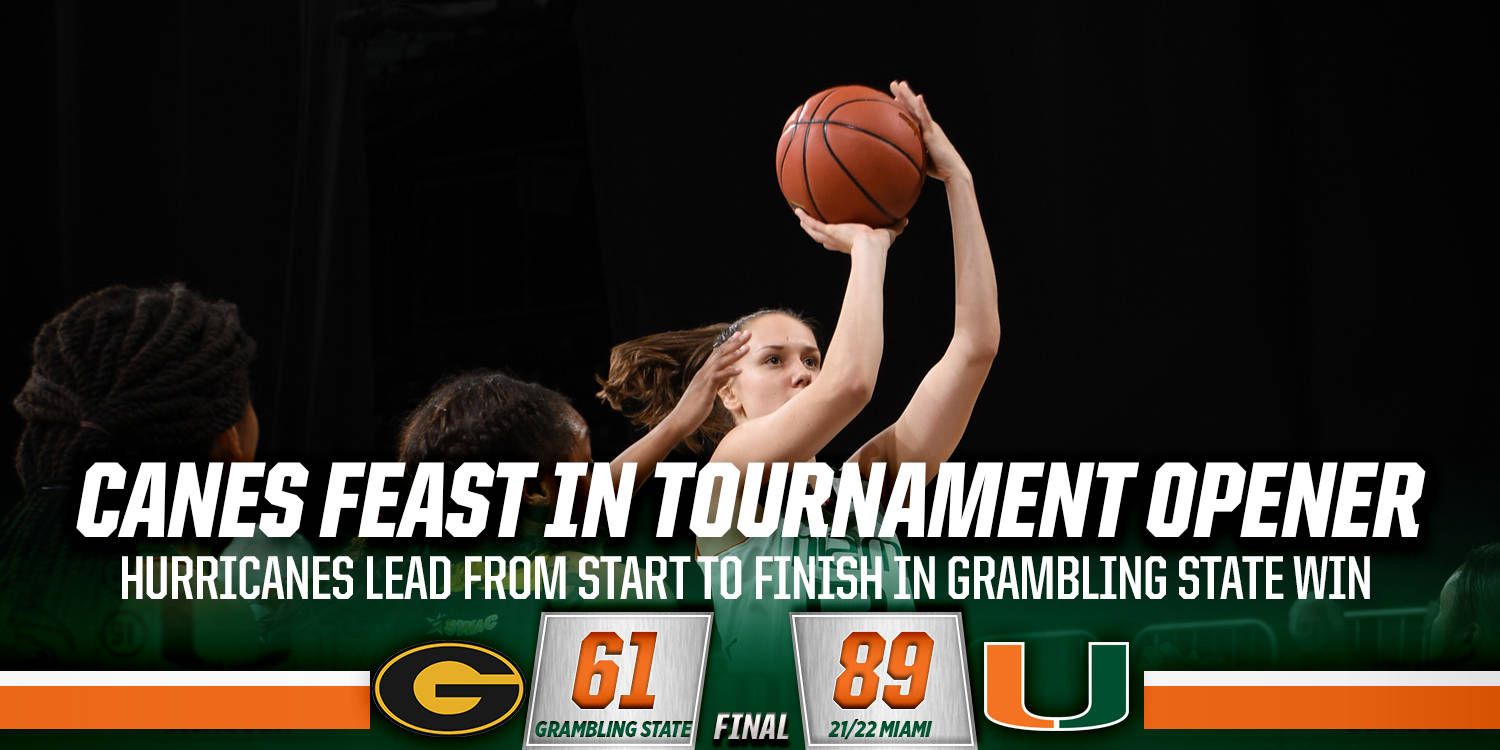 CORAL GABLES, Fla. – The University of Miami women’s basketball team began the Miami Thanksgiving Tournament with an 89-61 triumph over Grambling State Friday at the Watsco Center.

“We were trying to establish inside. It was a matter of a good, better, best philosophy,” Miami head coach Katie Meier said. “We could get a good shot early, we could get a better shot five minutes later and we could get the best shot towards the end of the shot clock. It was just a matter of being mature and disciplined. So, our shooting percentages were great.”

The first shot of the game was a made jumper by senior guard Adrienne Motley, giving her 1,463 points in her career to pass Kym Hope for No. 10 all-time at Miami. Motley would finish with seven points in the first period, which was capped by a buzzer-beating 3-pointer by Thomas to give the Hurricanes a 22-14 edge through 10 minutes.

“She has been a consistent player for us. She has logged so many minutes and she had a lot of responsibilities throughout her entire career,” Meier said of Motley. “She didn’t get a chance to settle in. As a freshman, we put a lot on her plate and she responded well and always answered the bell for us. I know she is getting herself to where she is about to explode. I am really proud of her. She had been a joy to coach.

Sophomore forward/center Zada Williams scored six consecutive points—one shy of her career best for a full game—in a span of 61 seconds during the second period to conclude a 10-0 Miami run and put the Hurricanes up by 25, 45-20. Miami would go on to take a 45-24 lead into the locker room at halftime.

The Hurricanes opened the third quarter on a 16-2 run, including scoring each of the first 13 points after the break, to push their lead to 35 points, 51-26. Grambling State (1-4) connected on its final four shots of the period and trimmed Miami’s advantage to 66-38 entering the final session.

The Lady Tigers would not get any closer than 24 in the fourth period and when they did, Miami went on a quick 8-0 run to extend its lead back to 32, before winning by a 28-point margin, 89-61.

“I thought our bench was really good. I think they played very well,” Meier said. “We had great contributions. I believe everyone scored. Zada played hard, Keke [Harris] played really hard. Some of the stuff we needed to have happen did, they responded and we got after it a little bit.”

Miami, which had a 39-6 edge in bench scoring, has now scored 80-plus points in both of its home games this season, joining an 80-46 victory against Charlotte in its opener at the Watsco Center. This was the most points Miami scored in a game since an 89-75 triumph over Indiana on a neutral court on Dec. 20, 2015.

The Hurricanes will take on Texas Tech in the championship of the Miami Thanksgiving Tournament Sunday at noon at the Watsco Center. Grambling State meets Fordham in the consolation game at 2 p.m.

·         After passing Kym Hope for the No. 10 spot on Miami’s all-time scoring list, Adrienne Motley now has 1,473 points and is nine behind Chanivia Broussard for ninth.