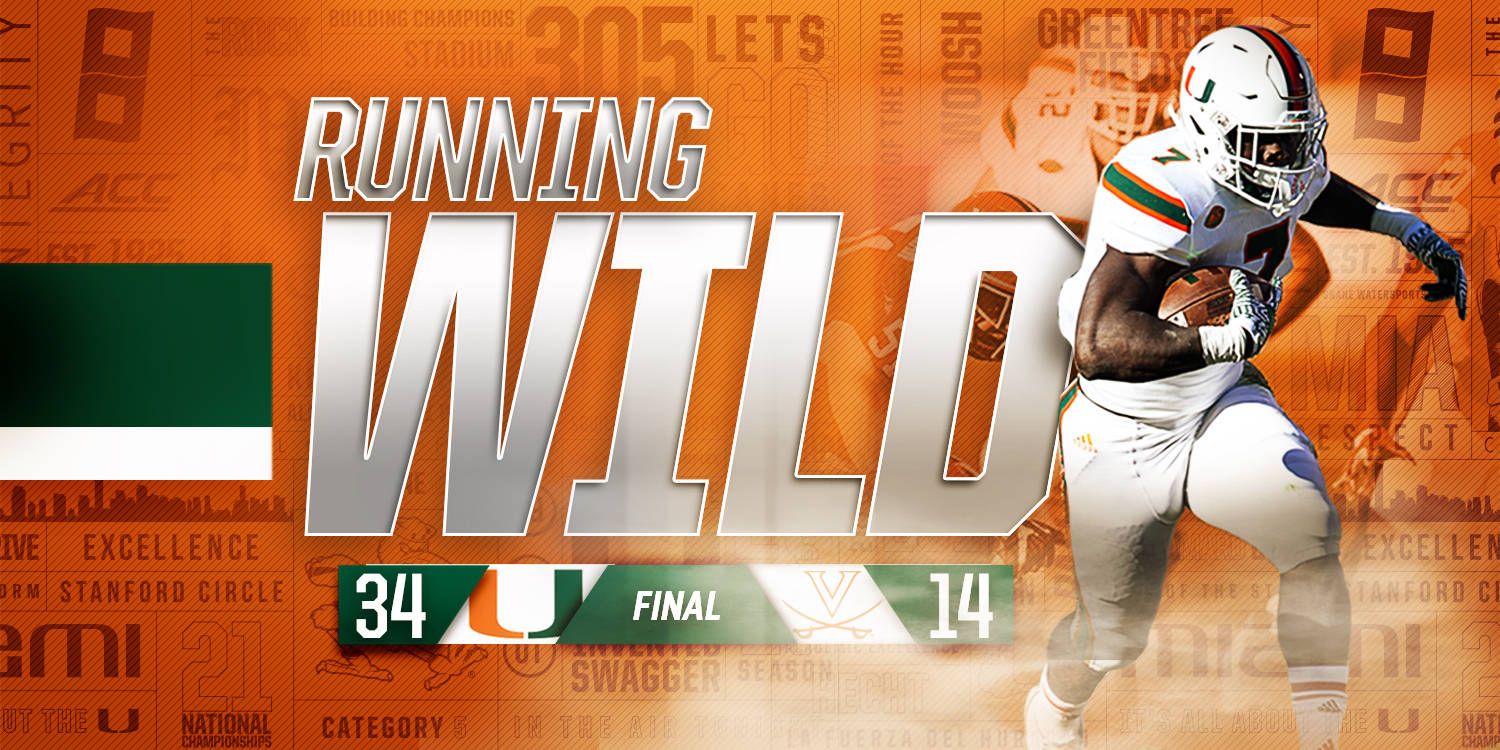 Canes Rush Past Virginia in 34-14 Win

With two new starters on a hurting offensive line, Miami piled up 222 rushing yards and 450 total yards in an 34-14 win over Virginia at Scott Stadium Saturday.

Running back Mark Walton recorded his fifth 100-yard game of the season, totaling 111 on 16 carries.

Gus Edwards added 68 while Joe Yearby finished with 53, as Miami outgained Virginia and star running back Taquan Mizell 222-82 on the ground.

The 222 rushing yards were the most recorded by Miami in an ACC game this season, besting last week’s total of 178 against Pittsburgh. Miami outgained Virginia 450-289 overall.

Junior Kc McDermott made his first start of the season at left tackle in place of an injured Trevor Darling, Alex Gall did the same at center for Nick Linder, and Tyler Gauthier made the start at left guard with McDermott’s sliding over to protect quarterback Brad Kaaya’s blind side.

Kaaya, who was sacked just once, finished 14-for-29 for 228 yards and two touchdowns.

Not to be outdone, the Hurricanes defense forced four turnovers and held the Cavaliers to just 82 rushing yards.

With the victory, Miami (6-4, 3-3 ACC) snapped a three-game losing streak in Charlottesville that dated back to 2008 and became bowl-eligible for the ninth straight season.

Leading by a precarious 20-14 margin with less than five minutes remaining in the third quarter, freshman Ahmmon Richards provided the spark for a Miami offense in need.

With the Hurricanes inside their own 25-yard line, Richards caught a pass for a first down on a 3rd-and-5 play, shook a Virginia tackler and ran 77 yards up the sideline to give the visitors a two-score lead at 27-14.

Facing an early 7-0 deficit after a turnover on their opening drive, the Hurricanes reeled off 17 straight points to take a first-half lead.

A 10-play, 75-yard drive was capped on a 10-yard touchdown run by Joe Yearby to tie the score 7-7 for Miami’s first points of the afternoon.

Kicker Michael Badgley put the Hurricanes ahead 10-7 with a 40-yard field goal on UM’s next drive, and Kaaya padded the lead when he found tight end David Njoku for a 7-yard touchdown with 9:28 left in the half.

Virginia cut the deficit to three points when quarterback Kurt Benkert hit David Eldridge on a slant route with under three minutes to go until half. The Hurricanes entered the locker room at halftime with a 17-14 lead.

Badgley connected on his second field goal of the afternoon – this one from 44 yards – to push Miami’s advantage to 20-14 on the opening drive of the second half.

On a 44-yard connection with Malcolm Lewis in the second quarter, Kaaya moved past Jacory Harris in the Miami record books into second place in all-time passing yards. With 228 yards Saturday, Kaaya now has 9,004 career passing yards in 35 career games.

One of the Hurricanes’ few blemishes came on their very first offensive play, when Kaaya was intercepted on an impressive strip of tight end Christopher Herndon IV by Virginia linebacker Micah Kiser.

The Cavaliers quickly capitalized on the prime field position, as running back Taquan Mizell rushed it in five plays later to give the hosts an early 7-0 lead.

Defensive back Corn Elder forced his first career fumble in the third quarter. Benkert fumbled on the hit from Elder, and the ball was recovered by freshman defensive end Joe Jackson.