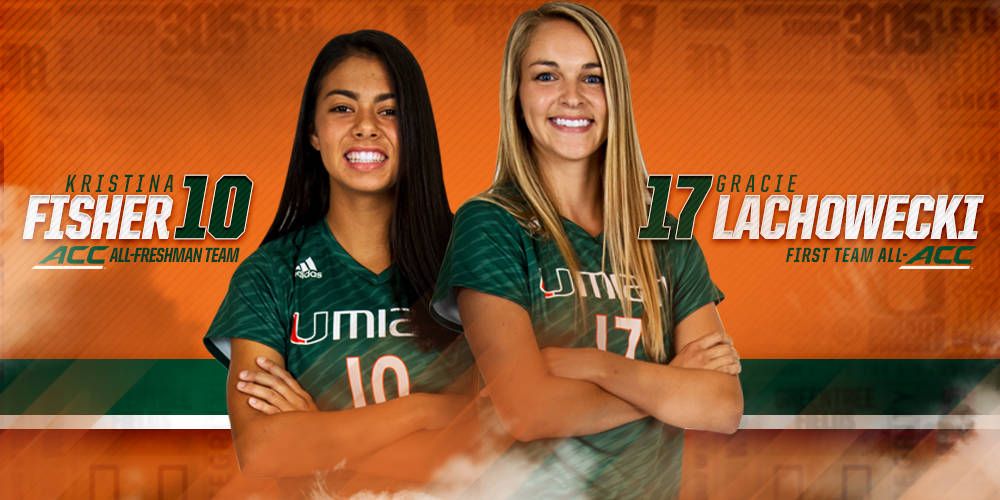 Lachowecki was tabbed as a First Team All-ACC selection, while Fisher was named to the ACC All-Freshman Team, as voted by the league’s head coaches.

A senior forward, Lachowecki is the third player in program history to be chosen as a first-team all-conference selection, joining Brittney Steinbruch in the ACC in 2007 and Vonda Matthews in the BIG EAST in 2002.

“I am so happy for Gracie,” Miami head coach Mary-Frances Monroe said. “She deserves this honor and has come up big for us all season. She is a very special player.”

After being a Second Team All-ACC pick last year, Lachowecki is now the first Hurricane to garner two All-ACC Team honors in her career. Additionally, she is just the third player in program history with multiple all-conference team accolades, along with Matthews (2000, 2001, 2002) Deidre Bass (1999, 2001), both of whom did so in the BIG EAST.

Lachowecki has tallied 11 goals and 25 points this season, figures that are tied for fourth and tied for sixth, respectively, on Miami’s single-season lists. The Evansville, Ind., native is the lone Hurricane with multiple double-digit goal seasons and ranks third all-time at Miami in goals (24) and fourth in points (54).

Fisher, a freshman forward, is the eighth player in Miami history to receive a conference all-freshman team distinction. She is one of three to do so since the Hurricanes joined the ACC, along with Steinbruch (2007) and Jasmine Paterson (2010).

“Kristina has had a very good freshman season, stepping up to start every game and scoring some great goals for us,” Monroe said. “I am excited to see how she grows in our program.”

Hailing from nearby Jupiter, Fla., Fisher enrolled at Miami in the spring of 2016 and began her career in style in the fall, earning NSCAA College Player of the Week honors after her first two matches, as she totaled three goals and three assists.

Fisher leads Miami in assists (six), is tied for first in game-winning goals (three), places second in points (20) and is tied for second on the team in goals (seven). Those numbers rank tied for sixth, tied for eighth, tied for fifth and tied for No. 10 in the ACC.

This is the second time the Hurricanes have had two players garner ACC postseason distinctions in the same season, joining 2007. Steinbruch was a First Team All-ACC pick and an ACC All-Freshman Team honoree, while Lauren Singer garnered Second Team All-ACC recognition.