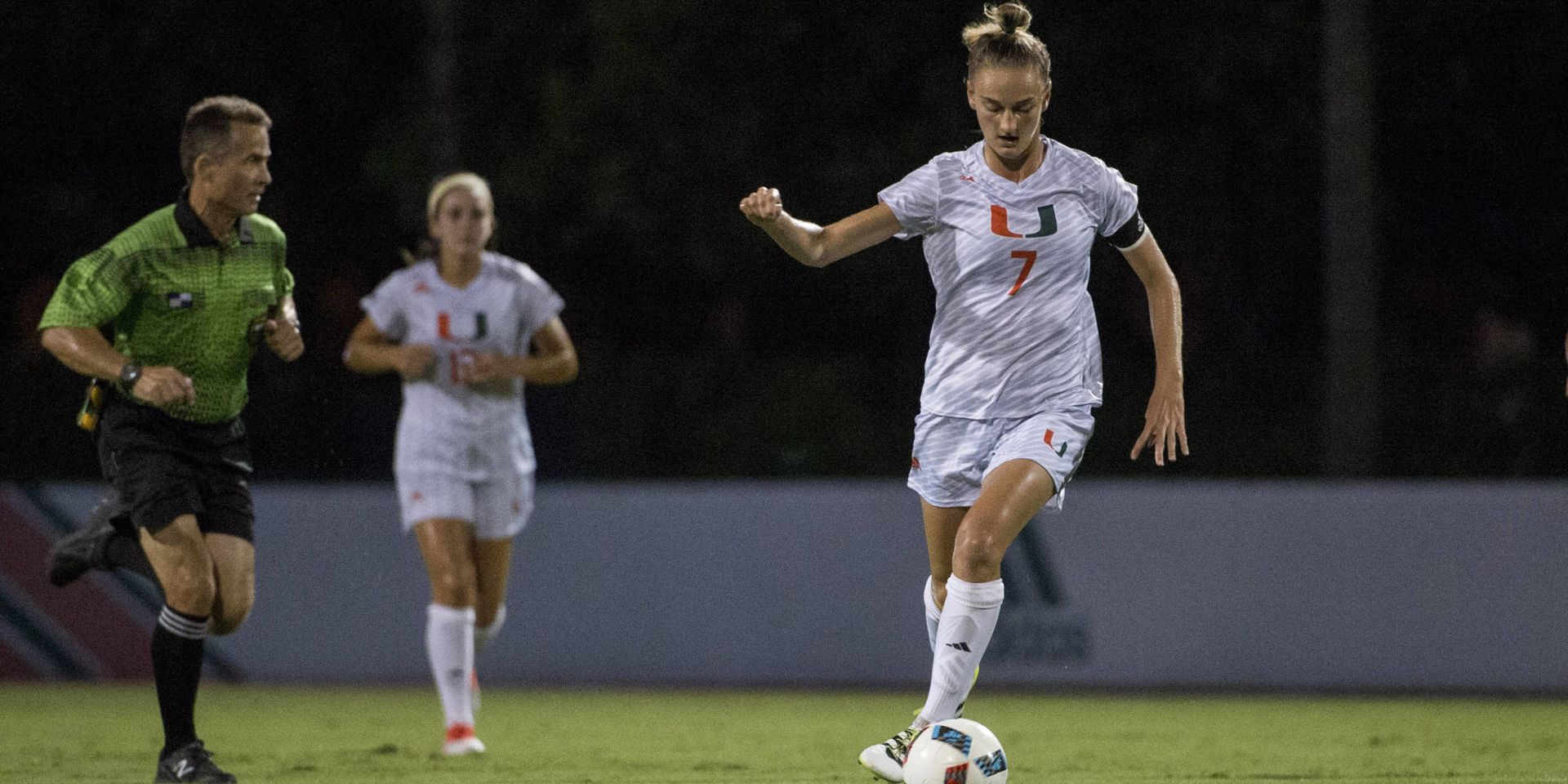 CLEMSON, S.C. – The University of Miami soccer team limited No. 18 Clemson to just one shot on goal Friday night at Historic Riggs Field, but that was all the Tigers needed to record a 1-0 victory.

The two sides played a largely even contest, but Miami (8-7-0, 3-4-0 ACC) was unable to come up with an equalizer, despite putting quality pressure on the Tigers’ back line.

Clemson (10-3-2, 4-1-2 ACC) has now won back-to-back ACC matches by a 1-0 final, while the Hurricanes have dropped consecutive conference outings by the same score.

Miami, which was facing its fourth top-20 foe in the last seven contests, had solid scoring chances in both the 18th and 19th minutes. However, Clemson came up with the match’s only goal in the 21st minute on its first shot attempt of the night.

Junior midfielder/forward Shannon Horgan received a pass from freshman midfielder/defender Dani Antieau and played a superb long cross to Jenna Weston at the top of the box.

Weston, a senior defender, controlled the ball and sent it to the upper left 90, past leaping Miami redshirt sophomore goalkeeper Phallon Tullis-Joyce, to put the Tigers on the board.

That would prove to be the lone shot on goal of the match for Clemson, which took a 1-0 lead into the locker room. Both teams had three shot attempts in the opening 45 minutes, with the Hurricanes putting two on frame.

The Hurricanes controlled possession for much of the second half, but the Clemson defense was up to the task and limited Miami’s dangerous opportunities.

Miami junior forward Ronnie Johnson led all players in both shot attempts (four) and shots on goal (two) in the match. Senior forward Gracie Lachowecki logged the team’s other shot on goal.

This was the fifth time in 2016 the Hurricanes have dropped a 1-0 decision, including the third such time in a match where they allowed a tally on the opponent’s only shot on goal of the game. Miami has conceded just one shot on goal four times this season.

With its three-match road swing complete, Miami will next host Louisville Oct. 20 at 7 p.m., in the first of two consecutive home matches to wrap up the regular season home slate.