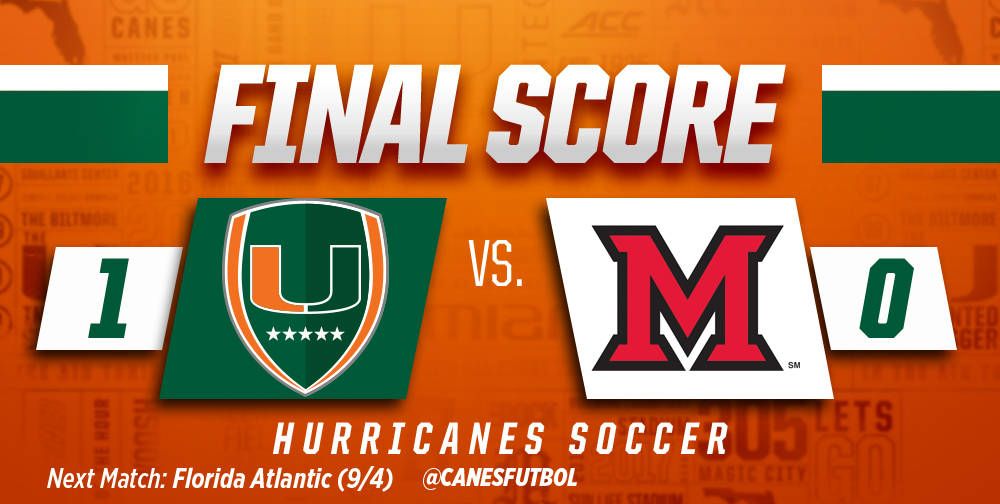 Making the first start of her career, freshman forward Dejah Cason gave the Hurricanes (4-1-0) the only offense they would need against the RedHawks (1-3-0) with an early goal that stood the rest of the way.

“We’ve been having a lot of success in the beginning of the season and I think this game was a good test for us in terms of continuing to play as a team,” Miami head coach Mary-Frances Monroe said of the win.

Junior forward/midfielder Grace Rapp nearly put the Hurricanes ahead in the ninth minute, but her shot in the box rang off the near post.

The Hurricanes opened—and closed—the scoring in the 16th minute when freshman forward Kristina Fisher and Cason connected for a goal. To earn her 16th point of the season, Fisher sent an outstanding cross from the endline just outside the six-yard box and Cason headed the ball past RedHawk senior goalkeeper Vic Maniaci.

“Amazing goal by Dejah, a freshman,” Monroe said. “It was freshman to freshman, Kristina Fisher to Dejah. She got up and won the ball in the air. So, it was a fantastic first goal for her career here at Miami.”

The Hurricanes had several good opportunities throughout the opening half and entered the locker room with an 11-5 edge in shots.

In the second half, the Hurricanes continued to pepper the RedHawks with shot attempts, but were unable to convert for a second time. Between the 68th and 83rd minute, the Hurricanes had 11 shots, including six that were saved by Maniaci, who finished with nine stops, and three others that were blocked by the Miami (OH) defense.

Redshirt sophomore defender Danielle Savage made the play of the night for the Hurricanes in the 84th minute. RedHawk freshman midfielder/forward Olivia Winnett had an open net from just a couple yards out, but Savage came sliding in to keep it out of the goal and prevent the equalizing goal.

The play by Savage, who saw a career-high 45 minutes of action, drew a hug from redshirt sophomore goalkeeper Phallon Tullis-Joyce and raucous cheers from the Hurricane bench.

“I’m really proud of her for recovering. That’s our standard,” Monroe said. “That’s her job, that’s what she’s supposed to do, but she tracked back about 30 or 40 yards at full pace knowing that she had a job to do. She was in the right place and was able to save the ball off the line.”

The Hurricanes ended the match with a 27-9 advantage in shot attempts, including a 10-3 lead in shots on goals.

This is the ninth time in program history the Hurricanes have won at least four of their first five matches. Additionally, this is just the second time they have posted four shutouts in their first five outings of a season, joining 2008.

The Hurricanes will be back in action Sunday afternoon when they host Florida Atlantic at 1 p.m., at Cobb Stadium.