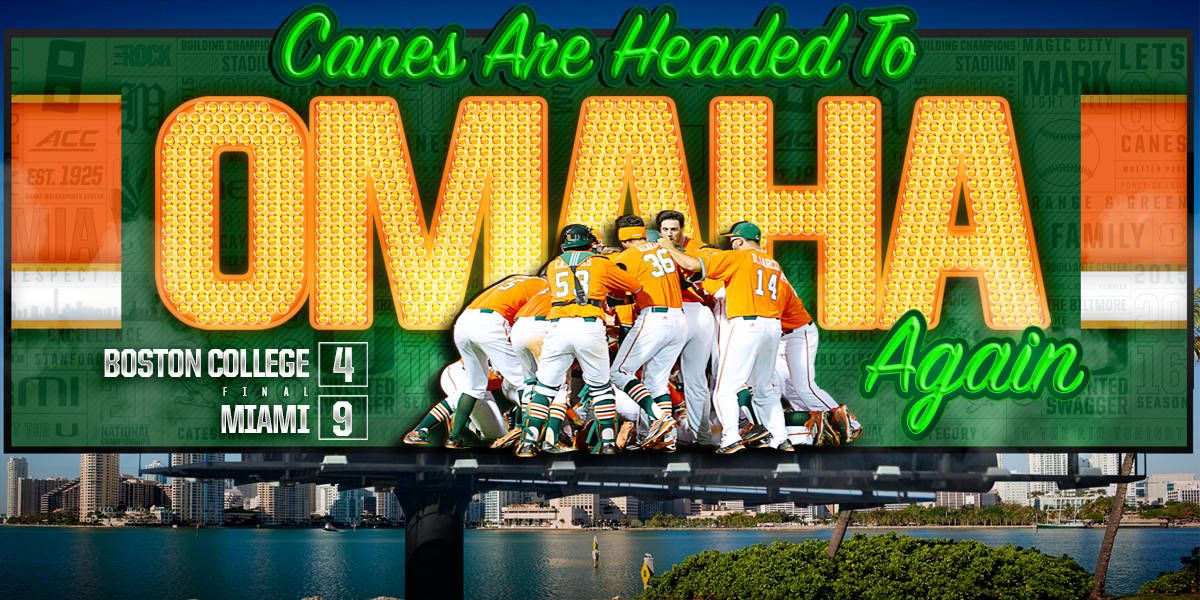 CORAL GABLES, Fla. – For the second straight season, the Miami Hurricanes will be returning to the College World Series.

Thanks largely to a two-home run, seven-RBI performance from redshirt junior Edgar Michelangeli, the Hurricanes punched their ticket to Omaha, Neb., with a 9-4 win over Boston College in Game 3 of the NCAA Coral Gables Super Regional at Alex Rodriguez Park at Mark Light Field.

Michelangeli, who connected on a three-run homer in the second inning and the first grand slam of his career in the seventh, powered a Miami offense that outhit the Eagles, 14-7. The Hurricanes received a sparkling performance on the hill from freshman Frankie Bartow, who served as a bridge to junior closer Bryan Garcia for a career-long 3.1 innings with the game’s outcome hanging in the balance.

Bartow (6-0), who threw 51 pitches, gave way to Garcia with two outs in the eighth, and the school’s all-time saves leader recorded the final four outs to send 2,589 fans into celebration.

The College World Series trip will be the 25th in program history, the second-most of any school nationwide

“I would like to congratulate our guys. Again, it was a team effort and that’s what it takes to win,” head coach Jim Morris said. “We’ve had some very talented teams, but it wasn’t necessarily the best team that won, it was the team that played together as a team..

The Hurricanes found early success against Boston College righthander Jacob Stevens, jumping out to a 4-0 lead after two innings.

Miami (50-12) recorded three straight hits to open the second inning, including an RBI single from junior Willie Abreu that plated junior Johnny Ruiz, who doubled to open the frame.

A bunt single from junior Jacob Heyward put two runners on base, and Michelangeli then cranked the first pitch he saw from Stevens (4-4) over the fence in left for his fourth home run of the season.

The Eagles (35-22) fought back, halving the deficit on a two-out, two-RBI single from Donovan Casey off freshman Andrew Cabezas. Senior lefthander Thomas Woodrey entered in relief and struck out Eagles third baseman Joe Cronin to strand a pair and maintain a 4-2 lead.

The two teams traded RBI groundouts in the fourth and fifth innings, and with Miami leading 5-3 in the seventh, Michelangeli delivered the knockout blow.

An Abreu walk and back-to-back singles from Heyward and redshirt junior first baseman Christopher Barr loaded the bases with one out. Facing a 3-2 count, Michelangeli crushed a pitch from reliever Jesse Adams over the fence in left to bump Miami’s lead to six runs at 9-3.

“I thought we had them with their backs again the wall. It was full count and the bases loaded, so I knew he didn’t want to walk me, especially with me being the nine-hole hitter,” Michelangeli said. “I knew I wanted to be aggressive on that pitch, and I got a pitch I could drive.”

The seven RBI by Michelangeli were a career high and tied for the most by a Hurricane all season. Tempers flared following the home run and both teams were given a warning after benches cleared.

Bartow came back out for the eighth and loaded the bases on a single and two walks. After allowing an RBI single to Chris Balogh to cut Miami’s lead to 9-4, Garcia entered and struck out BC leadoff hitter Jake Palomaki.

Garcia recorded a 1-2-3 ninth inning to secure the 43rd save of his career and 18th of the year, the fourth-most in a single season in Miami history.

“A lot of players had big days if you look up and down the lineup. It was a total team effort. I’m very proud of them, and I’m looking forward to going to Omaha,” Morris said. “For the rookies, you tell them what’s like, but when you walk through those doors on the field and go out [to the field] at night, it’s an unbelievable feeling. I’m excited about that for them and for our team.”

Abreu, serving as a team captain for the second straight season, said he thinks the team will be better prepared for this year’s trip than it was last season.

“Obviously, last year going to Omaha, we hadn’t been in a while and no one on the team had been there except the coaches. It might have caught us a little bit by surprise,” he said. “That’s not the case this year.