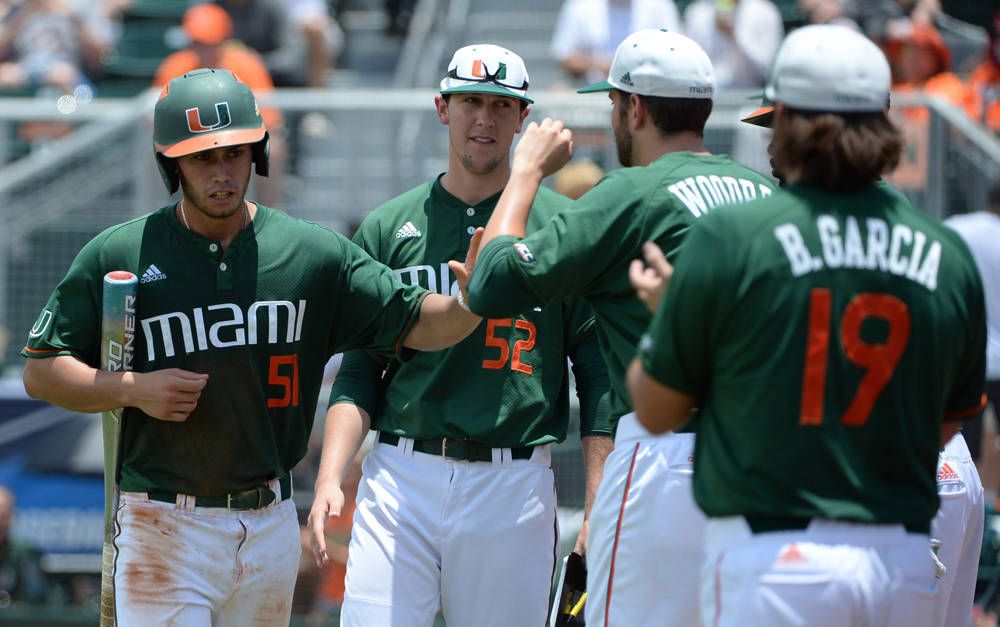 Baseball Falls to BC, 5-3, to Even the Series

CORAL GABLES, Fla. – Miami brought the tying run to the plate in the ninth inning after a near three-hour weather delay, but fell to Boston College, 5-3, in Game 2 of the NCAA Coral Gables Super Regional Saturday at Alex Rodriguez Park at Mark Light Field.

The loss set up a decisive Game 3 to be played Sunday at noon (ESPNU), with the winner advancing to the College World Series in Omaha, Neb.

It was Miami who struck first on the second home run in as many days by junior slugger Zack Collins. Facing off against Boston College righthander Mike King, Collins sent a 1-1 pitch over the fence in right to give Miami a 1-0 lead in the fourth inning.

The Hurricanes (49-12) would add another run in the frame to double their advantage to 2-0. Singles from senior Brandon Lopez and junior Willie Abreu put runners on the corners with one out, and Jacob Heyward delivered a flared single into right to add to the early lead.

A single from Christopher Barr loaded the bases, but King retired the next two batters to hold the damage at two Miami runs.

The Eagles would respond, however, plating four runs of their own in the home half of the frame to take a 4-2 lead. Donovan Casey opened the inning with a solo home run, and Mitch Bigras delivered a two-RBI single to right that was misjudged by Abreu, resulting in a rare error on the right fielder.

“It can’t happen, that’s the bottom line. That shouldn’t happen at all, the way we were taught to do things,” Abreu said. “It was an error [and I have] just got to get over it. Got a bad jump on the ball, tried to make up for it, wasn’t able to get it. It is what it is. Tomorrow’s a new day. We got to come out here and get that W.”

Junior Johnny Ruiz, who connected for a career-best five RBI in Friday’s win, put Miami back within one on a triple down the rightfield line that scored Lopez in the fifth.

King (8-4) tossed six effective innings for Boston College, surrendering nine hits and three runs. He walked four and struck out six across 99 pitches before giving way to the Eagles bullpen to start the seventh.

Junior Danny Garcia allowed eight hits and four runs (two earned) in 5.2 innings. Garcia (9-4), who was drafted by the Seattle Mariners in the 15th round while on the mound, struck out four, walked two, and was relieved with two outs in the sixth when Boston College (35-21) put two runners aboard.

Freshman Andrew Cabezas entered in relief and promptly induced a foulout from Michael Strem to end the threat.

Heading to the ninth and with Miami down to its last three outs, the game was temporarily halted at 2:56 p.m., with lightning in the area. Play resumed at 5:51 p.m., resulting in a delay of 2 hours and 55 minutes.

Sophomore Carl Chester connected on a one-out single to keep comeback hopes alive, but Boston College reliever Bobby Skogsbergh induced a flyout from Randy Batista and a strikeout from Collins to end the game and earn his fourth save of the year.

“This is the game of baseball and there’s ups and downs,” Lopez said. “Our team’s a confident team. As coach [Morris] said, we have one game to get to Omaha and we couldn’t be happier that it’s at home.”

The two teams will return to Alex Rodriguez Park Sunday for the decisive game. First pitch, slated for broadcast on ESPNU and 560 WQAM, is set for 12 p.m.