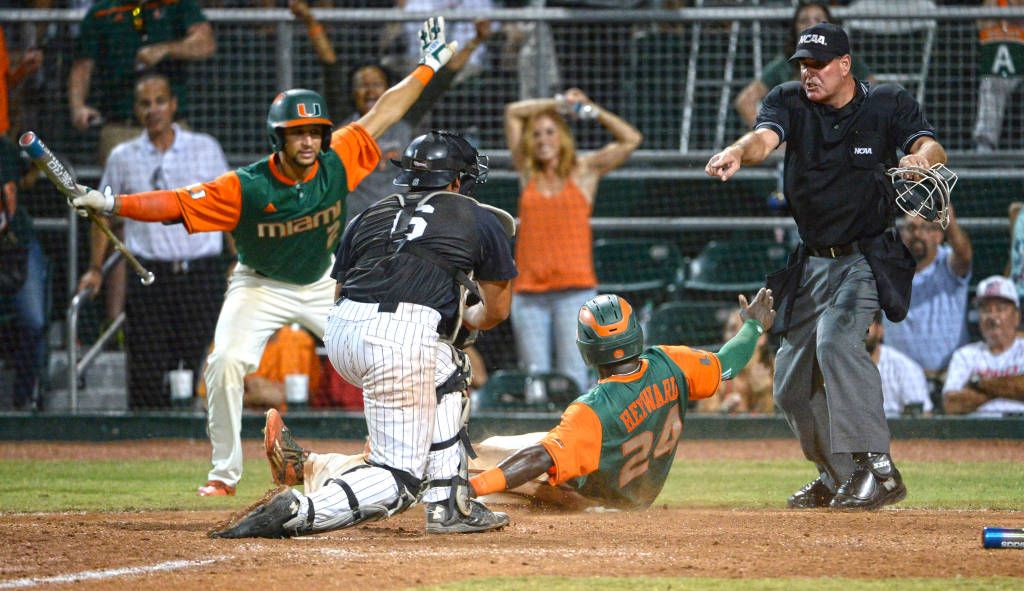 CORAL GABLES, Fla.  – Sophomore Carl Chester capped a three-hit day with the go-ahead single in the top of the 11th inning, as the No. 1 seed Hurricanes topped No. 3 seed Long Beach State 4-3 in a winners’ bracket game at the NCAA Coral Gables Regional.

Miami (47-11) was one strike away from securing a place in the Coral Gables Regional Championship Game two innings earlier, but an unlikely, pinch-hit home run by Dirtbags infielder Jeff Nellis with two outs in the bottom of the ninth forced extra innings.

Chester’s single to left off LBSU reliever Austin McGeorge was just the second two-out hit of the night for the Hurricanes, and scored junior Jacob Heyward to put Miami ahead. Heyward walked to open the 11th, took second on a sacrifice bunt, and then beat the throw from left fielder Garrett Nelson, sliding in safe at home and sending 2,530 fans into an early celebration.

“I guess it was a close play,” Chester said. “I was watching the ball, trying to [see if I should] take first or second, but just glad Heyward’s got speed, so he could sneak in there.”

“Wow. What a great game by both teams,” head coach Jim Morris said. “Long Beach State’s got an outstanding team and their pitching is outstanding. They’re fundamentally sound…we’re very fortunate to beat them, but we had some big efforts.”

LBSU plays FAU in an elimination game Sunday at 1 p.m. The Hurricanes will play the winner of that game Sunday night at 7 p.m. with a chance to advance to the NCAA Super Regional round for the second straight season.

Mediavilla proved himself a worthy competitor to McCaughan, as he scattered seven hits and allowed just two runs in one of his strongest outings of the season.

The Hurricanes trailed for the early parts of the game and didn’t take their first lead until the seventh inning, when a botched defensive play by the Dirtbags (37-21) put Miami ahead 3-2.

Freshman Frankie Bartow pitched a scoreless eighth before the late dramatics from Nellis. The hit was just the third all season for Nellis, who entered the at bat hitting .095 for the season.

“You’re going right after him in that situation because there are two outs and two strikes,” Morris said. “You got to go right after him. The wind was blowing out and he hit it good. It actually hit Heyward’s glove, barely. It nicked his glove as it went over the fence. It’s unbelievable that, that happens.”

A third-inning solo home run from Jarren Duran and an RBI double by Brock Lundquist were the only blemishes in an otherwise stellar night for Mediavilla, who found success against the Dirtbags lineup.

Mediavilla worked his way out of significant damage for most of the night, including in the fourth when LBSU had runners on the corners with one out. On an attempted squeeze play, Mediavilla charged forward, scooped the slow roller and shoveled the ball to catcher Zack Collins, who tagged Luke Rasmussen for the second out of the inning.

Domenic Colacchio then grounded into a fielder’s choice to end the threat, leaving the Hurricanes with a one-run deficit.

McCaughan was dominant in the early going, facing the minimum number of batters through the game’s first four innings. He allowed just one hit – a single from senior Brandon Lopez – through his first five, and did not allow a runner to reach as far as second until the sixth, when Miami tied the game on their third time through the order facing McCaughan.

“Tip your cap off to him. He was pitching a great game,” Mediavilla said of McCaughan. “It was just back and forth, and they went up first with the home run. My team, we always battle back, it always happens. That’s the ‘Mark Light Magic.’”

Redshirt junior Christopher Barr opened the sixth with a single to left, and took second on a sacrifice bunt. Chester, who grounded out in his first two at bats against the righthander, lifted a single to left to plate the speedy Barr from second.

With the hit, Chester successfully reached base for the 21st straight game.

The Dirtbags regained the lead in the home half of the inning on an RBI double from Brock Lundquist. Mediavilla once again worked magic, however, striking out back-to-back batters with the bases loaded to limit the damage to just one run.

“I was able to get a majority of the leadoff batters out,” Mediavilla said. “We knew they were going to be a quick team and they weren’t going to be hesitant to bunt in any situation, especially if I started falling over too much, they were going to start push-bunting and drag-bunting. We were able to minimize that.”