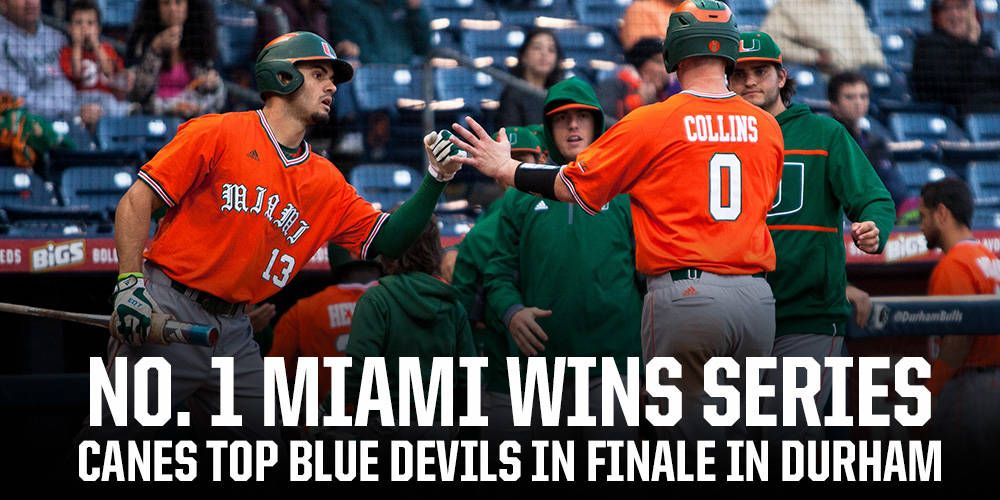 After splitting a pair of lopsided games on Friday and Saturday, No. 1 Miami won for the 24th time in its last 27 contests dating to March 2. The shutout was the fourth of the season for Miami.

The Hurricanes (29-5, 13-3 ACC) have not lost a series since dropping two of three to then-No. 1 Florida from Feb. 26-28, and could have a five-game lead in the ACC Coastal Division by the conclusion of the weekend.

Junior lefthander Danny Garcia picked up his second win of the week in an impressive performance. Five days after throwing 49 pitches in a victory over Nova Southeastern, Garcia needed just 92 to get through seven shutout innings.

Junior Zack Collins provided Garcia all the offense he needed on a three-run home run in the third inning. The homer was the team-leading eighth of the season for Collins, who reached base for the 29th straight game.

Sophomore Carl Chester opened the scoring with an RBI infield single two at bats prior to the blast from Collins, which cleared the fence in right-center. Peter Crocitto (double) and Randy Batista (single) also had hits in the inning.

Miami tagged Duke righthander Brian McAfee for three more runs in the fifth to push its lead to 7-0.

All five hits in the inning were singles, including RBI basehits from Johnny Ruiz, Jacob Heyward and Brandon Lopez.

McAfee (5-3) was tagged for career high-tying totals of seven earned runs and 10 hits across 5.0 innings.

Batista finished 2-for-3 with two runs scored, while Lopez reached base for the 18th straight game with his RBI single in the fifth.

Garcia (6-2) avoided any damage despite allowing eight hits. He escaped a two-on, no-out jam in the bottom of third after Miami had taken the lead, and got Michael Smiciklas on a flyout to center with runners on the corners to end the sixth.

Garcia struck out three batters and walked one to send Miami to its ninth win in its last 10 games against the Blue Devils (20-17, 7-11 ACC).

Junior Barry Buchowski led off the ninth with a pinch-hit double and scored on a wild pitch from Duke reliever Mitch Stallings. Lopez added an RBI infield single as late insurance.

Miami returns to Alex Rodriguez Park at Mark Light Field Wednesday for the first game of an eight-game homestand against FAU. First pitch for the contest, slated for broadcast on ESPN3, is set for 6 p.m.