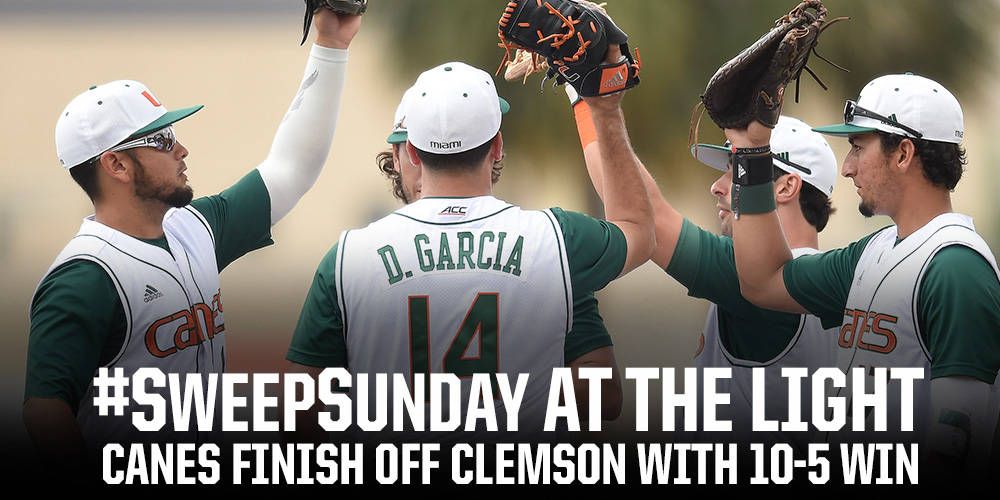 CORAL GABLES, Fla. – Fourth-ranked Miami finished off its first ACC sweep of the season Sunday afternoon, as the Hurricanes topped No. 17 Clemson 10-5 in the series finale at Alex Rodriguez Park at Mark Light Field.

After capturing back-to-back walk-off wins to open the series, the Hurricanes moved into sole possession of first place in the ACC Coastal Division with a much less dramatic victory.

With its bullpen depleted after two lengthy night games, the Hurricanes (20-4, 7-2 ACC) received seven strong innings from junior lefthander Danny Garcia when they needed it most.

Garcia (4-2) scattered eight hits and just one walk with three strikeouts. All three runs allowed came on solo homers, which was perfectly okay with Garcia.

“I was just trying to [make Clemson] put the ball in play,” Garcia said. “I wasn’t thinking strikeout or anything. I had three mistakes, which were the solo home runs, but they didn’t affect us. I’d rather allow that than walking guys for more runs, which didn’t happen.”

“Clemson has a very good club, and we played well all weekend, starting with our defense,” Morris said. “We made a lot of plays. Today was nice coming out to try to get a sweep…against a club like [Clemson], that’s something that really helps you in the national spotlight.”

Sophomore Carl Chester led the offense by reaching base five times from the leadoff spot.

He reached base 13 times on the weekend as a catalyst for the Hurricanes offense, raising his on-base percentage to .473.

“Just being patient and taking a lot of pitches,” Chester said about his approach against the Tigers. “I think I walked five times, but just being a leadoff hitter and trying to get on base for my team.”

Chester’s RBI single in the fourth put Miami ahead 3-1, and a five-run fifth where the Hurricanes sent 11 batters to the plate padded the lead to 8-1.

An RBI single from Johnny Ruiz, an RBI groundout from Willie Abreu, a sac fly from junior Edgar Michelangeli and a bases-loaded walk drawn by Collins helped ease any stress of the 2,480 in attendance.

Though he allowed two solo home runs in the top of the sixth, Garcia said he was focused on forgetting about the mistakes and focusing on the next batter.

Chase Pinder (twice), Chris Okey and Seth Beer all homered for the Tigers.

Redshirt freshman Keven Pimentel allowed five hits over 1.2 innings in relief, while freshman Isaiah Musa recorded the final out by getting the dangerous Beer on a groundout to first base.