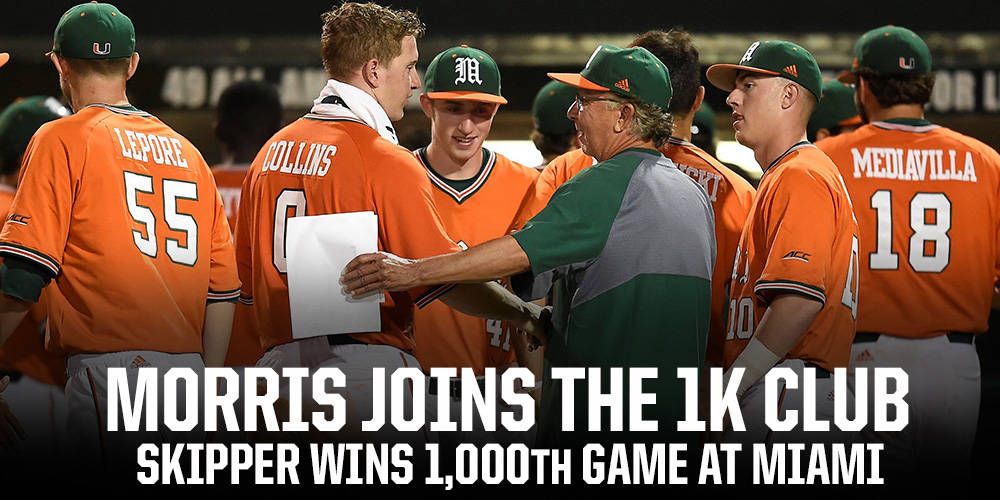 A walk-off single in the bottom of the 11th inning propelled head coach Jim Morris to his 1,000th career victory as skipper of the Hurricanes Saturday night, as Edgar Michelangeli lifted fourth-ranked Miami to a series-clinching 5-4 victory over No. 17 Clemson.

The win was the second milestone reached in a little over a week for Morris, who became just the sixth coach to win 1,500games as a Division I head coach last Friday in similar walk-off fashion against Louisville.

When asked to reflect on his 23 seasons at the University of Miami, and if he ever thought he could reach 1,000 wins in Coral Gables, Morris paused.

“I really didn’t. It was the furthest thing from my mind,” he said, fighting back tears. “I was following, to me, the most influential coach in the history of college baseball – that’s Coach [Ron] Fraser. I wouldn’t have come here if it wasn’t for him.”

With Saturday night’s win, Morris joined his predecessor Fraser as the second coach in the history of Miami baseball to achieve 1,000 wins in Coral Gables.

Fraser won 1,271 games in 30 seasons as head coach of the Hurricanes.

“You’re following an impossible act,” Morris said. “As I told him, I’m the following the Bear Bryant of football, the John Wooden of basketball. Ron Fraser is in that same category…The only reason I came is because I knew he was with me.”

A career night from Michelangeli helped Morris in his quest for 1,000.

With two runners on base and one out, Michelangeli laced a pitch from reliever Alex Bostic through the rightside to score a sliding Johnny Ruiz from second. The hit was the fourth of the night for Michelangeli, who finished a career-best 4-for-6 at the plate.

“Just trying to hit it hard somewhere, trying to make things happen,” Michelangeli said. “Happened to go through the [gap between] first and second.”

With a base open, Bostic (3-2) intentionally walked Friday night hero Willie Abreu before deciding to pitch to Michelangeli, who delivered his fourth hit of the night.

The win was Miami’s third walk-off victory in a span of six games dating to March 18.

Clemson (17-5, 5-3 ACC) struck first Saturday night, as freshman standout Seth Beer connected on a line drive home run to center off sophomore Michael Mediavilla to give the Tigers a 2-0 advantage.

Miami (19-4, 6-2 ACC) would respond immediately, however, as an RBI single from junior slugger Zack Collins halved the deficit to 2-1 in the home half of the first.

The hit extended Collins’ streak of reaching base to 18 straight games.

The Hurricanes plated single runs in next three innings to take a 4-2 lead.

An RBI groundout from freshman Romy Gonzalez in the second, an RBI double from Brandon Lopez in the third and an error by Clemson in the fourth all led to Miami runs.

Mediavilla struggled with command during a 100-pitch outing that spanned just four innings. He walked four batters and struck out six, but surrendered just two runs on the Beer homer.

Clemson tied the game in the sixth on a two-run home run from Chris Williams off Miami reliever Keven Pimentel.

The Hurricanes looked poised to regain the lead in the seventh when they loaded the bases with one out, but an inning-ending double play kept the score locked at 4-4.

With Chris Okey at first and facing the dangerous Beer in the top half of the 10th, Bartow induced a double play to keep the score locked at 4-4.

“I was just throwing strikes, letting him put it in play to see what happens,” Bartow said. “That’s what he did. Got the ball, turned it and got him out.”

Bartow (2-0) earned his second career win to clinch the milestone night for his head coach.

“I’ve seen it on Twitter,” Bartow said when asked if he know about the win being the 1,000th for Morris. “We tried to treat it like a regular game, and we just got it done.”