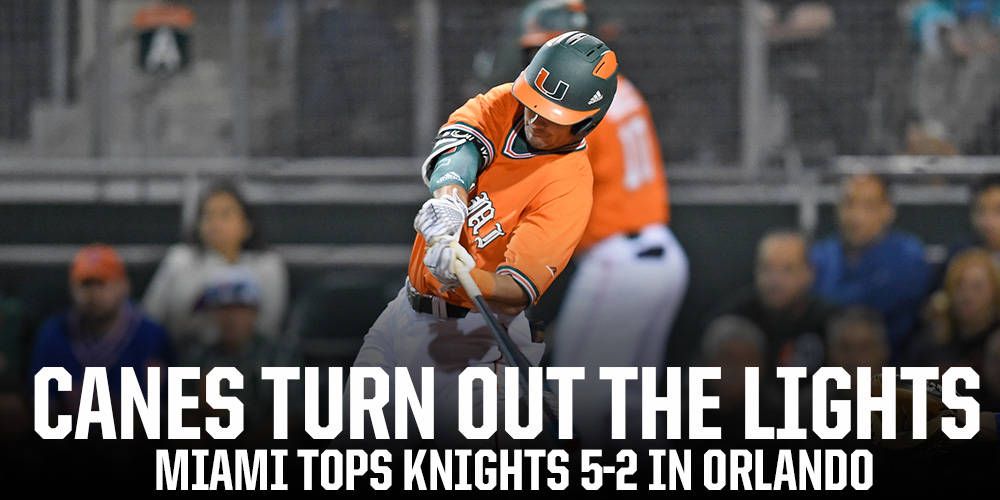 Leading 3-2 after five innings, Miami (14-3) added insurance runs in the eighth and ninth to clinch its ninth victory in the last 10 tries.

In a game delayed 20 minutes when the power went out, leaving the field pitch black in the top half of the ninth inning, the Hurricanes remained unbeaten in road games in the all-time series, improving to 7-0 in front of 2,434.

The Hurricanes bullpen was strong again in Wednesday’s win.

For the second straight outing, freshman Andrew Cabezas was dominant in relief. The righthander tossed two scoreless innings after entering in place of Lepore in the sixth.

Freshman Frankie Bartow pitched a scoreless eighth inning while junior closer Bryan Garcia recorded his sixth save of the year and 31st of his career with a scoreless ninth.

The Hurricanes plated two runs off UCF righthander Juan Pimentel in the game’s first inning to jump out to an early lead.

With sophomore Carl Chester in scoring position after a leadoff single and sacrifice bunt, junior Zack Collins connected on an RBI single through the right side to plate the speedy Chester from second base.

Collins reached base for the 12th straight game with the basehit.

Miami wasn’t done there. The visitors plated a second run when junior Jacob Heyward (walk) took off for second on an attempted steal two batters later. UCF catcher Logan Heiser’s throw was ruled not in time by the umpire, and Collins scored easily from his perch at third on the play.

UCF (10-8) got a run back on an RBI single from Eugene Vazquez that put two runners in scoring position and cut Miami’s lead to 2-1. Lepore maintained his composure, recording back-to-back strikeouts of Logan Heiser and Kam Gellinger to keep his team ahead.

The Knights tied the game 2-2 on an RBI single to center field from Gellinger in the fourth. Lepore once again stranded two runners after the hit, however, inducing a groundout from UCF leadoff hitter Luke Hamblin to avoid any further damage.

Pimentel settled down after the tough first inning to keep the Hurricanes at bay. Miami broke through in the fifth to chase the righthander, as the visitors regained the lead on an RBI single from Johnny Ruiz.

With Chester (double) on second and Collins (intentional walk) on first, Ruiz cracked an opposite-field single that scored a sliding Chester to put Miami ahead 3-2.

Cabezas entered in relief of Lepore (3-0) after the sophomore walked the leadoff batter in the sixth.

The Hurricanes return to Alex Rodriguez Park at Mark Light Field Friday for a series-opening matchup with fourth-ranked Louisville. First pitch for the game, slated for broadcast on ESPN3, is set for 7 p.m.