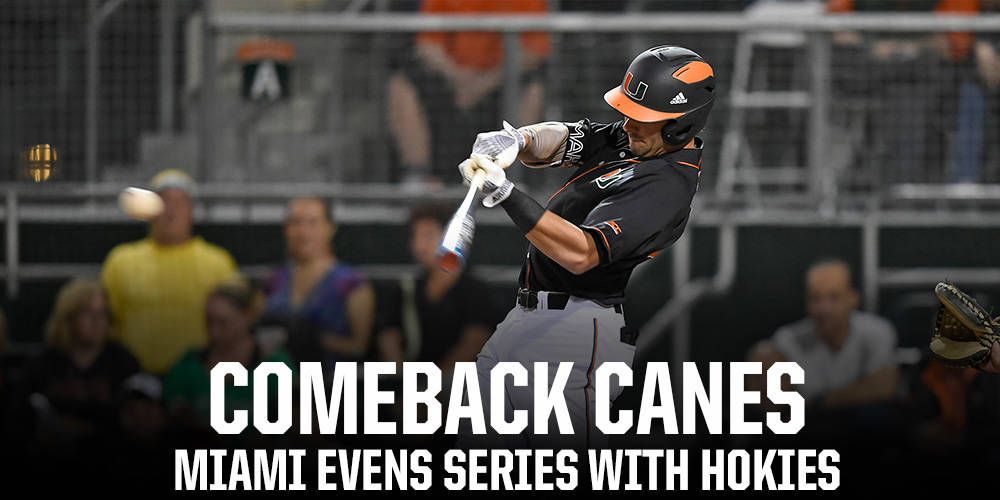 BLACKSBURG, Va. – Sixth-ranked Miami came from behind to even its opening ACC series with host Virginia Tech Saturday, posting an 11-6 win over the Hokies at English Field.

Facing a three-run deficit after four innings, the Hurricanes (12-3, 1-1 ACC) clawed back with single runs in the fifth and sixth to cut Virginia Tech’s lead to 5-4.

A three-run seventh, which included a game-tying single from junior Edgar Michelangeli, gave the visitors their first lead of the weekend. An RBI double from junior Carl Chester scored Michelangeli to put Miami ahead 6-5, while Zack Collins’ sacrifice fly gave Miami a two-run lead.

“It was a huge win for us. Anytime you win on the road, it’s big,” head coach Jim Morris said. “It’s a tough conference…like I told the guys, it’s a different deal playing in the ACC against these teams.”

Miami put the game away with a three-run ninth inning that included a two-RBI single from Johnny Ruiz and a sacrifice fly from Jacob Heyward.

The Hurricanes, who could not overcome a similar early deficit in Friday’s opening contest, won for the seventh time in the last eight games. Miami posted seven of its 11 runs over the game’s final three innings.

“We got down big early yesterday and we tried to fight back, but we gave up runs and never got back in it,” Morris said. “Today, we got down early and the team fought back.”

Just as important to the comeback was a dominant outing from freshman Andrew Cabezas. The righthander entered in the fifth with Miami trailing 5-2 and struck out five batters over three innings of relief.

“This was probably my best game, where all my stuff was working,” Cabezas said. “I just wanted to get ahead, throw strikes and get outs as quick as possible to get our hitters going.”

Cabezas picked up his first career win in front of 1,457, setting up a rubber match to be played Sunday at 11 a.m.

“He pitched really well. We have high expectations for him,” Morris said. “We thought he was as good as anybody in Dade County last year, so we have very high expectations, and he does too. We expect him to have a great career at Miami.”

Junior Bryan Garcia earned his fifth save of the season with a second straight six-out rendition. The save was the 30th of his career, moving him into sole possession of fourth place in Miami history.

The Hokies (10-6, 1-1 ACC) scored in the first inning for the second time in as many days, plating three runs to jump out to an early lead. A sacrifice fly from Phil Sciretta and a two-RBI double from Nick Anderson off Miami junior Michael Mediavilla gave the hosts a 3-0 advantage.

Miami struck for two runs in the top half of the second to shave the deficit to 3-2.

“I’ve never hit a home run in college, so I definitely didn’t think it was gone,” Ruiz said. “I thought I hit it well…it was probably the first ball I’ve pulled in the air this season. I got a pitch in, put a good swing on it, and it carried.”

Two batters later, junior Willie Abreu cracked an opposite-field double to the left field corner. Michelangeli then connected on a single through the left side off Scheetz to plate Abreu from second.

Virginia Tech bumped its lead to 5-2 with a two-run home run from Grant Maiorana in the fourth inning.

Mediavilla, who allowed a career-high five runs, exited after 109 pitches. He struck out a career-best nine batters and walked two before giving way to Cabezas.

“Virginia Tech is a good team,” Ruiz said. “They’ve jumped out on us two games in a row. Yesterday, we fought a little bit…but today, we kept going and kept going.”

The visitors began their comeback when a sacrifice fly from Chester made it 5-3 in the top of the fifth inning. One inning later, Ruiz drove a pitch from Scheetz to center field to score junior Jacob Heyward from second to make it 5-4.

“We chipped away little by little,” Ruiz said. “It says a lot about our team that we can play with that energy and enthusiasm even though we were down and have been down the last couple games.”

Cabezas (1-0) was brilliant in relief, needing 42 pitches to get through three innings. He allowed one hit and one walk.

“I just wanted to keep my team in the game,” Cabezas said. “My job is to put up zeroes on the board.”

The Hokies struck for a run in eighth when they strung together three straight hits off freshman Frankie Bartow. But Garcia, who also recorded a save last time out vs. Stetson, pitched Miami out of any damage with two strikeouts and a popout.

He tossed a scoreless ninth and tied a career high with four strikeouts for the second game in a row.

The Hurricanes return to English Field Sunday for game three of the series with Virginia Tech. First pitch for the contest, slated for broadcast on WVUM 90.5 FM and WVUM.org, is set for 11 a.m.