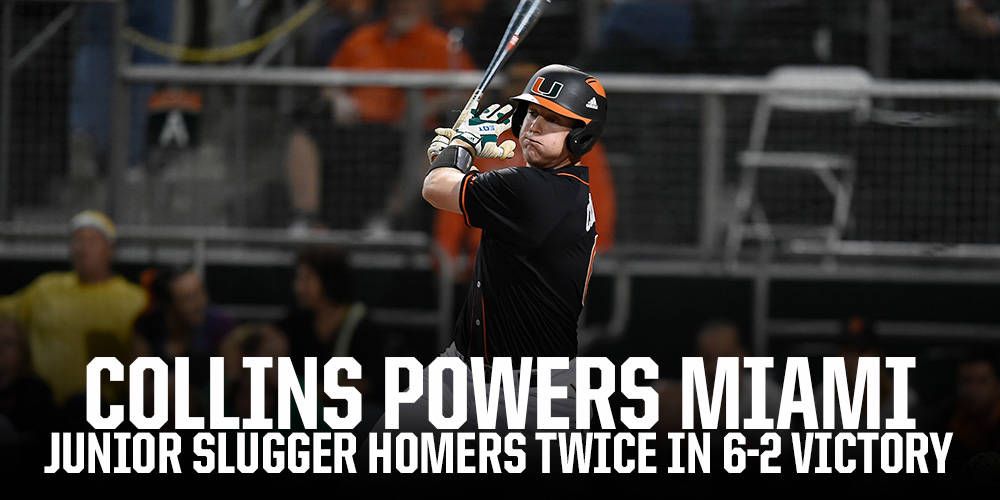 Miami improved to 14-2 in the all-time head-to-head series with the win over the Eagles, who were held at bay by Lepore (1-0).

The sophomore righthander, who struggled in his first start last Wednesday against St. Thomas, struck out a career-high seven batters in 5.2 innings – also a personal-best – to pick up the first win of his career.

“It felt great, finally getting that one off [my back],” Lepore said. “Everything kind of clicked today. Still not the best outing, but I’m definitely looking forward to working forward from here.”

The only blemish of the night for Lepore was a two-run home run by Tyler Selesky in the second inning.

“This game starts with pitching, and Jesse had his first career win,” head coach Jim Morris said. “He pitched very well. It was his best outing as a Hurricane. The big stat is no walks and seven strikeouts. He was very solid on the mound.”

The Beverly Hills, Fla., native did not walk a batter and needed just 90 pitches after struggling with a high early pitch count. He said that, despite not pitching Tuesday, the team’s trip to Jupiter for an exhibition with Miami Marlins was helpful in his preparation.

“Me and [pitching coach] J.D. [Arteaga] made a few adjustments. Watching the Marlins pitchers yesterday gave me some insight on what to do, and I made good adjustments. I felt confident in all my pitches today.”

The bullpen retired 10 batters in a row once Bartow entered with runners on first and second in the sixth.

Miami got all the offense it needed from Collins, a unanimous Preseason All-America and Golden Spikes Award candidate entering the season. The multi-home run effort was the fourth such game for Collins, who gave Miami leads of 1-0 and 3-2

“Same approach – just trying to hit the ball hard. The wind was blowing a little out today, so I got lucky,” Collins said.

Sophomore Carl Chester tied a career high with three hits (3-for-4), as the Hurricanes outhit the Eagles 10-6.

Collins wasted little time in making an impact Wednesday. The junior slugger lifted an offering from FGCU starter Garrett Anderson deep over the left field fence for an opposite field solo shot to put Miami ahead 1-0 with two outs in the first.

With Miami trailing 2-1 after Selesky’s home run, Collins cranked another opposite-field home run – the 28th of his career – to put Miami back up 3-2.

“The big hitter of the night was Collins…but a lot of guys contributed,” Morris said. “We played good defense and we pitched well.”

From there, Miami’s bullpen took over. Bartow needed 11 pitches to get through the final out of the sixth and the full seventh, Hammond threw 13 pitches in the eighth, and Garcia struck out the side in the ninth.

Redshirt junior Edgar Michelangeli added two insurance runs in the eighth when he cracked a two-run double into the left field corner.

Miami returns to Alex Rodriguez Park at Mark Light Field Friday for its series opener against visiting Manhattan. First pitch for the contest, slated for broadcast on ESPN3 and WatchESPN, is set for 7 p.m.