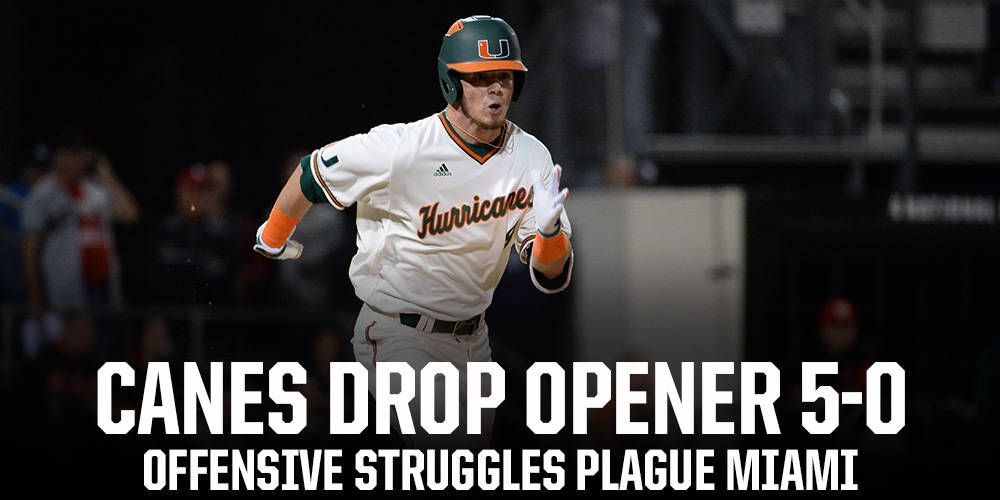 Baseball Drops Game 1 to #1 Florida at The Light

The Hurricanes struggled to get much going offensively against Florida righthander Logan Shore, who tossed a complete-game, four-hit shutout.

It was the Gators (6-0) who struck first Friday night, as a two-run home from Peter Alonso cleared the fence in left to give the visitors a 2-0 lead in the game’s first inning.

Senior lefthander Thomas Woodrey quickly worked through the second and third innings, but Florida added a pair in the fourth on a flared two-RBI single from Deacon Liput.

Woodrey (1-1) nearly escaped the inning unharmed after allowing the first two Gators batters to reach. A sacrifice bunt from Jeremy Vasquez moved both runners into scoring position, and Woodrey then induced a shallow popout to right from Mike Rivera that did not score a run.

But Liput’s single found a hole in shallow right to double Florida’s lead from 2-0 to 4-0.

The Gators added a run in the sixth on a solo home run from JJ Schwarz.

The Hurricanes (4-1) did not record their first hit off Shore until the fourth, when sophomore Carl Chester opened the inning with a double and junior Christopher Barr followed with a single. But two flyball outs and a pickoff later, Miami’s offense came up empty.

Chester reached base four times and finished the night 3-for-3.

Shore (2-0) needed 97 pithes to get through nine complete innings, and did not walk a batter. He struck out eight and surrendered just four hits.

Miami righthander Jesse Lepore, who started Wednesday’s game against St. Thomas, entered in relief of Woodrey in the sixth and pitched his way out of a bases-loaded jam.

The Hurricanes return to Alex Rodriguez Park at Mark Light Field Saturday for Game 2 of the series with Florida. First pitch for the contest, scheduled for broadcast on ESPN3 and 560 WQAM, is set for 7 p.m.