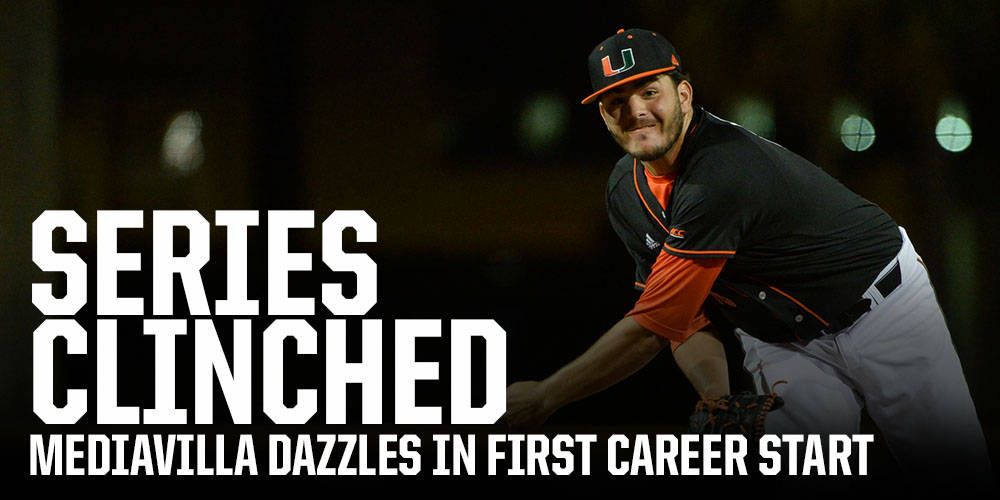 CORAL GABLES, Fla. – If Saturday night’s performance is any indication, the decision to transition lefthander Michael Mediavilla to the starting rotation could be a difference-maker for the Miami Hurricanes in 2016.

A Louisville Slugger Freshman All-America out of the bullpen a season ago, Mediavilla dazzled through six innings in a 2-0, series-clinching victory over Rutgers at Mark Light Field.

Making the first start of his Hurricanes career, the Hialeah native allowed four total baserunners on the night, and just one Scarlet Knight reached as far as second base – in the game’s first inning.

“It felt great. Just going out there today and starting has been a dream since I was a little kid,” Mediavilla said. “It was a humbling feeling when I out there and got the job done.”

Mediavilla struck out seven batters and needed just 88 pitches to get through the highly efficient outing. He did not walk a batter and surrendered three hits – all singles.

“Starting the game, I felt very comfortable with my curveball, which helped me out a lot,” Mediavilla said. “As the game went on, I felt I had my changeup working and had both pitches going…I established them at a great time in the third inning, and I cruised from then.”

Taking Mediavilla’s place in the pen for the first two games this season has been freshman Frankie Bartow, and he delivered once again. After pitching two scoreless innings in his debut Friday, Bartow stranded a Rutgers baserunner at third with an inning-ending strikeout to maintain Miami’s lead in the seventh.

Juniors Cooper Hammond and Bryan Garcia combined for two perfect innings over the eighth and ninth, with Garcia picking up his second save of the year.

“It was a great game for us. Mediavilla pitched outstanding, needless to say,” head coach Jim Morris said. “But we played really good defense and executed in some situations.”

Rutgers redshirt junior Kyle Driscoll matched Mediavilla early, delivering an effective outing in his first start of the year. He struck out four batters and allowed just one run in 5.0 innings.

Driscoll (0-1), who issued two-out walks to juniors Zack Collins and Jacob Heyward in the first inning, escaped any early damage and allowed just two singles from then until the fifth inning.

“[Driscoll] obviously pitched well tonight, too,” Collins said. “He was throwing a lot of 3-1 [count] sliders and throwing everything for strikes. It was pretty tough to hit him tonight.”

On a night when Miami’s offense totaled just six hits, Collins reached base in all four plate appearances on three walks and a single.

The Hurricanes (2-0) finally broke through in the fifth, when freshman Romy Gonzalez jumpstarted the offense with a double into the left field corner.

After a perfect sacrifice bunt from Randy Batista moved Gonzalez to third, an RBI single from sophomore Carl Chester lined into center put Miami ahead 1-0.

The double was the second in as many nights for Gonzalez.

“That was huge. We weren’t going too hot right there, so him starting the inning like that was big for us,” Collins said.

That was more than enough for Mediavilla, who was overpowering in his sixth and final inning. He recorded back-to-back strikeouts of R.J. Devish and Tom Marcinczyk to end his outing, but was hoping for one more inning when Miami’s coaches decided 88 pitches was enough.

“I didn’t want to get out,” Mediavilla said. “I had the adrenaline pumping, and I wanted to stay in.”

Collins was behind the plate for Mediavilla’s first start and said the southpaw’s ceiling is even higher than what was displayed Saturday.

“He pitched great tonight,” Collins said. “Nowhere near as good as he can be, but he did a great job. It was a game of adjustments for him, because he was used to coming out of the bullpen.”

The Hurricanes added an insurance run when junior Johnny Ruiz connected on an RBI single through the left side in the eighth inning. A miscue from Rutgers outfielder Jawuan Harris, who dropped a routine flyball from Jacob Heyward in center, keyed the insurance run.

“I thought we played solid. I would have liked to have seen us score a few more runs. But [Driscoll] has good stuff, and he threw it over the plate.”

Hammond and Garcia combined to strike out four batters over the final two innings.

Miami goes for the sweep of Rutgers Sunday. First pitch for the game, slated for broadcast on ESPN3 and 560 WQAM, is set for 12 p.m. from Mark Light Field.