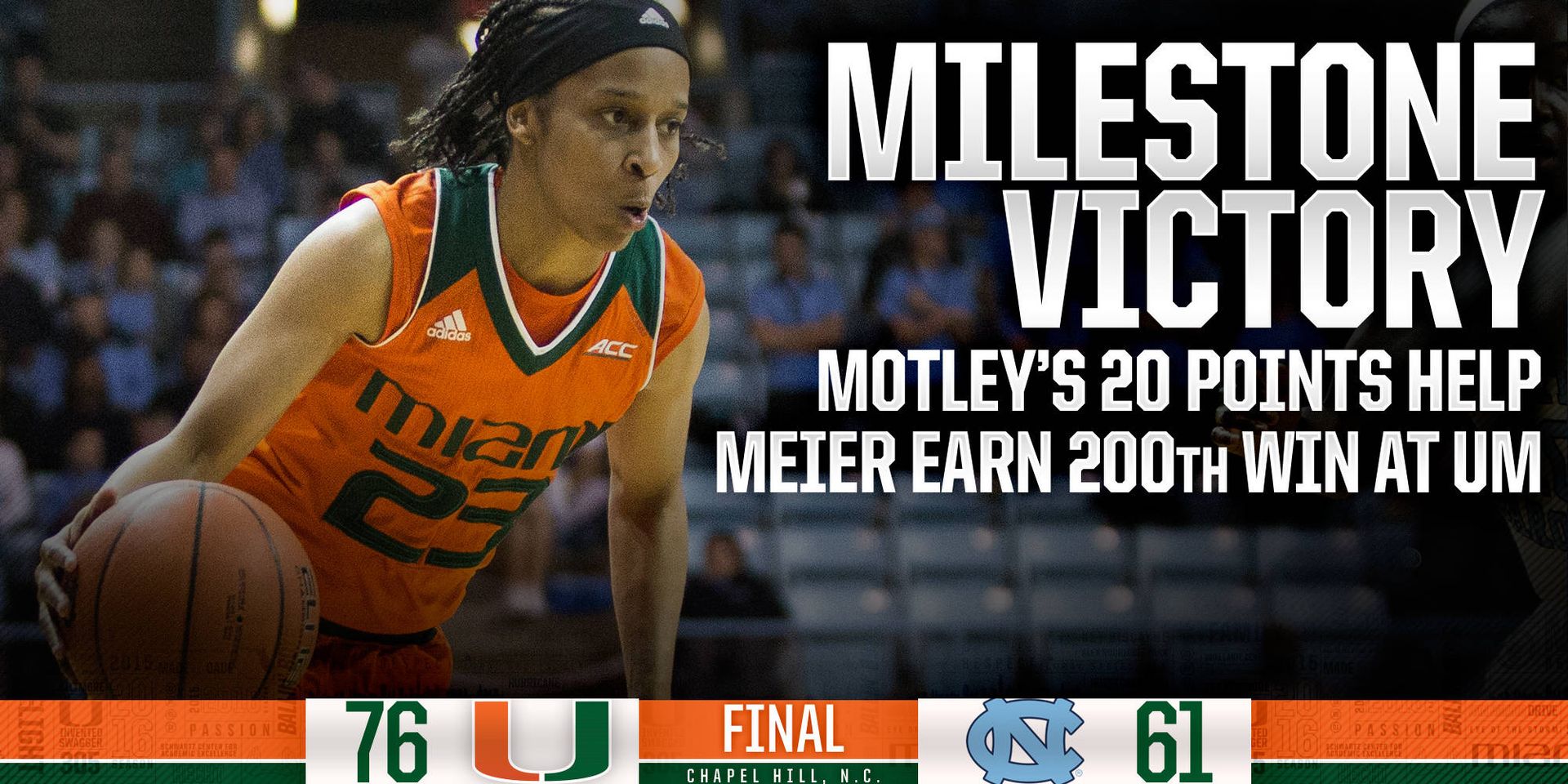 “I love Miami and I love the support that I get from the administration,” Meier said. “It’s something where I feel like I’m supposed to win 200 if I’ve been here 11 years. So, I’m glad I could do that for the University.”

Both teams shot over 46 percent from the field in a back-and-forth first period. Miami scored eight of the final 12 points of the frame, with six coming from Motley, and the Hurricanes took a 21-18 lead through 10 minutes of action.

With the score even at 26 with 6:16 left before the intermission, Miami mounted a 15-6 run to grab its largest lead of the first half, nine points. The stretch included 3-pointers by Motley, Cornelius and junior guard Jessica Thomas. It was Thomas’ shot from beyond the arc that made it 41-32 with 1:19 left in the half and drew a North Carolina (12-8, 2-3 ACC) timeout.

After the Tar Heels scored the final three points of the frame, Miami took a 41-35 lead into the locker room. The Hurricanes shot 6-of-14 (42.9 percent) from 3-point range in the first 20 minutes, while North Carolina was 2-of-10 (20.0 percent) from long range. Motley led all scorers with a dozen points at the intermission.

North Carolina opened the second half on a 6-0 run to even the score at 41, but Thomas immediately answered with her third 3-pointer of the afternoon. That shot jumpstarted an 11-2 run to put Miami ahead nine, 52-43, with 4:02 left on the third period clock. The Hurricanes’ margin would remain at nine, 59-50, entering the fourth quarter.

Following a layup by North Carolina to open the final period, Miami scored seven-consecutive points to grab a 14-point advantage, 66-52, with 5:58 to play. Freshman forward/center Emese Hof scored the first basket of the run, then assisted on the next two, a 3-pointer by Cornelius and a jump shot by redshirt junior forward Keyona Hayes.

The Hurricanes continued to extend their lead from there, turning the spurt into a 15-3 run to go ahead 74-55 with 2:48 to play. The 19-point lead was Miami’s largest of the game, en route to the 15-point victory.

“I just thought we executed the plays and the players made the extra passes. Carolina was a little bit worn down and the pass is obviously faster than the dribble and we went to that,” Meier said of the fourth period surge. “Our time per touch is a big thing in our program—no one should eat the ball—and we shrunk our time per touch, trusted each other a little bit more and it opened up everything for us.”

In addition to Motley and Cornelius, both Thomas and Hof finished with double figures. Thomas scored 13 points to go along with four assists, while Hof added 10 points on 5-of-5 shooting from the floor. The Hurricane bench outscored that of North Carolina, 24-0.

Miami finished the game with 21 assists and 11 turnovers, and also held an 11-2 edge in second chance points.

After a midweek bye, the Hurricanes will be back on the court Sunday at 1 p.m. when they host No. 16/14 Florida State at the BankUnited Center in Coral Gables, Fla.

·         For the eighth game in a row, Miami’s starting lineup was Hayes, Hof, Motley, Thomas and Michelle Woods.

·         The all-time series between the Hurricanes and Tar Heels moved to 13-7 in favor of North Carolina. Miami has a 5-4 edge in the last nine meetings.

·         Cornelius, who moved past 100 field goals attempted in her career, had the fifth double-digit scoring game of her career. Three of them have come in ACC play.

·         Hof’s double-digit outing was the seventh of her career and her first in ACC action.