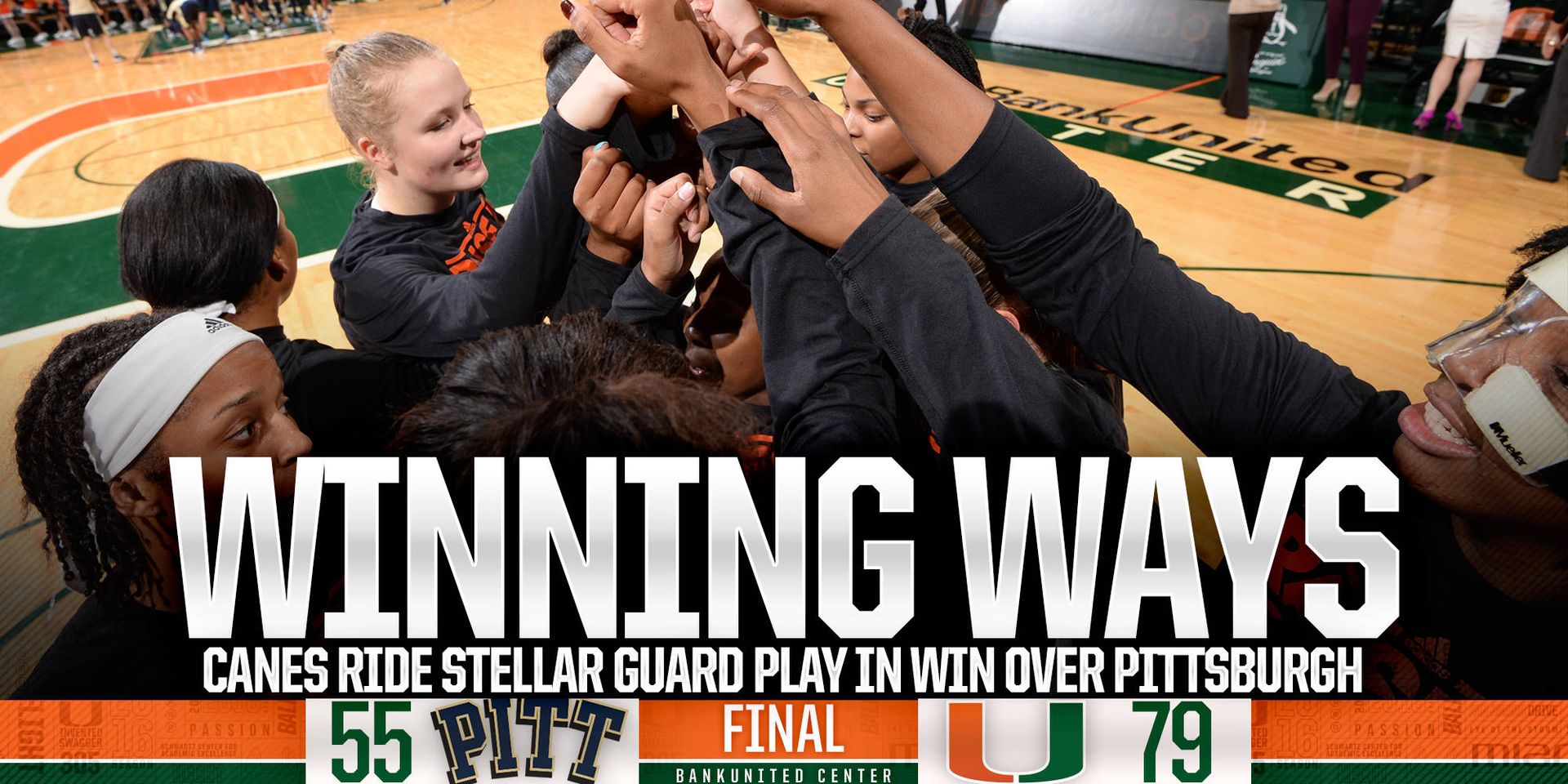 CORAL GABLES, Fla. – The University of Miami women’s basketball team got back in the win column Thursday night at the BankUnited Center, rolling past Pittsburgh, 79-55.

Junior guard Adrienne Motley scored 20 points on 8-of-11 shooting (72.7 percent) and Michelle Woods nearly recorded a triple-double in the win. The redshirt senior finished with 11 points, a co-game-high nine rebounds and a game- and career-high nine assists.

“Chelle is just a problem-solver. We talk about feeding each other and having spoons that are too long to feed yourself. So, go across the table and feed your teammate,” Miami head coach Katie Meier said. “She was doing that all night, just feeding and feeding. She had real positive energy, was really caring about other people and making the right basketball play.”

The Hurricanes forced Pittsburgh (8-7, 0-2 ACC) into seven turnovers in the first period and took a 13-12 lead after 10 minutes of action.

Miami opened the second quarter on a 10-0 run that included a pair of 3-pointers by Motley. The Hurricanes made four-straight field goals during the run and held the Panthers scoreless for the first three minutes and six seconds of the second session, grabbing a 23-12 lead.

Overall, the Hurricanes outscored Pittsburgh 24-10 in the second quarter and led by 15, 37-22, at the break. Motley capped the frame with a jump shot just seconds before the buzzer and led all scorers at halftime with 12 points on 5-of-8 shooting from the field and 2-of-2 at the line. Woods had seven assists in the first 20 minutes, tying her career high for a full game.

Miami’s offense continued to click in the third period and the Hurricanes extended their lead to 25 on multiple occasions. After Pittsburgh trimmed it back down to 20, Miami ended the session on a 9-0 run that ended with a layup by freshman forward/center Emese Hof with just two seconds on the clock. The 29-point lead, 66-37, was Miami’s largest of the game to that point.

In the final session, the Hurricanes continued to build that advantage and led by as much as 33, en route to their 14th victory of the season. Miami moved to 10-0 at home on the year with the 24-point win.

“We’ll win a lot of games overall if we’re shooting that percentage,” Meier said, “but we’ll lose a lot if we keep turning it over. We’re just about there on our offense in terms of our flow and our early looks.”

In addition to the strong the performances by Motley, who was 4-of-4 from 3-point range, and Woods, redshirt junior forward Keyona Hayes was superb in the frontcourt for Miami. She set a season high with 15 points and made all seven of her field goal attempts.

The Hurricanes quadrupled Pittsburgh in fast break points, leading 24-6, and also had an 18-8 edge in second chance points.

Miami will continue its ACC slate this weekend when it travels to Clemson, S.C., to face the Tigers Sunday at 4 p.m. at Jervey Gym.

To stay updated on the University of Miami women’s basketball team throughout the season, follow @CanesWBB.

·         Woods has nine-plusrebounds in two of the last four games after never recording nine in a game previously.

·         Additionally, Motley tied her season best with three steals (previously recorded multiple times, most recently at Charlotte, 11/23/15). Her four 3-pointers made also matched her most in ACC play (previously at Wake Forest, 2/26/15).