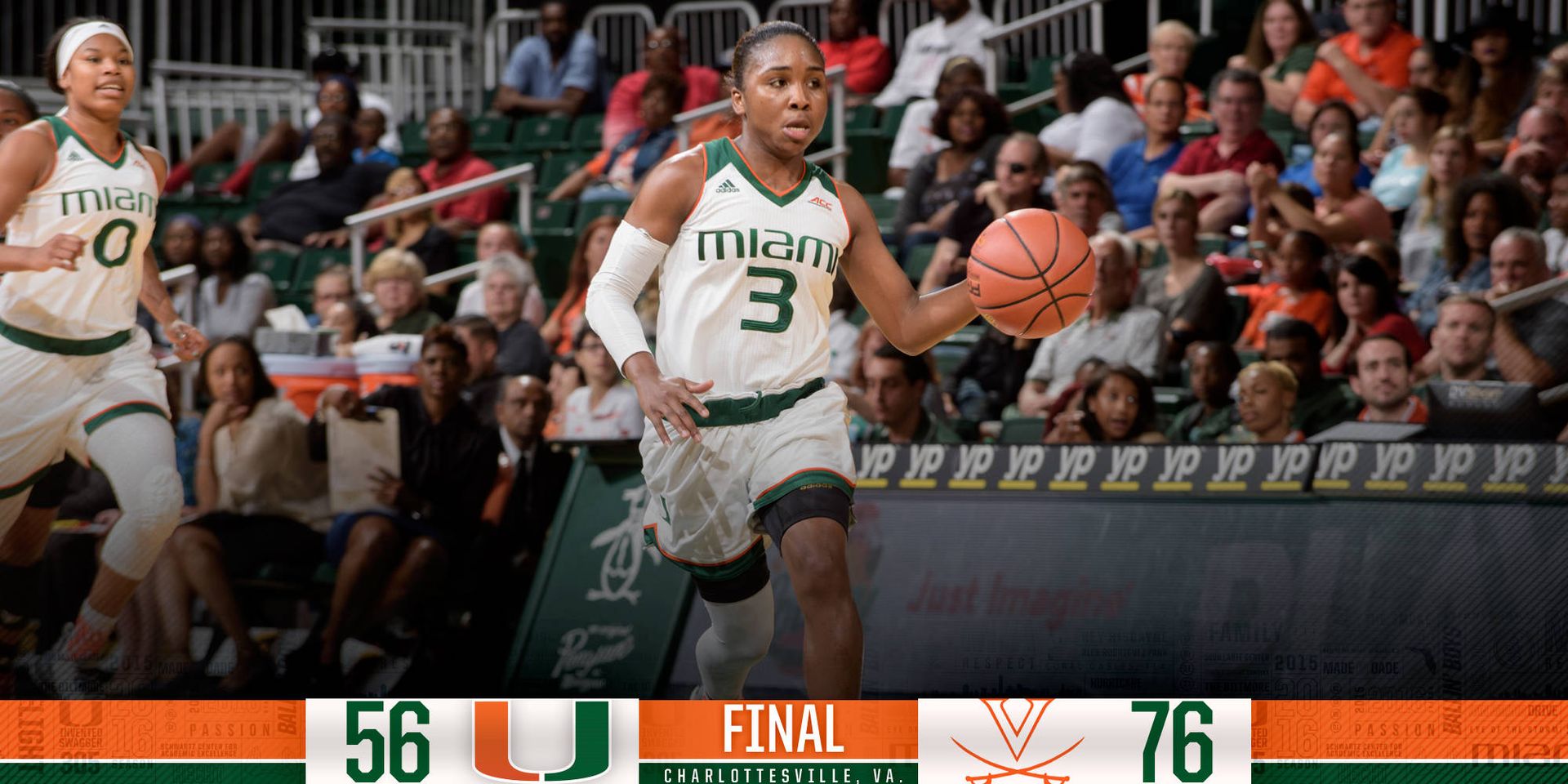 “Well, we just got to mimic some of the qualities that Virginia played with,” Miami head coach Katie Meier said of what she can teach her team from this game. “They were tough, they were strong. When they made mistakes they responded with tougher defense and I just don’t feel like we did that.”

In a first quarter that included a combined 19 turnovers, freshman forward/center Emese Hof was steady down low for the Hurricanes, connecting on all three of her field goal attempts. Miami held Virginia (11-4, 1-0 ACC) scoreless for the final four minutes and six seconds of the period and trailed 12-11 after 10 minutes of action.

The Cavaliers opened the second quarter on a 12-2 run and jumped out to a 24-13 lead with 7:24 left before the intermission. Virginia would go on to outscore the Hurricanes 28-9 in the period to take a 40-20 lead at halftime.

Virginia senior guard Faith Randolph, a Preseason All-ACC selection, had 11 points in the first half to lead all scorers, while Hof had eight for Miami.

Despite nine points from redshirt junior forward Keyona Hayes in the third period, Virginia stretched its advantage to 63-32 through 30 minutes of play.

The Hurricanes competed until the final buzzer, finishing the game on a 13-5 run and making seven of their final 11 field goal attempts in the defeat.

“It wasn’t like one person had the turnover bug. The entire team had it,” Meier said. “So, you got to kind of look at your schemes and look at what Virginia was doing to us defensively. We tried to change our offensive schemes and we stopped turning it over, but we weren’t scoring. We rely on three guards [Thomas, Adrienne Motley and Michelle Woods] who attack very, very well and Virginia neutralized them and turned them over quite a bit.”

Hayes and sophomore forward/center Erykah Davenport both finished with nine points and scored all of their points in the second half.

The Hurricanes now return home to Coral Gables, Fla., to face Pittsburgh Thursday at 7 p.m. at the BankUnited Center.

·         The all-time time series between Miami and Virginia is now 9-7 in favor of the Cavaliers. Prior to today, Miami had won six of the past seven meetings, including each of the last three.

·         This was the Hurricanes’ first loss of the season when trailing by 11-plus points at any time in the game, as Miami had won the first four times that happened.

·         This was just the fourth time in 15 games this season the Hurricanes have allowed 70-plus points.

·         Miami had a player foul out for just the second time this season, as Erykah Davenport picked up her fifth foul with 2:44 remaining in the game. Previously, Hof fouled out against Illinois (12/2/15).

·         In three of her four starts this season, Hof has scored Miami’s first points.

·         Keyanna Harris’ two steals equaled her career best (previously recorded multiple times, most recently vs. Wisconsin, 12/4/14). It is her first multi-steal game this season and the first of her career in ACC play.