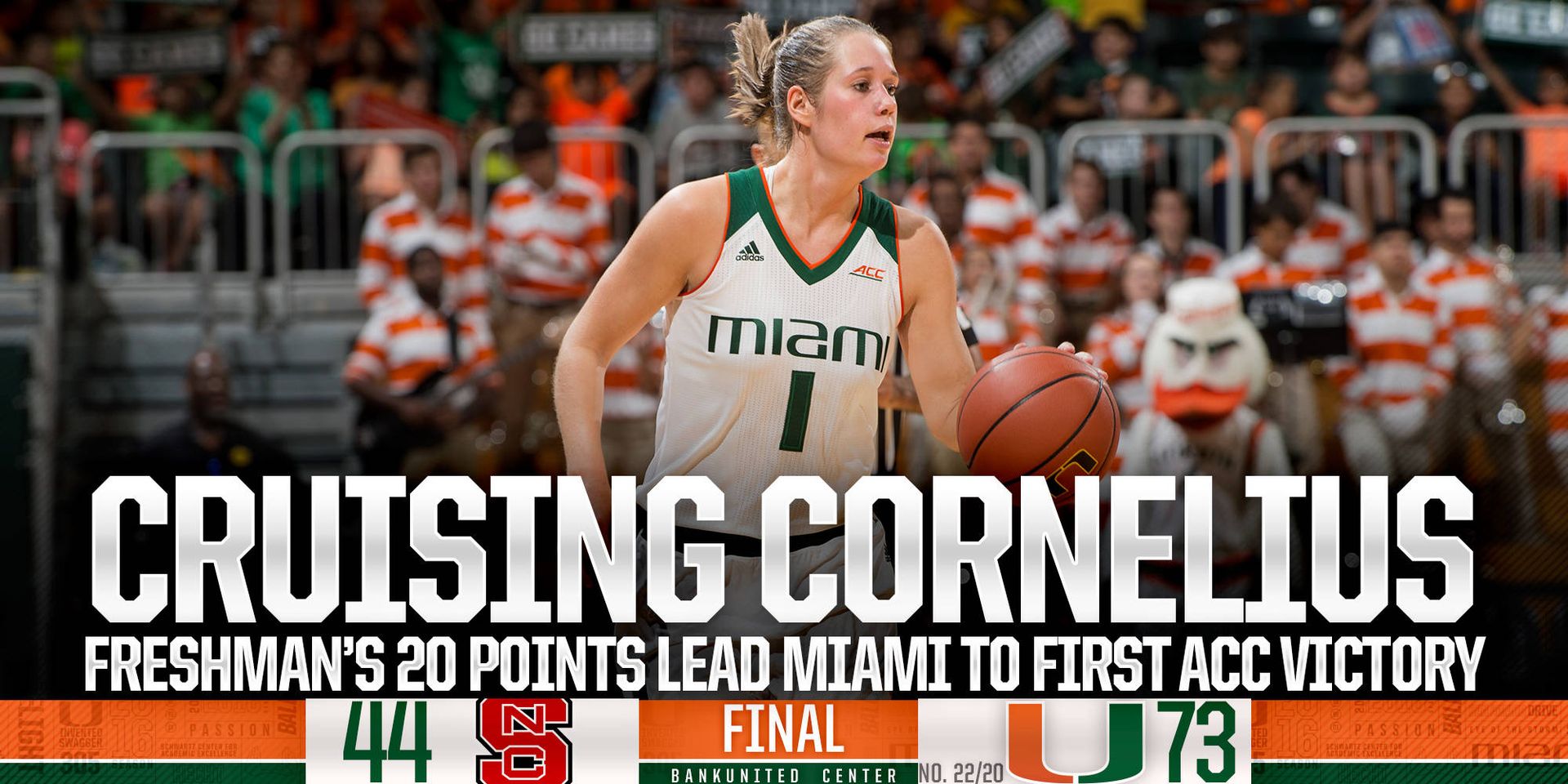 Led by a career-high 20 points by freshman guard Laura Cornelius, who connected on all six of her 3-point attempts, No. 22/20 Miami (13-1, 1-0 ACC) won its ACC opener for the fourth-straight season and trailed for just 12 seconds.

Cornelius became the first Hurricane ever to go 6-of-6 from beyond the arc and the eighth to make six-plus 3-pointers in a contest. It is the 16th time total a Hurricane has hit at least a half dozen shots from long range in a game.

“She’s just a great spirit, such a great person. When good things happen to good people, everybody celebrates and I think she really, really lifted our team tonight,” Miami head coach Katie Meier said of Cornelius. “Both her and Emese Hof sacrificed a lot to come here because they wanted to play in this conference. So to see her just jubilant on the court makes me happy. It makes everybody happy because she works so hard on her game. We need her. She’s a big time player.”

Miami jumped out to a 17-8 lead through one quarter of play after closing the period on an 8-0 run over the final three minutes and six minutes. After the Wolfpack made their first shot of the game, Miami limited them to just two makes on their next 17 attempts, a stretch that went into the early second period.

After hitting a 3-pointer during Miami’s run to close the opening period, Cornelius connected on two more in the first two minutes of the second session. Her hot shooting helped Miami stretch its lead to as much as 17 in a second quarter during which seven different Hurricanes scored.

Sophomore forward Khaila Prather capped the first half with a pair of free throws with half a second on the clock to make it 38-23 at halftime. It marked the 12th-straight meeting in which Miami led the Wolfpack at the break, including the eighth-straight by double figures.

As was the case in the previous period, seven Hurricanes scored during the third quarter as Miami ran out to a 25-point lead, 61-36, through 30 minutes of action.

After the Hurricanes closing the third period with seven-straight points, Cornelius opened the final session by knocking down one of her career-best six 3-pointers to make it a 10-0 run and put Miami up by 28.

Miami’s eventual 29-point margin of victory was its biggest lead of the game. It also matched the Hurricanes’ largest win in ACC play since a 79-42 victory over Clemson on Jan. 15, 2015, nearly a full year ago.

“It’s a whole different level,” Meier said of ACC play and the team’s strong start. “A different level of focus is required when you come off break and you’ve got to get them back. We were playing so well. I thought that Laura Cornelius was absolutely the show, but somebody like Khaila Prather, she’s such an ACC player. She helps you win ACC games and that’s the first person I talked about in the locker room.”

Miami is set to begin its conference road slate Sunday when it faces Virginia at 1 p.m. at John Paul Jones Arena in Charlottesville, Va.

·         For the third game in a row, Miami’s starting five was Keyona Hayes, Hof, Adrienne Motley, Thomas and Woods.

·         The all-time time series between Miami and NC State is now 10-9 in favor of the Wolfpack. The Hurricanes have won nine of the last 11 meetings, including eight of the past nine and six in a row at home.

·         The Hurricanes held NC State to just eight points in both the first period and the fourth period.

·         The Hurricanes’ 14 made free throws tied their season best (previous vs. Coppin State, 12/4/15) and their 21 attempts were the team’s second-most this season behind only the same Coppin State game.

·         This was the third double-digit scoring game of Cornelius’ career.

·         Cornelius attempted and made the first two free throws of her collegiate career. Additionally, she surpassed 50 field goal attempts as a Hurricane.

·         Woods has now scored double figures in three of the last four games and six times overall this season.

·         Prather equaled her career best with three made free throws (previously recorded multiple times, most recently vs. FIU, 12/22/15). It is the first time in her career she has made three free throws in an ACC game.

·         Zada Williams logged the first blocked shot of her career.