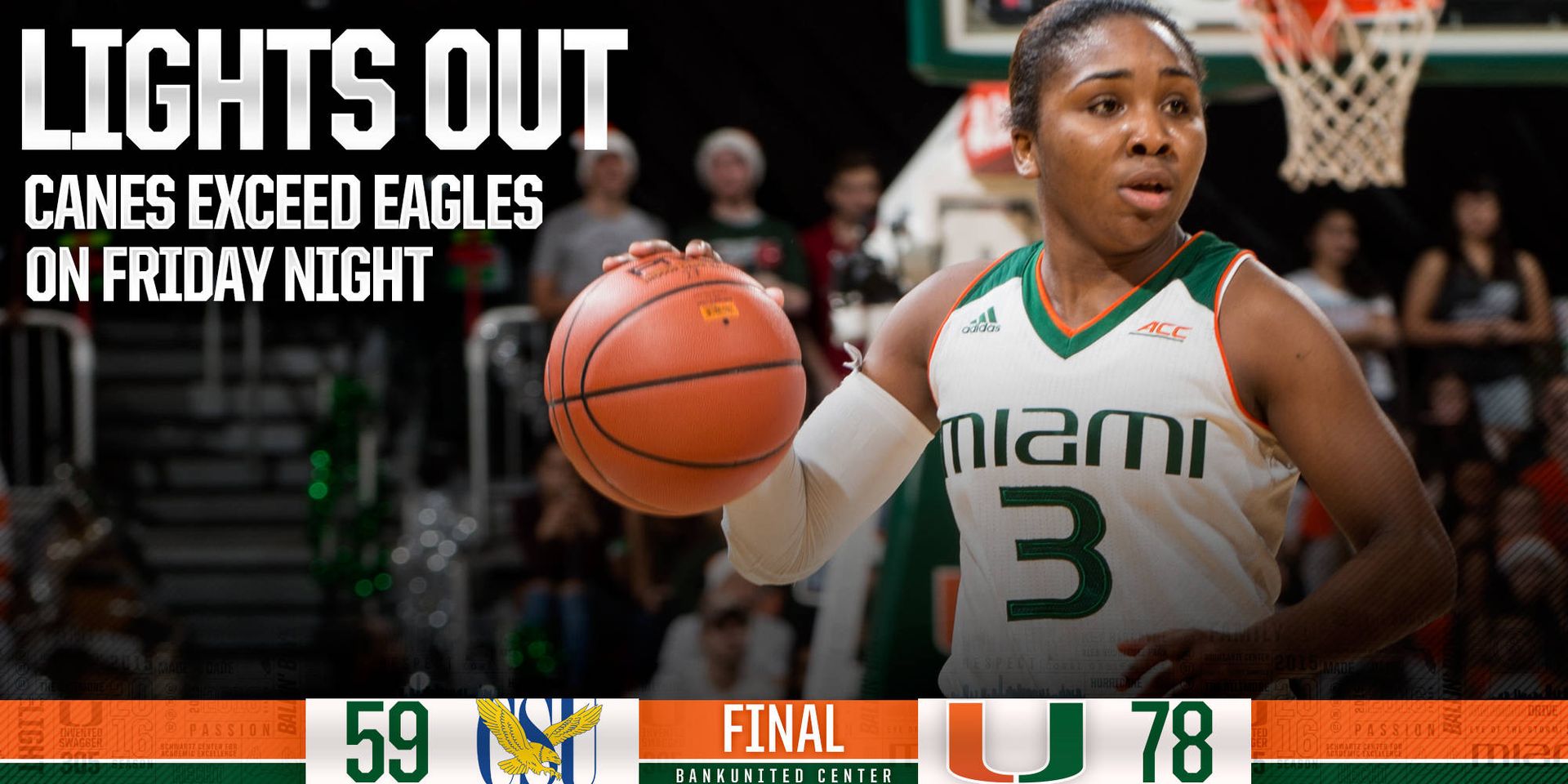 CORAL GABLES, Fla. – The University of Miami women’s basketball team led wire-to-wire in its victory over Coppin State Friday night at the BankUnited Center, rolling to a 78-59 win.

Junior guard Jessica Thomas set the tone for the game by hitting a 3-pointer just nine seconds in, giving Miami (9-0) a lead it would not relinquish. Thomas would go on to finish with a game-high 16 points, helping the Hurricanes become the first 9-0 team in the country.

“She’s just great. She’s our motor, there’s no question,” Miami head coach Katie Meier said of Thomas, a team co-captain. “She’s a great competitor and she’s very proud to wear Miami on her chest. So, in games like that where things get a little bit sloppy, she’s the first to react. She is the first to kind of address it and demand more from her teammates. Thank God we had that mentality tonight from her.”

Miami jumped out to an 8-0 lead in the first two and half minutes and never looked back. The Hurricanes led Coppin State (2-5) by seven, 19-12, after one period of play, following a buzzer beater by Eagles sophomore forward Candice Beverly.

The Hurricanes stretched their lead up to as much as 14 in the second period and took a 10-point advantage, 37-27, into the locker room at halftime. Thomas had eight points and four assists in the opening 20 minutes, while sophomore forward/center Erykah Davenport added seven points, more than she logged in all but three of the first eight full games.

A 3-pointer by redshirt sophomore guard Nigia Greene with 9:22 remaining in the contest gave Miami its first 20-point lead at 61-41. The Hurricanes’ lead did not drop below 15 at any point in the final session and the team reached the 70-point mark for the seventh time in nine outings this season.

“Every time, we’re all about the quality of the product. We’ve had some quality wins where we’ve played quality basketball and tonight we were able to get away with getting a win and not playing to our quality, but I do want to give Coppin State the credit,” Meier said of the team’s 9-0 start. “We’ve been on the road and we’ve won. We’ve been down and we’ve won. We’ve been up and been challenged back and we’ve won. The bottom line is at the end of the night we’ve been winning. We do have a great group of competitors in that locker room and we have won in nine different ways and so I am excited about that.”

The Hurricanes’ bench doubled up that of Coppin State, concluding the game with a 34-17 edge.

Miami will conclude its five-game homestand Sunday at 1 p.m. when it faces UMass Lowell at the BankUnited Center. It will be the team’s final home game until taking on FIU Dec. 22.

To stay updated on the University of Miami women’s basketball team during the 2015-16 season,, follow @CanesWBB.

·         As has been the case in all nine games this season, Miami’s starting five was Davenport, Hayes, Adrienne Motley, Thomas and Michelle Woods.

·         Miami now has a 3-0 lead in the all-time series against Coppin State, winning in each of the last three seasons.

·         The Hurricanes entered the day as one of just 21 remaining unbeaten teams in Division I.

·         This was the sixth time in nine games Miami conceded fewer than 30 points in the first half, including the third time in the last four contests.

·         Davenport scored in double figures for the third time this season, and the second time in the last three games, after doing so twice in her freshman campaign.

·         Keyanna Harris has scored double digits in two of the past five games after not doing so at all in the first 27 appearances of her career.

·         Additionally, Harris has logged three-plus rebounds in three of the past five games after never previously doing so.

·         In the first period alone, Khaila Prather tied her career highs in free throws made (three) and attempted (four). She previously made three vs. North Florida (11/21/14) and attempted four multiple times, most recently vs. Washington (3/20/15).