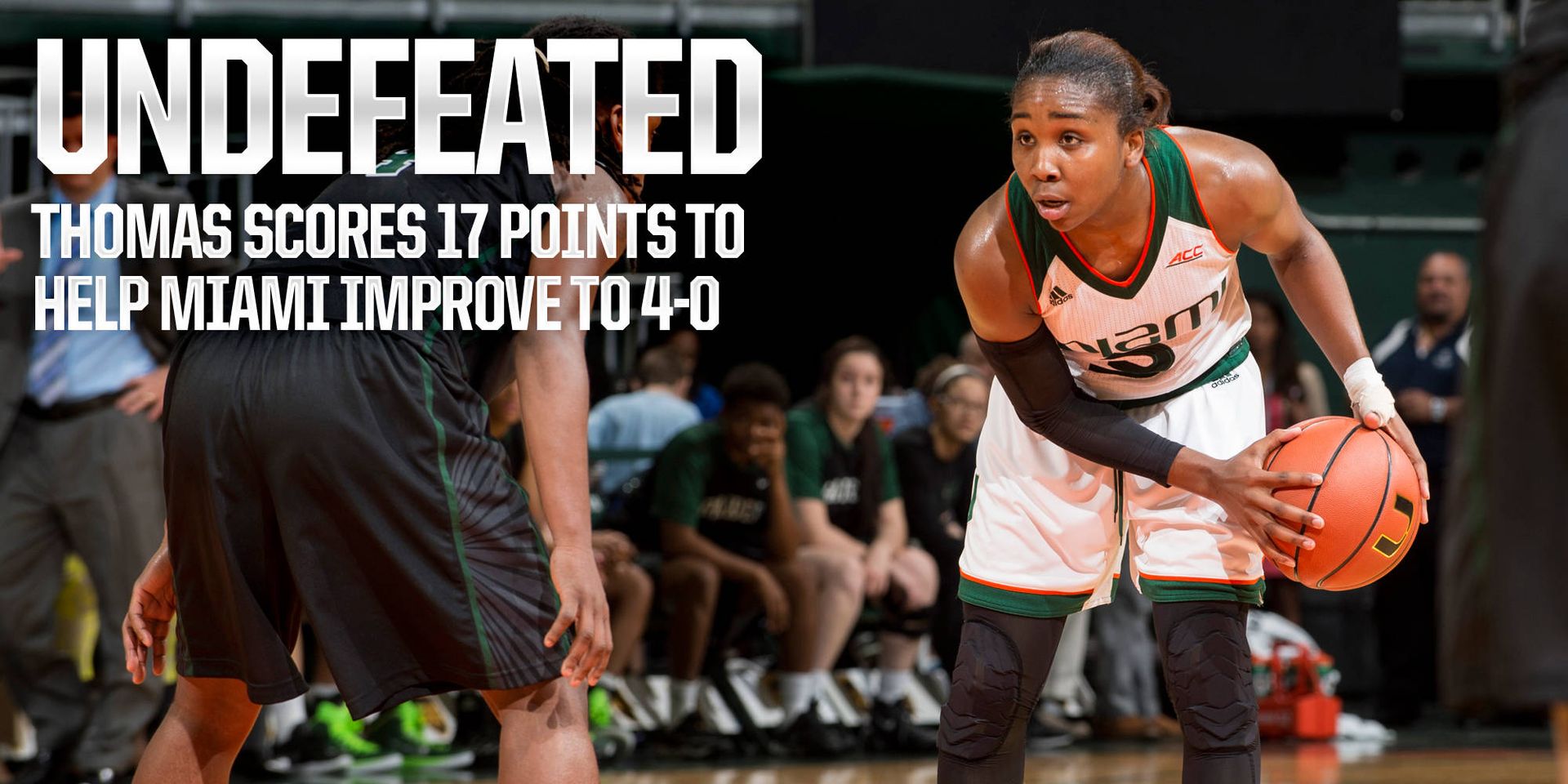 Junior guards Adrienne Motley and Jessica Thomas led all scorers with 17points each, while freshman forward Emese Hof added a career-high 14 points without missing a shot.

Motley scored Miami’s first seven points of the game in a slow-paced first period. A Loyola (1-2) bucket at the buzzer made it 14-11 Miami through 10 minutes.

The Hurricanes scored 10 points, all in impressive fashion, in the first 71 seconds of the second quarter to take a 24-11 lead. The run opened with Motley making a nice pass to freshman guard Laura Cornelius for a corner 3-pointer. Junior guard Jessica Thomas then made a stellar pass of her own to redshirt junior forward Keyona Hayes for a basket. Thomas followed that with a 3-pointer and then Motley scored on an acrobatic drive to the rim.

Freshman forward Emese Hof led the charge for Miami in the second half, scoring 12 points and pulling down five rebounds after the intermission. The Utrecht, Netherlands native finished the game with 14 points and seven boards, while shooting 6-of-6 from the field and 2-of-2 at the line.

The dominant play from Hof helped Miami continue to build its lead throughout the final 20 minutes until claiming the 27-point win.

Sophomore forward Erykah Davenport led the Hurricanes with nine rebounds, the second-consecutive game she has fallen just one board shy of double figures. She also logged a career-high five blocked shots, while Hayes added in three blocks of her own.

Miami will continue its road trip Monday at 7 p.m. when it faces Charlotte at Dale F. Halton Arena.

·         As has been the case in each game this season, Miami’s starting lineup was Davenport, Hayes, Motley, Thomas and Michelle Woods.

·         This was the first-ever meeting between the Hurricanes and Ramblers.

·         This is the second time in the last nine years the Hurricanes have started 4-0, joining the 2009-10 campaign in which Miami won its first seven games.

·         Redshirt sophomore guard Nigia Greene made her season debut for the Hurricanes and connected on a 3-pointer on her first shot attempt.

·         Davenport finished with nine rebounds for the second-straight game, marking the first time in her career she has had even eight in back-to-back contests.

·         Additionally, Davenport recorded multiple assists for the first time in her career.

·         Davenport is the first Hurricane with five blocks in a game since Jassany Williams did so vs. Virginia (3/5/15). Her previous career high was two, recorded multiple times (most recent at Pittsburgh, 2/1/15).

·         Thomas finished the game with five rebounds, marking the fifth time in the last 11 games dating back to last season that she had five-plus boards after doing so just twice in the first 57 games of her career.