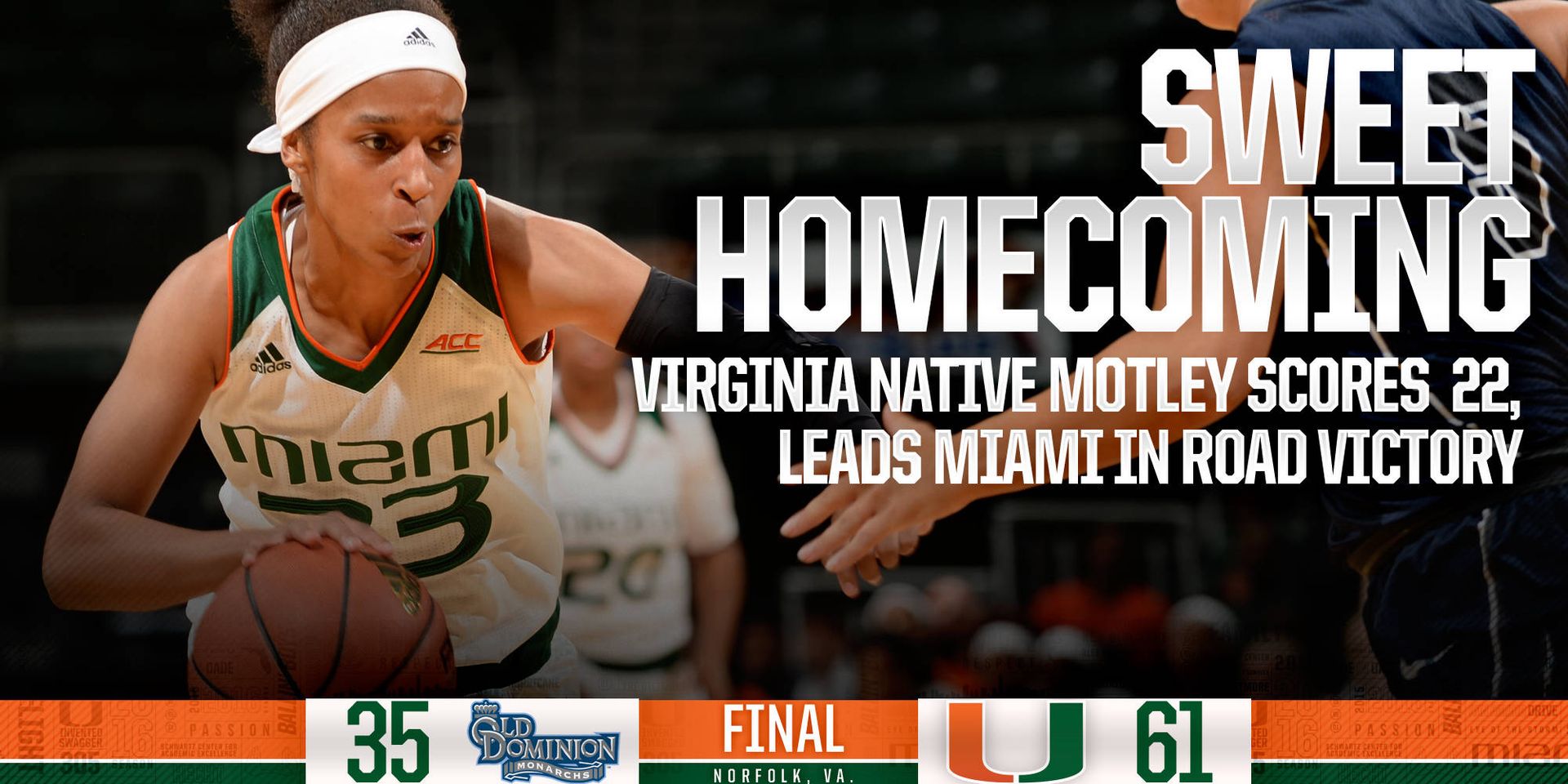 Over nearly eight minutes of play spanning the final two periods, Miami stretched its third-quarter advantage from four points to 24 points by the early stages of the fourth and final period.

Junior guard Adrienne Motley, from nearby Newport News, Va., scored a game-high 22 points on 10-of-17 shooting (58.8 percent) and Miami (3-0) won its road opener over the fourth-winningest program in NCAA Division I women’s basketball history.

“We say that there’s a difference between pressure and stress in this program. We love pressure, we want pressure and she wants the pressure,” Miami head coach Katie Meier said of Motley. “Any other kid who didn’t have the mentality that she had, I might be a little bit nervous bringing her to her hometown, but for her, I thought it was going to bring out the best in her and it absolutely did.”

The Miami defense was outstanding in the opening period, limiting Old Dominion (1-2) to just 1-of-12 shooting (8.3 percent) and forcing nine-straight misses to close the quarter.

The Hurricanes’ Dutch freshman duo of forward Emese Hof and guard Laura Cornelius each contributed on opposite ends of the floor on the final bucket of the quarter. Hof blocked a Monarch shot, grabbed the ball, keying a 3-pointer from Cornelius to make it 18-6 Miami after 10 minutes of play.

Miami’s defensive intensity continued in the second period, as the Hurricanes held the Monarchs to just 5-of-22 shooting (22.7 percent) in the first half. Motley made more field goals (six) in the first 20 minutes than she did in either of the Hurricanes’ first two games of the season.

Motley scored 12 points before the break and her layup with 6:37 left in the second period put Miami up by 17 points, 26-9. The Hurricanes would eventually take a 32-20 lead into the locker room.

Old Dominion scored the first eight points of the third quarter to trim Miami’s lead to four, 32-28, with 6:53 on the clock, making it a 19-6 Old Dominion run dating to the second period.

From there, the Hurricanes took over.

Miami went on an 18-0 run to close the period, started by a beautiful reverse layup from Cornelius and followed a 3-pointer from Motley directly in front of the Hurricanes’ bench. Miami made it 20 unanswered points on a bucket by Hof, who had eight points during the stretch, to open the final period and grabbed a 52-28 advantage with 9:21 left.

When Old Dominion finally scored to stop the Hurricanes’ charge, it had been nine minutes and three seconds of play during which Miami did not allow a single point.  The Hurricanes limited Old Dominion to just 11 made field goals in the game and the Lady Monarchs shot 23.4 percent (11-of-47).

“We had to change defenses. We had to go to a conservative defense with all of our foul trouble and this is one of those games where you’re just happy you have really reliable, quality depth,” Meier said of what changed following Old Dominion’s 8-0 run. “Not just depth, not just bodies on the bench, but people who actually can, in some areas, even make your team a little better.”

Erykah Davenport joined Motley in double figures for Miami, finishing with 10 points to go along with a team-high nine rebounds. It marked the third time the sophomore forward scored in double digits.

Redshirt junior guard Jennie Simms finished with 16 points and nine rebounds for Old Dominion, but the Hurricanes limited her to 5-of-19 shooting (26.3 percent).

Miami had a major edge around the basket in the win, outrebounding the Lady Monarchs 52-33 and leading 32-6 on points in the paint. The Hurricanes’ bench also outscored that of Old Dominion 20-2.

The Hurricanes will be hitting the road yet again this weekend when they face Loyola-Chicago Saturday at 2:30 p.m. at Gentile Arena.

·This was the first time Miami has defeated Old Dominion, moving to 1-3 in the all-time series.

·This is the second time in the last nine years the Hurricanes have started 3-0, joining the 2009-10 campaign in which Miami won its first seven games.

·Miami did not allow a single point in transition and had 14 of its own.

·Hof logged seven rebounds in the first half alone.

·Cornelius and Hof each had the most points of their young careers, with eight each.

·Hof also led all players with three steals and two blocks, after having zero steals and one block in the first two games combined.