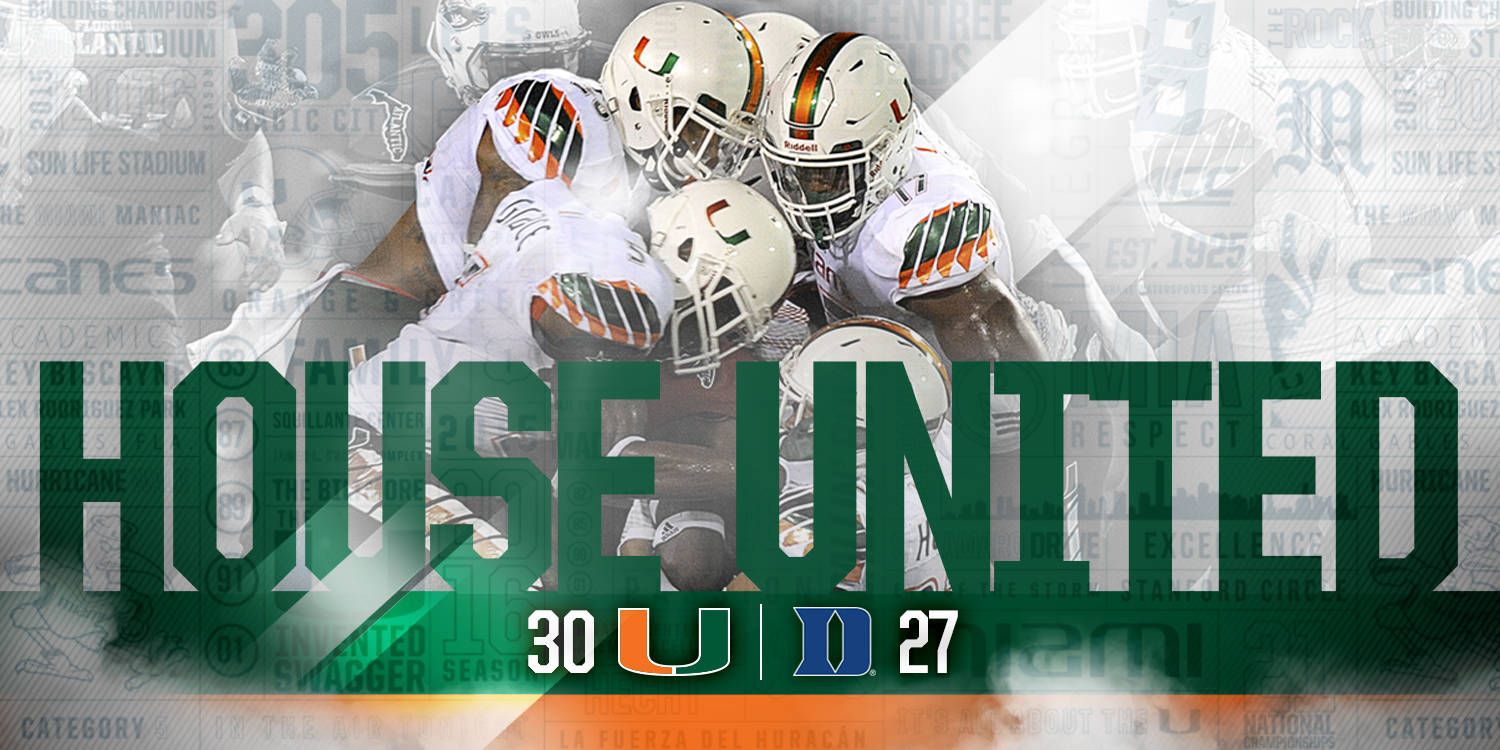 DURHAM, N.C. (AP) – The Miami players kept chucking the ball back and forth, trying to stay upright, to somehow keep the game going just long enough to make something magical happen.

And then it did.

Call it a Miami miracle. Even if it’s one that’s going to be vigorously debated for a long time.

Corn Elder took the Hurricanes’ eighth lateral of a wild final kickoff return back for a touchdown to give Miami an unbelievable 30-27 victory over No. 22 Duke on Saturday night.

Thomas Sirk seemingly had given the Blue Devils (6-2, 3-1 Atlantic Coast Conference) the win by scoring on a sneak with 6 seconds left.

But in a final sequence reminiscent of California’s unforgettable run through the Stanford band in 1982, Elder caught the last of eight laterals, and zigged and zagged through the Duke coverage team for the score.

“You know…we just wanted to keep the ball alive,” a bewildered Elder said. “You never practice these moments. We talked about it, but we never really practiced it. We had a bunch of playmakers, and we made a play.”

One problem: A penalty flag thrown on teammate Mark Walton for an illegal block in the back on Breon Borders at the Duke 25.

After a lengthy review, the officials announced that the block was to Borders’ side – not his back – and the touchdown stood.

The “did-you-see-that” finale capped a tumultuous week for the Hurricanes (5-3, 2-2). Coach Al Golden was relieved of duties after the program suffered its worst loss in school history a week ago.

Things became even more somber when the mother of cornerback Artie Burns died unexpectedly and he promised that he would play in her honor.

“We’ve been through a lot this week, and it says a lot about this team,” Elder said. “We kept fighting, kept fighting and we wanted to do this for Artie’s mom, coach Golden and the city of Miami.”

What everyone will remember is the madcap finish that lasted for 49 seconds and wasn’t completely decided until a 9-minute review.

“That was just like the old ‘hot potato’ game,” Scott said.

It started when Dallas Crawford fielded Ross Martin’s squib kick at the Miami 25-yard line and flung the ball to Elder, who ran back left before flipping to Jaquan Johnson. Johnson then lateraled to Walton, who let the ball rip as he was being tackled by Alonzo Saxton.

Johnson grabbed it, then flung it to Tyre Brady, who threw it to Elder, who chucked it to Crawford at about the 3. Crawford brought it forward some 10 yards before tossing it back to Elder at the 8.

Elder took it down the left sideline before cutting back at the Duke 40, then running down the middle of the field and into the end zone, where he was finally tackled by teammate Lawrence Cager and, then, the rest of the Hurricanes.

But in the background loomed that yellow flag – which would have been the 24th of the game for Miami and would have added to a school record.

There was plenty for the replay officials to sort out – chiefly, if Walton got rid of the ball before his knee hit the ground. Almost instantly, screen grabs emerged on social media appearing to show Walton was down as fans picked the play apart.

But after the long wait, referee Jerry Magallanes had told a crowd waiting in suspense that no Miami runner had a knee down, then said the block in question came from the side, not the back.

It was confirmed. The chaos was enough to win the game.