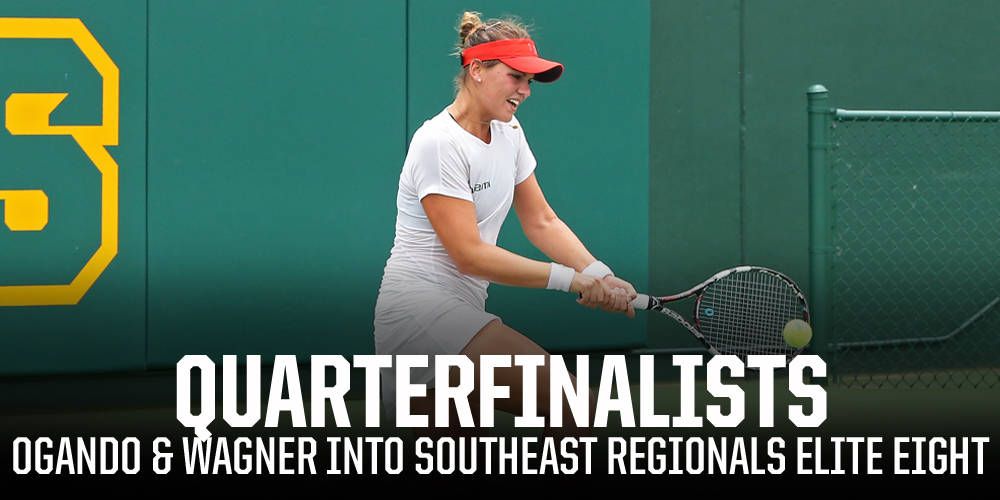 ATHENS, Ga. – Yolimar Ogando and Stephanie Wagner of the University of Miami women’s tennis team both advanced to the quarterfinals of the USTA/ITA Southeast Regionals singles main draw Saturday.

Sophomore Silvia Fuentes also picked up a pair of victories in the singles consolation draw at the Dan Magill Tennis Complex. She opened her day with a tight 7-6 (7-3), 6-3 win against North Florida’s Noemi Hemmerich. She then topped Kennesaw State’s Alexandra Mercado, 6-1, 6-0, to reach the consolation quarterfinals.

All three Hurricanes will resume play Sunday at 10 a.m. In the main draw, Ogando will face Florida’s Kourtney Keegan, who is ranked No. 38 and seeded No. 9-16, while Wagner will meet Anna Danilina of the Gators. Fuentes is set to take on Georgia State’s Kristin Rehse of Georgia State in the consolation draw.

“Lohan played with a lot of heart today,” Yaroshuk-Tews said of the sophomore’s first loss to a non-top-10 player this fall. “She was able to turn the match in her favor and change the momentum, but her opponent made some aggressive moves late in the match and Lohan didn’t respond tactically. High-quality match from both players and we just came up a little short.”

Miami dropped all three of its doubles main draw round of 16 matches Saturday. Wagner and freshman Clara Tanielian fell 2-8 to Georgia’s Caroline Brinson and Hannah King, ranked No. 51 and seeded fifth. Zhang and senior Clementina Riobueno, ranked No. 50 and seeded fourth, suffered a 6-8 defeat to Florida’s Danilina and Morgan.

Lohan and freshman Ana Madcur came up just short in a thrilling match against Georgia’s Silvia Garcia and Kennedy Shaffer, who are ranked No. 16 and seeded third. The Bulldogs came away with a 9-8 (9-7) win on their home court.