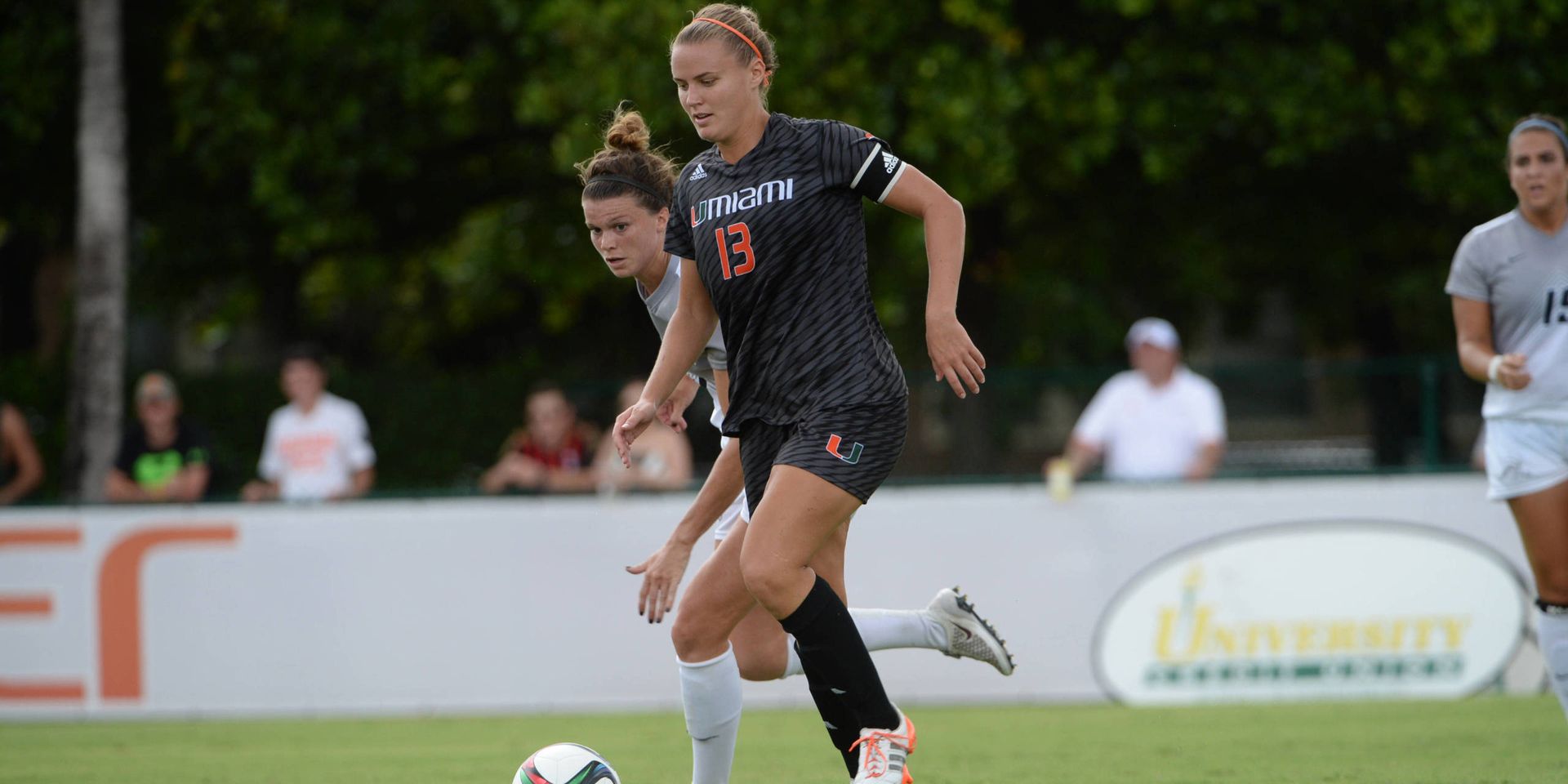 Miami (5-10-0, 2-6-0 ACC) led through 84 minutes of play, but the Orange tallied a late equalizer and then scored a golden goal in double overtime to earn the victory.

“Second half, we came out and put a lot of pressure on Syracuse and created many opportunities, but didn’t finish early,” Miami head coach Mary-Frances Monroe said. “. . . This is a disappointing loss and we will look to bounce back for Sunday’s game.”

Miami had two chances in fairly quick succession late in the first half. In the 32nd minute, senior midfielder/defender Natalie Moik made an outstanding play with the ball at her feet to get a shot from close range. However, Syracuse (6-10-1, 2-6-0 ACC) sophomore goalkeeper Courtney Brosnan had some magic of her own, managing to get a leg on it and deflect the ball out of bounds.

In the 36th minute, sophomore forward/midfielder flicked on a header to Erin McGovern in the box and the redshirt senior midfielder buried it in the back off the net. Miami was ruled to be offside and the goal was disallowed. The contest would go on to remain scoreless at the break, as goalkeeper Catalina Perez was superb for the Hurricanes in the opening 45 minutes as well.

The redshirt sophomore from Boca Raton, Fla. continued her strong play into the second half. Perez, who logged six saves, had three key plays in the four-minute stretch to help keep the match scoreless and allow Miami to take the lead.

Two minutes after Perez finished her stellar stretch, the Hurricanes broke through for a goal. Freshman midfielder Ainsly Wolfinbarger, who missed the last match at No. 12/7 Virginia Tech due to injury, played in a beautiful corner kick right to McGovern. The Oradell, N.J. native elevated and headed the ball past Brunson, putting Miami on the scoreboard.

“Erin finished a wonderful goal off a wonderful corner from Ainsly,” Monroe said. “I am proud of her.”

McGovern’s goal was the Hurricanes’ sixth shot attempt in the first 13 minutes of the second half, as the team came out with a renewed vigor offensively after the break.

Although Miami continued its strong play, Syracuse was able to pull level in the 85th minute. Sophomore forward Eva Gordon crossed the ball in to Jackie Firenze and the senior midfielder finished from six yards out. With no tallies in the final five minutes, the match went to extra time even at one apiece.

Neither side got much going in the first session of overtime and the match went on to a decisive second extra session. Just 34 seconds into the final period of play, Syracuse sophomore forward Alex Lamontagne received a well-played through ball from junior forward Stephanie Skilton and beat a diving Perez to end the match.

Despite the defeat, Perez still managed to record at least a half dozen stops for the fifth time in eight appearances. Additionally, junior forward Gracie Lachowecki logged a match-high four shot attempts.

For more information on University of Miami soccer, follow @CanesFutbol.