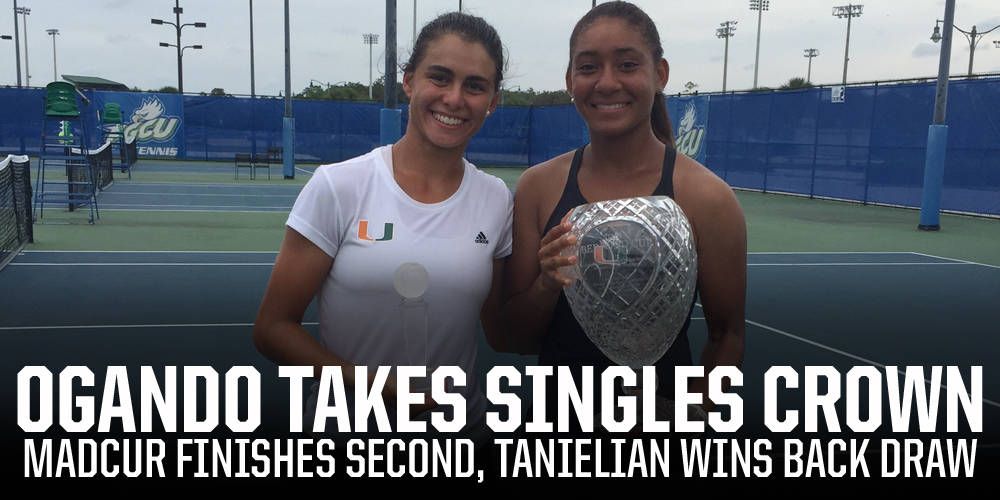 A day after winning the Doubles A Draw at the FGCU Tennis Complex with teammate Wendy Zhang, the sophomore from the University of Miami women’s tennis team earned the Singles A Draw trophy, too. Ogando is now 11-0 on the season and has won two singles tournament crowns.

“Yoli has to keep working hard on what she is doing at every stage of her tennis matches,” Miami associate head coach Laura Vallverdu said. “She cannot lose sight of the big picture, but she took care of business with pride.”

Ogando, ranked No. 94 and seeded second, opened the day with a comeback victory over fellow Miami sophomore Silvia Fuentes in the semifinals. Fuentes won the first set without dropping a game, but Ogando won the second in tight fashioned and controlled the third for a 0-6, 7-5, 6-2 victory.

In the other semifinal contest, also featuring two Hurricanes, freshman Ana Madcur earned a victory after she dropped the first set against Zhang, a sophomore ranked No. 73 and seeded first. Madcur fought back for a 3-6, 6-4, 6-4 win, the first of her career over a ranked player.

“We are so happy for Ana Madcur,” Vallverdu said after the freshman’s impressive run to the final. “She is the tangible definition of hard work paying off. I can’t wait to keep seeing her development.”

In addition to Ogando, Clara Tanielian also earned a pair of victories Sunday, as she claimed the Singles A Back Draw title. The freshman first topped Eveline Lepinay of Stetson 6-1, 6-1 and then knocked off FGCU’s Breana Stampfli, 6-3, 1-6, 1-0 (10-7) in the final.

No. 63 Clementina Riobueno also closed her showing at the Bedford Cup with a victory in the Singles A Back Draw Southwest Consolation semifinals. The senior, who was seeded third, won 6-0, 6-2 over Florida Atlantic’s Ana Gutierrez. The final of that consolation back draw was not played.

Overall, Miami went 26-9 between singles and doubles competition at the Bedford Cup and added another win via walkover. Four of the nine losses came in matchups pitting Hurricanes against one another.

“The team represented Miami in a professional manner this weekend and that is what we always ask for,” Vallverdu said. “[We are] looking for more of this [type of play] next weekend though.”

Miami will be back in action Oct. 22-26 at the USTA/ITA Southeast Regionals in at the Dan Magill Tennis Complex in Athens, Ga. That will be the final fall tournament for the majority of the Hurricanes.

To stay updated on the latest news about the University of Miami women’s tennis program, follow @CanesWTennis.