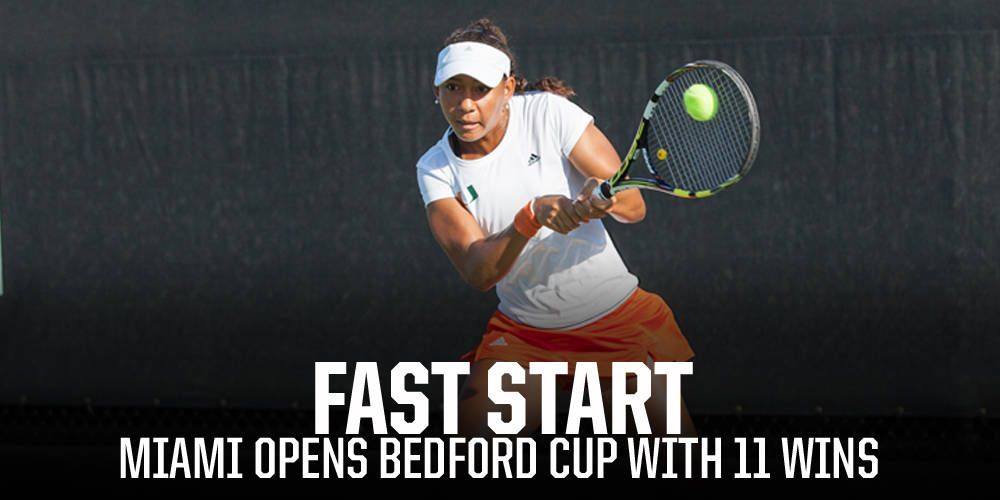 Sophomores Wendy Zhang and Yolimar Ogando, seeded first and second respectively in the Singles A Draw and joining forced as the top-seeded duo in the Doubles A Draw, helped lead the way with unblemished records.

“Yolimar and Wendy are intricate parts of our program now in their second year,” Miami associate head coach Laura Vallverdu said. “If they do what they did today more days than not, we are a different team.”

No. 63 Zhang and No. 94 Ogando both received first round byes in the Singles A Draw and then rolled to dominant victories in the round of 16. Zhang downed North Florida’s Noemi Hemmerich 6-3, 6-2 and Ogando won 6-2, 6-3 over Mina Matsuba of Bethune-Cookman.

Two other Hurricanes also advanced to the quarterfinals of the Singles A Draw, as sophomore Silvia Fuentes and freshman Ana Madcur each won both of their matches on the first day without dropping a set.

Miami went 6-2 in singles action, with both losses coming in the opening round. Senior Clementina Riobueno, ranked No. 63 and seeded third, fell 4-6, 2-6 to FIU’s Maryna Veksler and freshman Clara Tanielian dropped her match to fourth-seeded Emily Fanning of Florida State, 3-6, 4-6.

In the Doubles A Draw, all three Hurricane pairs won their opening round matches. Ogando/Zhang cruised past Vera Bessonova and Chloe Murphy of USF, 6-0, while Fuentes/Riobueno won 6-1 over UCF’s Diana Dehterevich and Emilia Granstrom and Madcur/Tanielian topped Cortes Chaves and Roman Dominguez, 6-3.

Two Miami duos also won their quarterfinal contests, with Ogando/Zhang downing Cassie Pough and Jazz Whittaker of FAU, 6-3, and Fuentes/Riobueno defeating FGCU’s Elizabeth Means and Breana Stampfli, 6-2. The Hurricane pairs will face off against each other in Saturday’s semifinals.

The other Miami duo, Madcur and Tanielian, fell 3-6 to Veksler and Nina Nagode of FIU in their quarterfinal contest.

Singles play will resume at 8 a.m. Saturday morning and doubles competition is scheduled to pick back up at 3 p.m.

To learn more about University of Miami tennis, follow @HurricaneTennis.