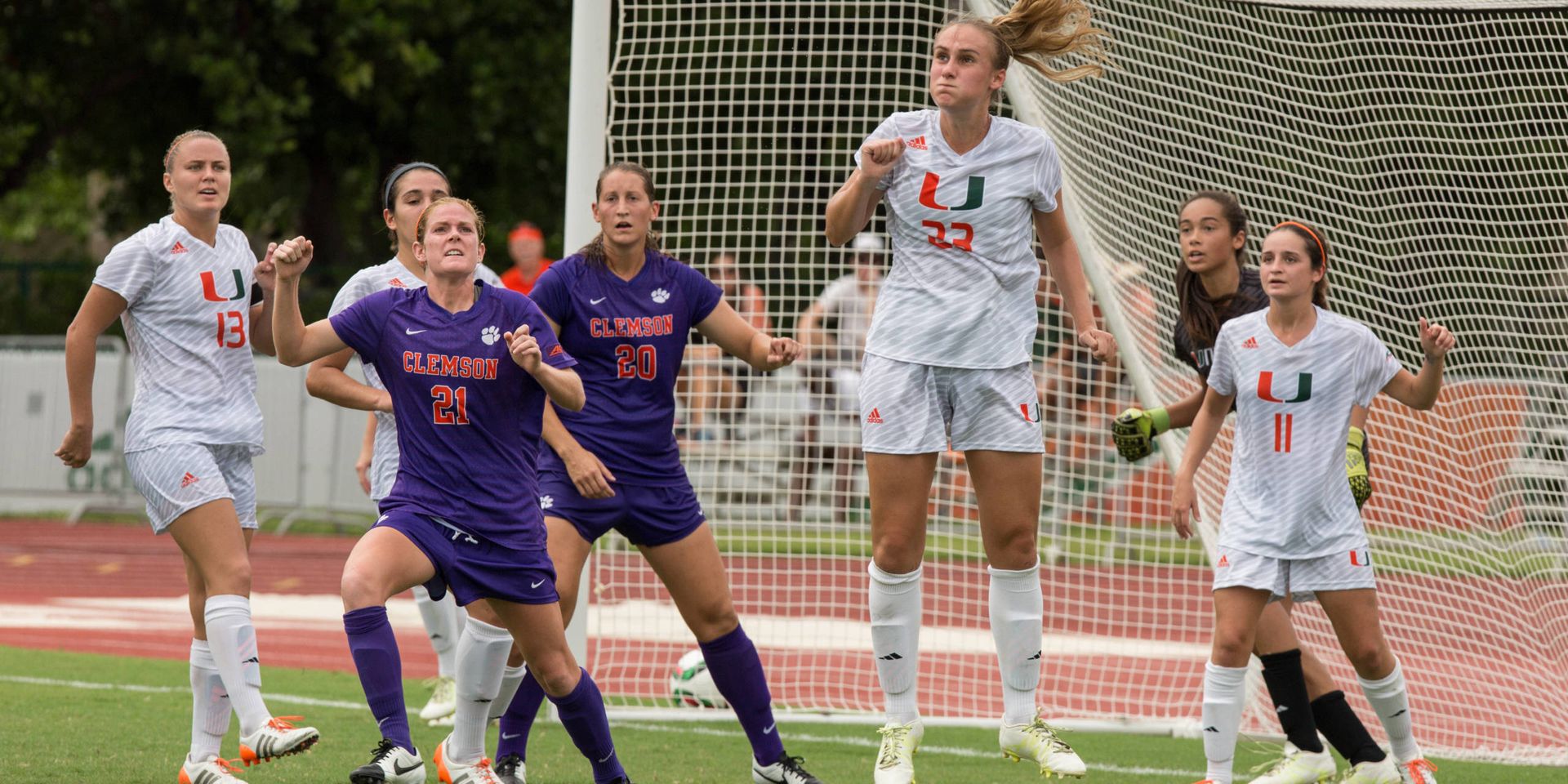 CORAL GABLES, Fla. – The University of Miami soccer team was right there with one of the nation’s top 10 teams for 105 minutes Sunday afternoon, but four minutes into the 106th Clemson struck for the match winner.

The Hurricanes scored first, but fell 2-1 in double overtime against the No. 7/5 Tigers at Cobb Stadium in the team’s ACC home opener.

Miami (3-7-0, 0-3-0 ACC) opened the scoring in the 12th minute on a beautiful goal that originated with a free kick in its off half off the foot of freshman defender Maisie Baker. She sent it up the field to sophomore forward/midfielder Grace Rapp, who touched it on to midfielder/defender Natalie Moik. The senior played it to a sprinting Gracie Lachowecki and the junior forward put it in the back of the net.

“She just fought her way in,” Miami head coach Mary-Frances Monroe said. “We worked on trying to be a little more direct and she was able to get on the end of a ball and finish a great shot.”

Clemson (8-1-1, 2-1-0 ACC) managed to pull level just before the half. Junior forward/midfielder Catrina Atanda found junior forward Paige Reckert, who sent the ball into the six-yard box to junior defender Jenna Weston and she scored a 44th minute equalizer.

Neither team was able to pull ahead in the second half, although sophomore forward Ronnie Johnson and freshman midfielder Ainsly Wolfinbarger both had superb chances in the final minute. Johnson’s shot stayed just wide and hit the side netting, while Wolfinbarger’s attempt was gloved by Clemson junior goalkeeper Kailen Sheridan.

After no goal was scored either way in the first overtime session, the match went to a decisive second 10-minute period and it was then that Clemson buried the golden goal. Junior defender Emily Byorth took a free kick that bounced in the box and sprang into the net to give the Tigers the victory.

Following the match, Jill Ellis, who coached Monroe in college and coached the U.S. National Team to the 2015 FIFA Women’s World Cup, was honored in front of the large crowd at Cobb Stadium. She was then a guest at a post-match clinic and signed autographs for the kids in attendance.

“It’s honestly why it was so special because I knew if we won, it would be something that would be life-changing for a lot of little kids, that they can dream about doing that,” Ellis said of the reception she received from the young kids. She went on to add, “I’ve been out to a few [Miami games] already. We still have six games left this fall, so I’m still traveling a fair bit, but I’m a fan of soccer and this is obviously the local team and I have a connection with Mary-Frances, so it’s fun to come out and watch.”

To keep up with the University of Miami soccer team on social media, follow @CanesFutbol.