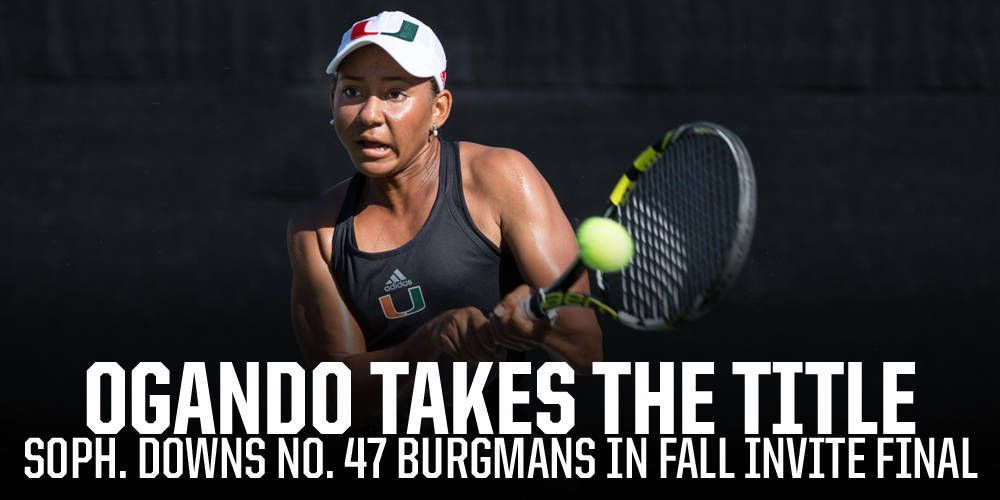 CORAL GABLES, Fla. – Entering the first weekend of the 2015 fall season, sophomore Yolimar Ogando of the University of Miami women’s tennis team had never so much played a ranked opponent.

Following the weekend, Ogando has defeated three, including two in the top 50, and has a Miami Fall Invite Orange Singles Draw championship to show for her efforts. Ogando, ranked No. 94, knocked off No. 47 Pleun Burgmans of Auburn, the top seed in the draw, 7-6 (7-5), 7-5 in the final Sunday.

“It was nice and refreshing to see that she may be up for the real challenge this year,” Miami associate head coach Laura Vallverdu said of Ogando.  “We are ready for it.”

Ogando previously downed No. 49 [1] Frances Altick of Vanderbilt and No. 77 Alizee Michaud of Auburn Saturday to reach the final. Her victory over Burgmans gave Miami the title in two of the four draws in the tournament, as freshman Clara Tanielian and sophomore Wendy Zhang won an all-Miami finale in the Orange Doubles Draw Saturday.

In addition to Ogando, freshman Ana Madcur also picked up a victory on the final day of the Miami Fall Invite. The San Juan, Argentina native won her third match in a row, defeating Auburn’s Alannah Griffin, 75, 6-2, to win the Green Singles Consolation Draw final.

Tanielian came up just short in the Green Singles Main Draw third place match against top-seeded Miho Kowase of Ohio State. The Buckeye battled back from a second-set deficit after dropping the first to earn a 2-6, 6-3, 1-0 (10-6) win over Tanielian.

Overall, the Hurricanes went 19-12 in the Miami Fall Invite, earned another win via walkover and had one of its losses come in a matchup between two Miami pairs.

“We had a good weekend of tennis and teaching lessons. [It was] exactly what I was looking for with this group,” Vallverdu said. “Results are fun when you work towards them during the week with your teammates and coaches. I am happy with most of the girls’ showings this weekend.”

Along with the action in Coral Gables, sixth-ranked Stephanie Wagner wrapped up play for Miami at the Oracle/ITA Masters in Malibu, Calif. The senior won a pair of matches over top-20 players Saturday, including earning the 100th victory of her career, to reach Sunday’s singles consolation final. There, she fell 6-2, 6-3 to No. 16 Klara Fabikova of Cal at the Malibu Racquet Club.

The Hurricanes will be back in action Sept. 25-27 when they travel to the Puerto Rico Fall Classic, in what will be a homecoming for Ogando, a native of Carolina, Puerto Rico.