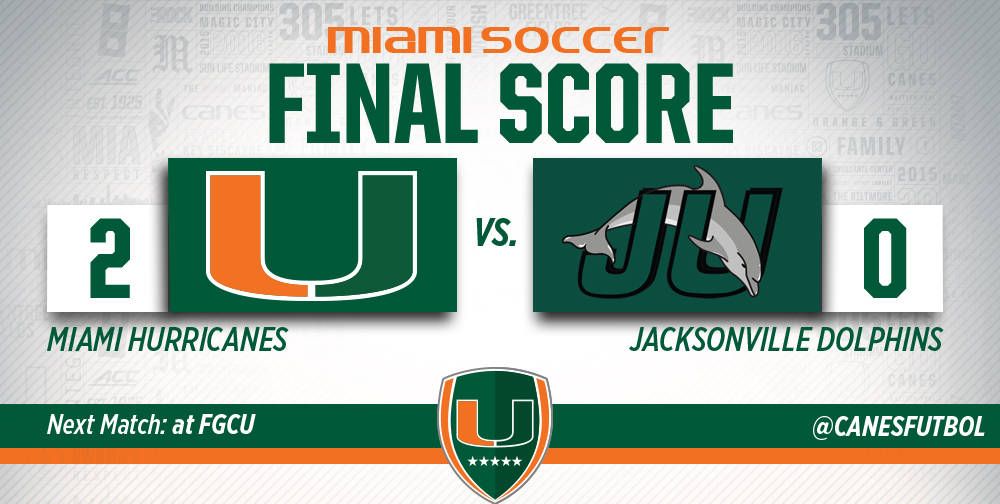 JACKSONVILLE, Fla. – Senior forward Amy Schmidt recorded the first brace of her career to help the University of Miami soccer team to a 2-0 win at Jacksonville Sunday afternoon.

Following an hour-plus lightning delay that began under a minute after opening kickoff at Southern Oak Stadium, the Hurricanes put forth a dominant effort to earn the road victory.

“I am so proud of the team today,” Miami head coach Mary-Frances Monroe said. “We put together an entire 90 minutes of good soccer. We dominated on specifics we talked about and executed our plan.”

Schmidt received a pass from senior midfielder/defender Natalie Moik and found herself one-on-one with Jacksonville (1-3-1) sophomore goalkeeper Sara Wicks. The Lenexa, Kan. native beat Wicks and put the ball down the middle to make it 1-0 Hurricanes in the fourth minute.

Miami continued to keep the pressure on throughout the first half, despite not tallying another goal before the break. After the opening 45 minutes, the Hurricanes held a 12-1 edge in shots, a 5-1 advantage in shots on goal and 4-1 lead in corner kicks.

Not long after the second half got underway did Schmidt again score for Miami. Freshman midfielder Ainsly Wolfinbarger, making the first start of her career, hit the crossbar and the ball came out to Moik. She then played it back to Wolfinbarger, who tapped it along to Schmidt to earn the assist, and the senior put it in the back of the net.

“I am ecstatic with Amy’s performance as a whole today,” Monroe said. “Not only did she score two great goals, but she showed how she never gives up and wants to be a leader on this team. [In addition], Ainsly stepped up today playing her first [full] 90 minutes and was an engine to our attack. Gianna [Dal Pozzo] held the back line to minimal shots on goal.”

Wolfinbarger has now logged an assist in back-to-back matches, while Moik tied her career high with two assists, set Nov. 7, 2013 vs. Dayton when she was a sophomore at VCU. Redshirt freshman Phallon Tullis-Joyce had three saves to tally the the first win and shutout of her career.

For the Hurricanes, the 2-0 win marked the team’s first shutout since a 3-0 victory over Stetson Sept. 5, 2014. Miami finished with 27 shots, while conceding just five, and had a 10-3 advantage in shots on goal and an 8-2 edge in corner kicks.

To keep up with the University of Miami soccer team throughout its 2015 campaign, follow @CanesFutbol.