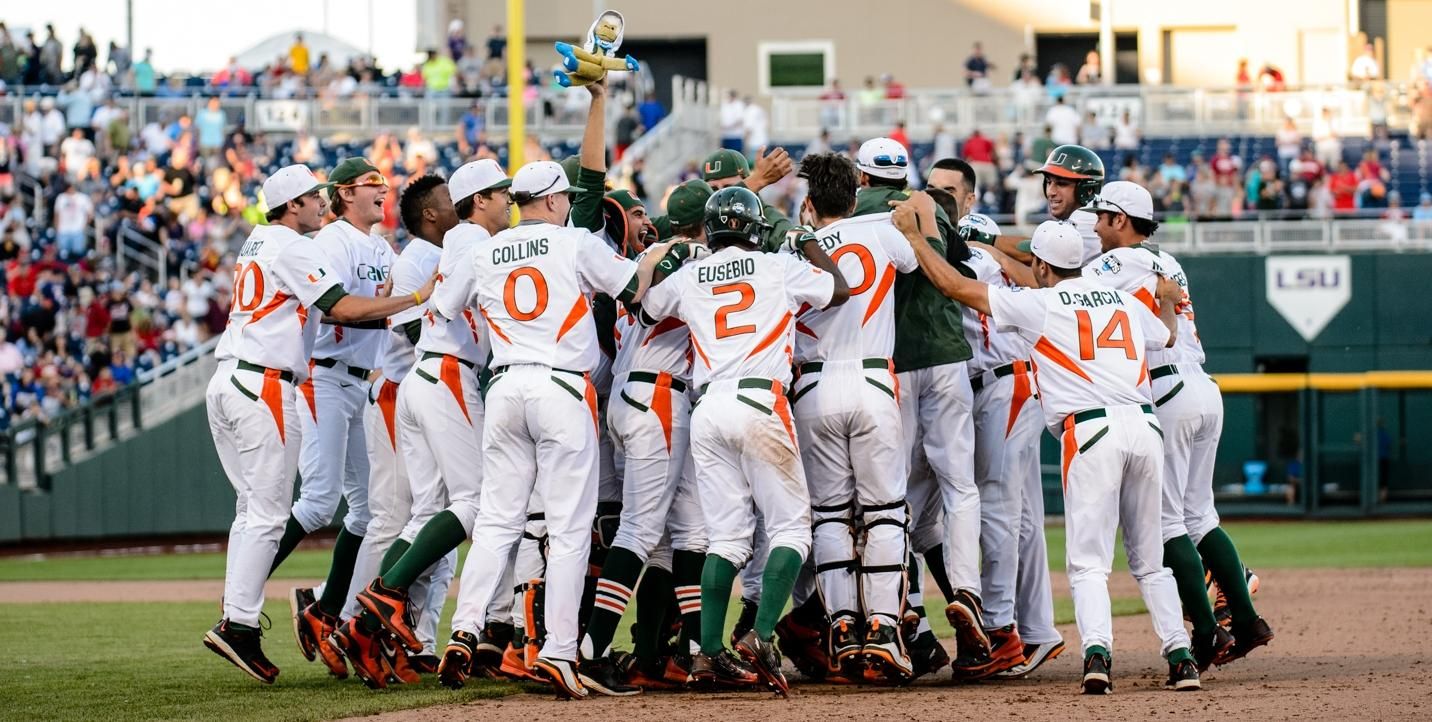 Sophomore left fielder Jacob Heyward etched his name into Miami’s illustrious postseason history Monday, as he powered the Hurricanes to a 4-3 victory over Arkansas in an elimination game at the 2015 College World Series.

The team’s nine-hole hitter connected on a walk-off single in the bottom of the ninth, sending his teammates into a frenzied celebration and extending the Hurricanes’ season at least until Wednesday night.

Heyward added a two-run home run in a 3-for-3, three-RBI performance, clinching Miami’s 20th 50-win season in history and first such year since 2008.

When the hero was introduced in his postgame press conference at TD Ameritrade Park Omaha, head coach Jim Morris was quick to correct the moderator on his sophomore’s new moniker.

“That would be Mr. Heyward,” Morris joked. “Goodness gracious. He had an unbelievable day from the two-run homer to everything.”

Heyward, who has started the past 15 games in left field after serving as a late defensive replacement for the majority of the regular season, reached base four times, none more important than his game-winning single to center off top Arkansas reliever Zach Jackson.

Morris recalled a conversation with Heyward earlier in the season that resonated after the game.

“I called him in just to talk to him and make sure that he understood I still believed in him, to keep his head up because he wasn’t playing,” Morris said. “And his response was, ‘You don’t worry about me, Coach.’

Heyward held true to his word, leading Miami to its first CWS win since 2008. His RBI single in the ninth scored pinch runner Carl Chester, who entered after sophomore Willie Abreu opened the inning with a double.

“I’ve been missing workouts, honestly,” Abreu said with a smile when asked if he thought his double might clear the fence. “No, I’m kidding…I feel like I just wanted to get a good swing on the ball, be able to get on base and be able to do something for my team.

The two teams traded runs in the late innings, with Miami jumping out to leads of 2-0 and 3-2. Arkansas tied the game on both occasions, and threatened to go ahead in the ninth before Bryan Garcia (6-2) shut the door on a bases-loaded situation.

“I want to congratulate Arkansas on their season. They did a great job every inning coming back…kept answering back,” Morris said. “That’s a credit to a good team. They kept battling. You could see why they won and why they’re in the World Series.”

Junior lefthander Thomas Woodrey delivered a dominant effort on the hill for the Hurricanes, helping Miami knock out the Razorbacks in the first elimination game of this year’s CWS.

A little over a week after a disappointing start in a super regional game vs. VCU, junior lefthander Woodrey rebounded with one of his most dominant outings of the season: 6.0 innings, three hits and just one unearned run.

Miami’s offense was stifled for much of the early going by Razorbacks righthander Keaton McKinney, and did not register a hit until a two-out double by Zack Collins in the fourth inning.

Woodrey was up to the task, however, matching McKinney’s zeros with five scoreless innings of his own to open the game. The Lighthouse Point, Fla., native surrendered just two hits through the game’s first five frames.

“The game had a feeling that it was kind of back and forth, bunch of zeros in the beginning,” Woodrey said. “And honestly that was a really good lineup today. They battled pretty hard. And I was just trying to keep putting up zeros.”

A leadoff single from senior Garrett Kennedy to open the fifth was followed by a Brandon Lopez lineout to right, signaling the end of McKinney’s day after 4.1 innings. The righthander, who was pulled with a hip injury in the team’s super regional vs. Missouri State last time out, struck out three batters and walked just one in a resilient outing.

Miami took advantage of the pitching change in a hurry, as Heyward cracked a two-out, two-run home run to left field off Razorbacks reliever Jackson Lowery in the same half-inning to give Miami a 2-0 lead.

“I just wanted to do the best I could for my teammates,” Heyward said of his performance. “I felt they deserved that and we all know we worked hard all season and just had fun and played the game hard for my team.”

The home run was the first for a Hurricane in the CWS since current Los Angeles Dodgers Yasmani Grandal connected on a solo shot in Miami’s last trip to Omaha in 2008.

Arkansas halved Miami’s lead with an RBI single from Rick Nomura in the sixth, but Woodrey struck out Razorbacks designated hitter Brett McAfee to end the inning and maintain Miami’s lead at 2-1.

Miami (50-16) will play the loser of CWS Game 6 (between Virginia and Florida) on Wednesday night at 8 p.m. E.T. in another elimination game.

“Both [teams] are hot,” Morris said. “Virginia’s been hot and Florida’s been hot. They’re both outstanding clubs, both playing well and everybody out here is good.”