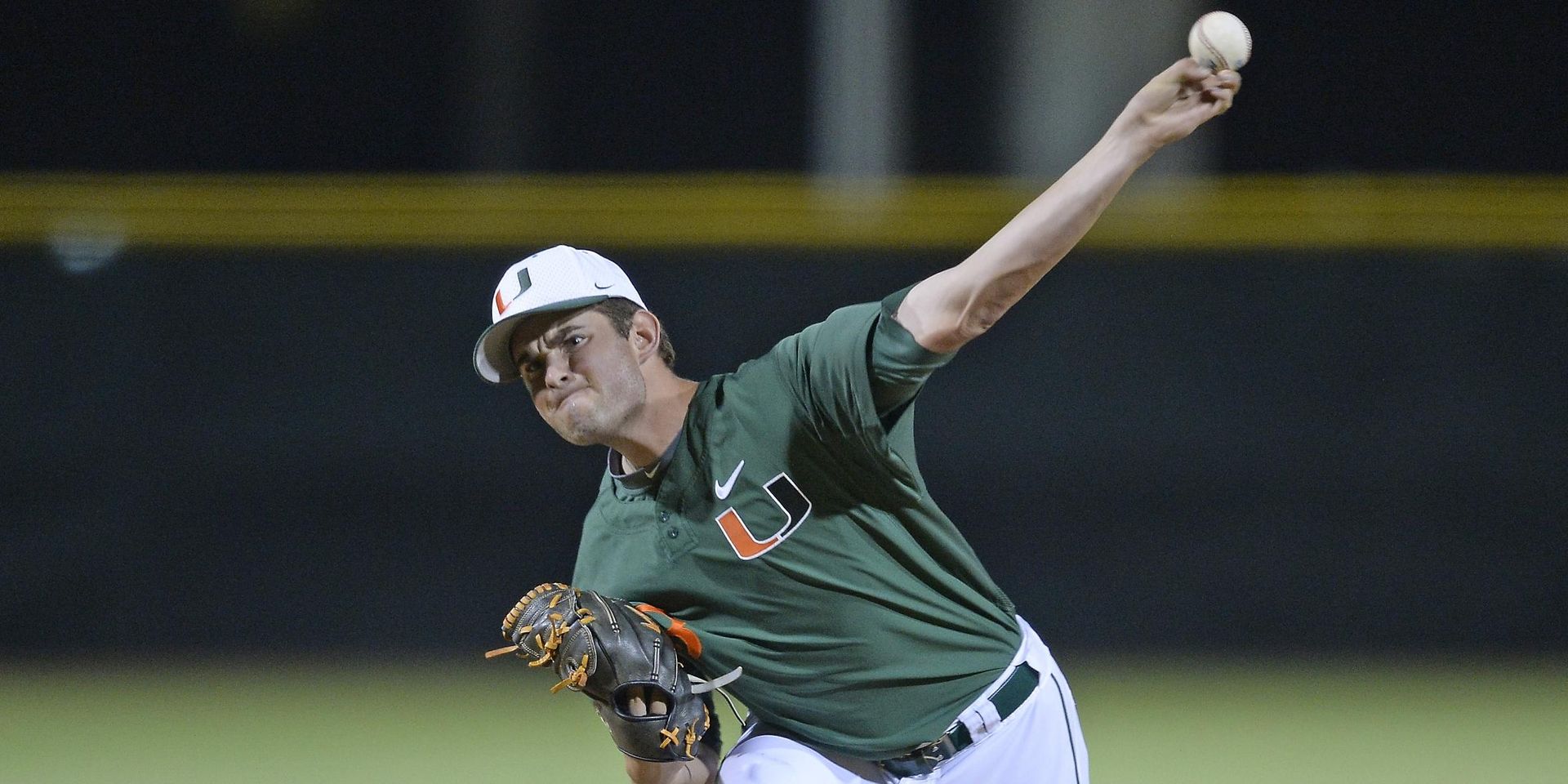 The Hurricanes, who opened their postseason run with a 6-2 victory over No. 4 seed FIU, will play the winner of an afternoon elimination game between the Lions and Panthers Sunday night looking to clinch the 28th regional title in program history.

“I thought it was a hard-fought game,” head coach Jim Morris said. “Columbia played hard until the end, and that was part of their scouting report – those guys never quit. They have a good club.”

Miami (46-14) will have a second opportunity to capture the regional title Monday night if it fails to do so Sunday (7 p.m.).

“It’s a big win for us. It puts us in the driver’s seat – we just have to get it done now to finish it off,” Morris said.

The Hurricanes’ hot-swinging bats tagged Columbia starter for Kevin Roy for six runs in just 3.2 innings, including four in the second, to jump out to an early lead for the second straight night.

Junior David Thompson extended his hitting streak to eight straight games with a single to open the second, and wound up on third after a walk from senior Garrett Kennedy and a single from junior Brandon Lopez.

Sophomore Willie Abreu delivered the first big hit of the game, a bases-loaded double sliced to the wall in left that plated two runs and sent the 3,315 into early celebration.

Miami enjoyed similar results Friday night, plating six runs over the first two innings of their Regional opener to cruise to a spot in the winners’ bracket.

“We thrive on that in the locker room and the clubhouse – we like to get out in front in the beginning [of games],” Abreu said. “That keeps momentum on our side, and we build on that.”

Sophomore Jacob Heyward connected on an opposite-field RBI single, and a fielder’s choice RBI from redshirt sophomore Christopher Barr capped the scoring at 4-0.

“We had some good plays, and some big hits, and there were a lot of guys who contributed offensively to make it happen,” Morris said.

“It gives me confidence,” Woodrey said of pitching with a sizable lead for most of the game. “When we get ahead like that, which has happened a lot this season, it lets you settle down, you go out there and you know that you can just throw strikes, try to get ahead and let your defense work for you.”

The Canes added two runs in the fourth to chase Roy (6-4). Walks to Abreu and juniors Ricky Eusebio and George Iskenderian loaded the bases and prompted a pitching change, as the Lions called in lefthander Mike Weisman to face sophomore Zack Collins.

The slugger beat the left-on-left matchup, however, cracking a two-RBI single into right to pad Miami’s lead to 6-1.

Woodrey (7-2), who surrendered three earned runs and struck out five, departed with two outs in the sixth, giving way to sophomore lefthander Danny Garcia with his team leading 7-3.

All three of Columbia’s runs against Woodrey came on homers: a solo shot from Gus Craig in the second and a two-run shot from David Vandercook in the fourth.

“It was big to have a lead the entire game, and that helped keep me calm,” Woodrey said. “I just went out there and my goal was to get us back in the dugout, to keep us ahead, keep the lead and let our offense power us through this win.”

Miami added insurance on an RBI double in the sixth from Iskenderian and an RBI single in the eighth from Collins.

Collins, who reached base for the 21st straight game, finished 2-for-5 with three RBI, marking his 16th multi-RBI performance of the season.

Miami will take on the winner of Sunday’s 1 p.m. elimination game between Columbia and FIU at 7 p.m. Sunday night in a game slated for broadcast on ESPN3, 560 WQAM and WVUM 90.5 FM.