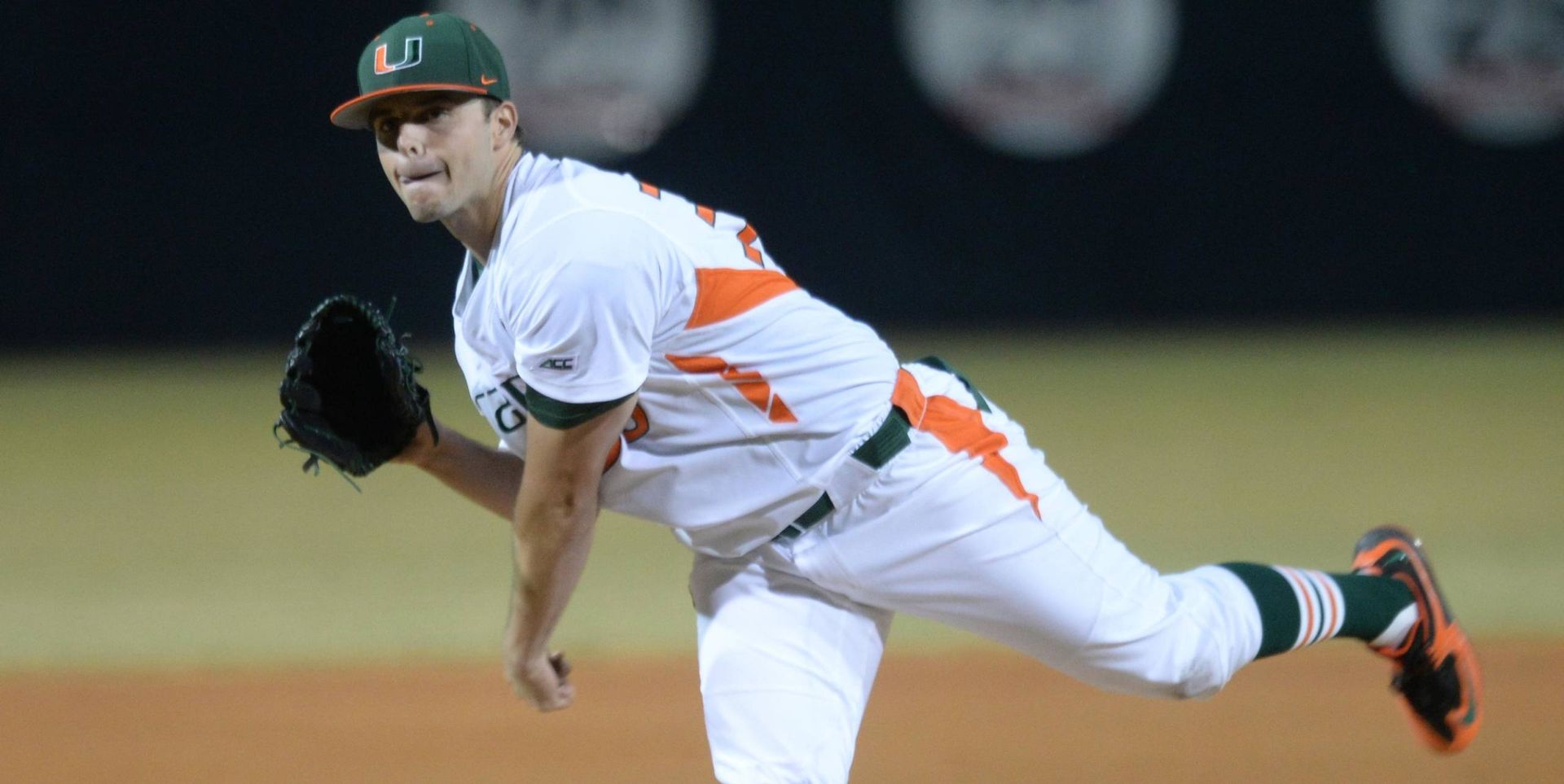 The Hurricanes (45-14) scored four runs in the first, added a pair in the second, and dominated in their first game against the Panthers since 2008 to set up a winners’ bracket matchup with No. 3 seed Columbia.

Suarez, who tossed a complete-game shutout in last season’s Coral Gables Regional opener against Bethune-Cookman, duplicated his magic Friday. The southpaw scattered seven hits – all singles – and allowed just two runners to reach as far as second base in his 7.0+ innings of work.

He struck out five, did not walk a batter, and exited to a standing ovation in the eighth inning.

Suarez said he had command for his three best pitches – fastball, changeup and slider.

The Miami native was charged with two earned runs after departing, as FIU connected for two RBI groundouts off reliever Cooper Hammond in the eighth inning.

Junior David Thompson, a USA Baseball Golden Spikes semifinalist, paced the offensive attack with three hits. His two-RBI double down the left field line in the first inning put Miami ahead 3-0, while an RBI single in the second padded Miami’s lead to six runs.

FIU righthander Andres Nunez settled down after the rough start to pitched 6.1 frames. He tossed 119 pitches, striking out four and walking four.

Miami jumped over Nunez (6-6) in the early going, opening the scoring on a fielder’s choice RBI from George Iskenderian and tacking on two more on Thompson’s extra-base hit down the leftfield line. With the bases loaded after a Garrett Kennedy walk and Brandon Lopez hit-by-pitch, an RBI groundout from Willie Abreu made it 4-0.

A sacrifice fly from Iskenderian and Thompson’s RBI single made it 6-0 in the second and sent the crowd into a frenzied celebration.

“It was awesome. It was a fun game…It hasn’t been that loud once since I’ve been here,” Thompson said. “It was a lot of fun, to be in that atmosphere, all those fans on both sides cheering.”

Thompson’s RBI single in the sixth bolstered his season total to a nation-leading 83, tying Mike Fiore (1988) for the fourth-most in a single season in Miami history.

Thompson said the three errors committed by FIU (29-30) in the game’s first two innings aided the Hurricanes’ cause.

“We took advantage of [the errors],” Thompson said. “We hit well with runners in scoring position. We need to do a better of hitting throughout the whole game, but it’s always nice to get off to a good start like we did today.”

Suarez (8-1) did not allow a runner to reach second until the seventh, when Edwin Rios and Josh Anderson singled. But he struck out slugger JC Escarra to escape one of his few jams of the night.

Head coach Jim Morris made a point to recognize Miami’s boisterous crowd, which forced a gate shutdown in the second inning as it neared capacity.

“I don’t remember the last time we closed the gates. It’s great coming out of the dugout looking down both lines and seeing people standing. It’s a great feeling,” Morris said.

Miami returns to Mark Light Field Saturday night for a matchup with No. 3 seed Columbia in a game slated for broadcast on ESPN3, 560 WQAM and WVUM 90.5 FM. No. 2 seed East Carolina and No. 4 seed FIU play in an elimination game at 1 p.m.