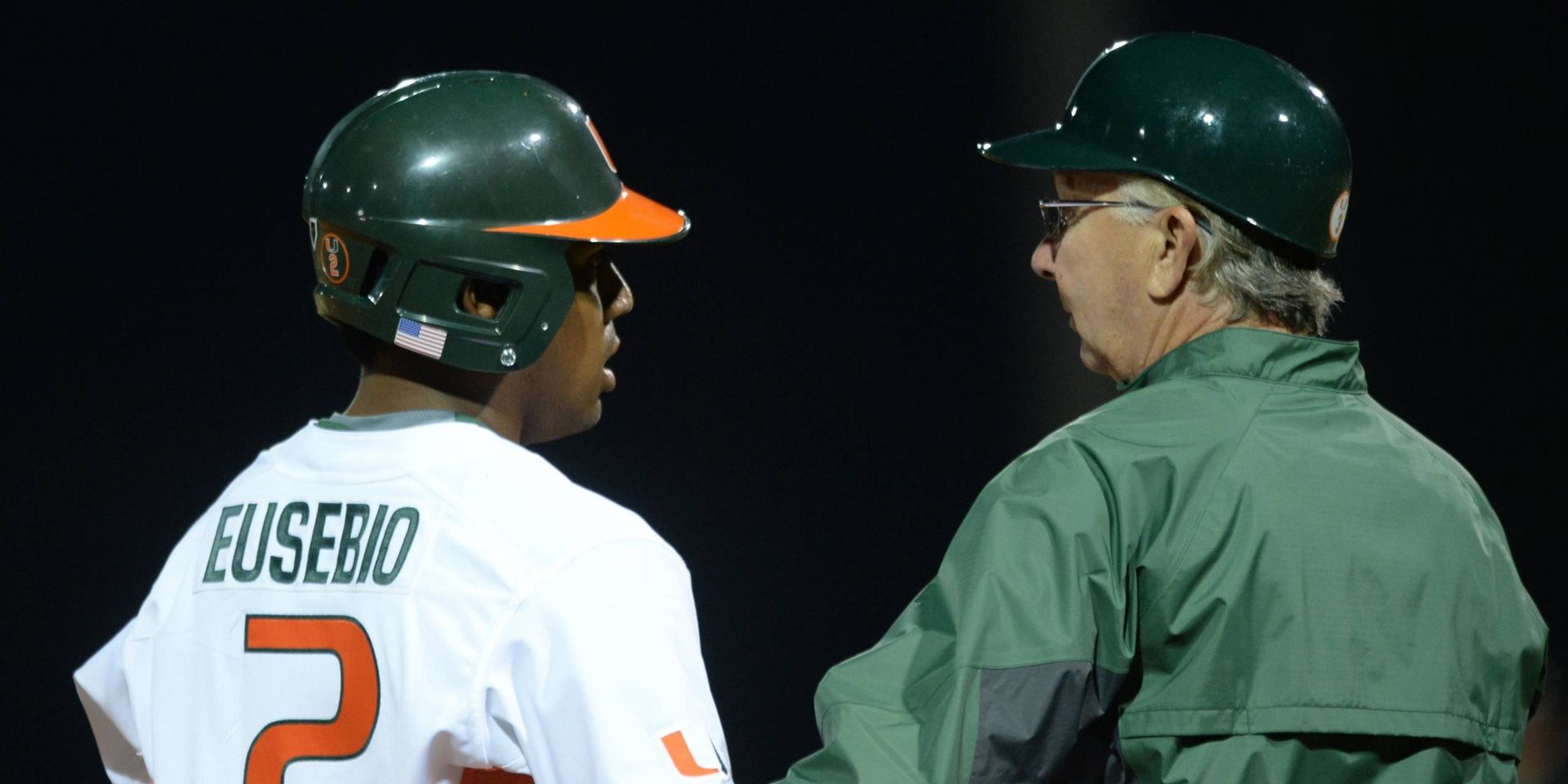 DURHAM, N.C. – Second-seeded Miami dropped a 5-4 decision in 12 innings Friday night at Durham Bulls Athletic Park, as the Hurricanes’ 13-game winning streak came to an end at the hands of No. 6 seed NC State.

NC State’s Preston Palmeiro led off the bottom of the 12th with a double off the wall in left field, then hustled around to score on a throwing error to lift the Wolfpack in front of a crowd of 6,808.

Eusebio was the catalyst for Miami’s first run, as he led off the game with a walk, took second on a sacrifice bunt from Christopher Barr and then wheeled his way home on an RBI single from George Iskenderian that dropped into rightfield.

A crafty slide from Eusebio doubled Miami’s lead in the top half of the third.

After back-to-back walks from Eusebio and Barr prompted an NC State pitching change, Wolfpack lefthander Will Gilbert walked Iskenderian to load the bases.

A shallow flyout from Zack Collins to left forced a play at the plate, and Eusebio slid in safe around the tag of Wolfpack catcher Andrew Knizner to give Miami a two-run lead on the sacrifice fly.

NC State (33-20) would strike for a pair in the ensuing half-inning, however, as a two-RBI single from Logan Ratledge to left knotted the game 2-2.

Suarez did a nice job of buckling down, however, stranding two Wolfpack batters in the inning with back-to-back strikeouts of Preston Palmeiro and Joe Dunand to keep the game tied 2-2

Miami regained the lead with a pair of its own in the fourth, coming on an RBI single from Eusebio that scored junior Brandon Lopez and an RBI groundout from Iskenderian that saw Eusebio cross the plate for the third time on the night.

After a solo home run from Ryne Willard cut Miami’s lead to one run, Suarez buckled down once again after allowing the next two batters to reach. The talented southpaw induced a weak foulout from Fincher for the first out, and retired Josh McLain on a groundout to short to maintain Miami’s lead in front of a largely pro-Wolfpack crowd at Durham Bulls Athletic Park.

Suarez departed after six innings, having surrendered five hits, three earned runs and two walks in a quality start. He struck out eight batters, marking his second-highest output of the season, and gave way to the Miami bullpen after 96 pitches.

Miami’s All-American closer Bryan Garcia was tagged for a run in the ninth, but pitched a scoreless 10th to keep the game knotted at 4-4. After a quick 11th inning for both sides, freshman lefthander Michael Mediavilla (3-2) surrendered the leadoff double to Palmeiro that would prove to be the game-winner.

Miami returns to Durham Bulls Athletic Park Saturday for its Pool play finale against No. 3 seed Notre Dame. First pitch for the game, slated for brodcast on RSN (ESPN3 simulcast), 560 WQAM and WVUM 90.5 FM, is set for 3 p.m.