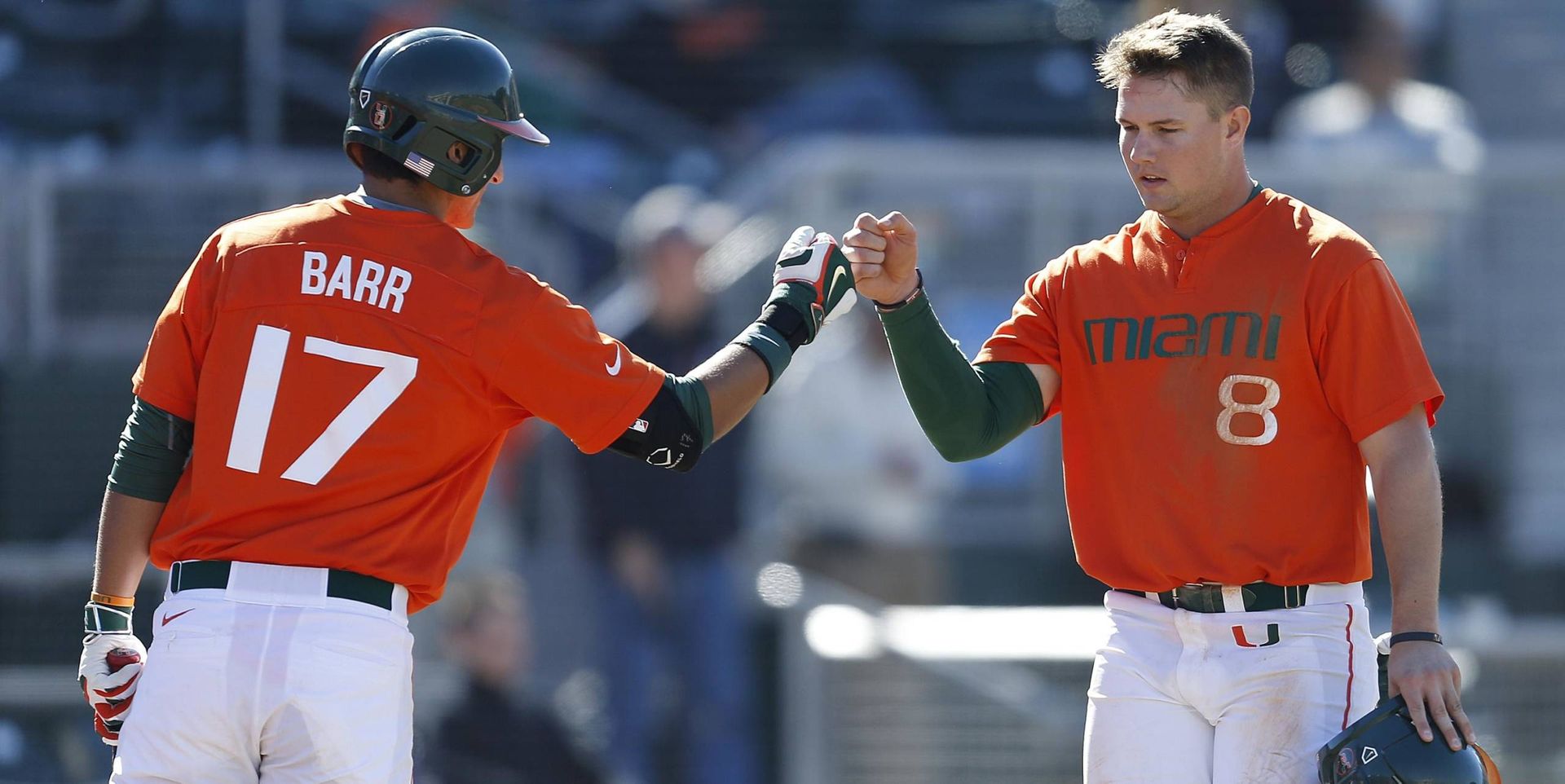 The reigning NCBWA National Hitter of the Week hit his second grand slam in as many games en route to a career-high seven-RBI performance, leading Miami to a 15-2 romp over Wake Forest in the series opener.

The Miami native, who opened his night with an RBI double in the first, added a two-run shot in the seventh inning, his team-leading eighth homer of the season. He extended his hitting streak to a career-best 12 games with another standout showing at the plate before being removed in the ninth.

Aided by another explosion from Thompson, Miami’s offense clicked on a night when Wake Forest started its top righthander in Pirro (5-1). Every Miami starter recorded at least one hit, while four – Thompson, Willie Abreu (2-for-4), Garrett Kennedy (2-for-5) and Johnny Ruiz (2-for-3) – recorded multi-hit games.

Miami outhit the hosts 15-7, with 10 different players recording a hit..

Miami’s offense got off to a quick start, plating three runs in the first inning to give starter Thomas Woodrey a comfortable early lead. RBI singles from George Iskenderian and Willie Abreu were sandwiched around an RBI double from Thompson, who cracked a Pirro offering to leftfield for his first hit of the night.

Though Wake Forest (14-9, 3-4 ACC) scored a run on an RBI single from Ben Breazeale to cut Miami’s lead to 3-1, the Hurricanes responded with seven runs in the second to chase Pirro and enter cruise control.

After loading the bases on two walks and an error to open the second, Miami nearly had its scoring opportunity foiled when Iskenderian’s lineout to center resulted in a double play at second base. But after sophomore Zack Collins drew his second walk of the game, Thompson cracked a 2-1 pitch from Pirro way over the leftfield fence for a grand slam.

Abreu followed Thompson’s shot with a single through the leftside, and a no-doubt two-run blast from Kennedy to rightfield signaled the end of Pirro’s night.

Woodrey (3-1) delivered another strong outing for Miami, pitching at least 6.0 innings for the fifth consecutive start. One week after missing his scheduled start to a stomach virus, Woodrey struck out four batters, walked just one and needed 89 pitches to get through a largely stress-free outing.

Junior Ricky Eusebio added his first career home run on a solo blast in the seventh inning, while Miami scored a pair of runs in the ninth on a wild pitch from Wake Forest reliever Will Finley.

Miami returns to Gene Hooks Field Saturday for game two of its series with Wake Forest. First pitch for the game, slated for broadcast on ESPN 3 and WVUM 90.5 FM, is set for 4 p.m.